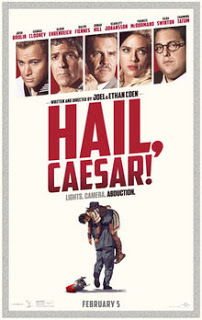 Joel and Ethan Coen's Hail, Caesar! is predicated on a wonderful conceit. A cell of left wing screenwriters are hijacking Capitol Pictures. They've kidnapped one of its stars George Clooney and have even converted him to the Communist mantra. "The studios are making them the instruments of capitalism," Clooney breathlessly tells his boss, the studio head Eddie Mannix (Josh Brolin). "The studios make pictures to serve the system." Trumbo, the story of a blacklisted writer was recently released, but in one fell swoop the Coen Brothers have turned the tables. The victims of the blacklist are now perpetrators, one of whom says, "we're not talking about money. We're talking about economics." In a particularly hilarious scene the group actually paddles out off the waters of Malibu to meet a Russian sub in front of which they pledge their allegiance to the Comintern. The film, set for the most part on the Capitol Picture lot, flips from a Western, to a Busby Berkeley musical to an English drawing room melodrama where one of the studio's cowboy stars, Hobie Doyle (Alden Ehrenreich) is being cudgeled into affecting an aristocratic "mirthless chuckle" as he's urged by his female counterpart to join her "on the divine" In a scene out of My Fair Lady the director, the effete Laurence Laurentz (Ralph Fiennes), futilely attempts to get his cowboy to say "would that it t'were so simple." But the major picture being filmed is Hail, Caesar! in which the studio's big star Baird Whitlock (Clooney) playing the Roman warrior Autolycus botches the last word of his last line "faith" as he stands by the feet of the dying Christ. Considering all the artifice the one believable character in the mix is Mannix himself played brilliantly by Josh Brolin. Amidst a series of set pieces which are satires of set pieces, Brolin is struggling to quit smoking and decide about a job offer from the Lockheed corporation which will provide him with a stability he will never find in Hollywood. The juxtaposition of Clooney being converted to Christ and Brolin talking to his priest in confession is a masterpiece of juxtaposition or shall we say montage. Teaser alert: Mannix chooses glamour over security. Among Mannix's many duties, which include having a pregnant actress adopt her own child to save face, is getting religious leaders behind the Christ story, a task that is obstructed by a recalcitrant rabbi who says about Jesus, "God doesn't have children; he's a bachelor and very angry." Hail, Caesar is hilarious in spots and wild. It's as if the Coen Brothers, intent to have fun, were pulling out all the stops But it's no match for Barton Fink, their paen to the murderous juggernaut they both hate and love. The irony is that in the vintage Hollywood the film describes George Clooney might very well have played Spartacus.