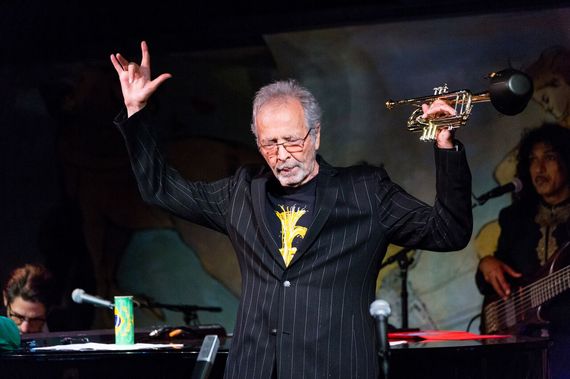 In 1966 I worshiped the Beatles and loved rock & roll. I was ten years old and would escape to my bedroom where I listened to AM stations on a transistor radio and played 45 rpm singles on a small portable record player. My parents had a fancy "hi-fi" system in the den that I wasn't allowed to touch and the only albums they listened to were folk music and show tunes, which by age ten had become totally uncool for me.

Then one day my father brought home a recording of Herb Alpert and The Tijuana Brass and for months it seemed to be the only thing we heard in our home, which was fine with me. There was something so joyous and fun about the music that I couldn't get enough of it. It was always a huge treat to go the local diner, and it became even more special because they had Tijuana Taxi on the small jukeboxes in every booth, and my mother played the song over and over throughout our meals.

Fifty years have passed since those memorable family meals in that Edison, New Jersey diner -- which is less than 35 miles from the Carlyle Hotel, where Herb Alpert and his wife Lani Hall are booked through June 11th. I saw them on Saturday night (backed by piano, bass, drums) and it's a bucket list experience. Alpert's accomplishments as a musician, record executive and philanthropist are remarkable and seeing him in this intimate setting is a wonderfully unique experience.

Alpert is a brilliant raconteur and could spend the evening telling stories, which he does between songs as his wife looks on adoringly. They clearly love one another and take equal joy in delivering an eclectic set list that runs from Van Morrison to Sammy Cahn as well as the Beatles. Hall's voice can fill a stadium yet she adapts perfectly to the small Café Carlyle venue and it often felt as if I were enjoying a performance in my living room. The entire band is exceptional and their jazzy Brazilian flair adds a different perspective to every song, especially those by Cole Porter and Irving Berlin.

I feel blessed that I was able to see them and I urge everyone to do the same. I will return again before June 11th.