UPDATE: Hailey Baldwin said she "wasn't meaning to be racist."

Clearly I wasn't meaning to be racist with my tweet I was making a joke about getting a tan. Everybody chill

I apologize if I offended anyone. Was meant to be a joke! xx

EARLIER: Ohhh, Hailey Baldwin. What were you thinking?

Early this morning, Baldwin, a blonde, hazel-eyed Ford model who's buddy-buddy with the Jenners, tweeted this from her account: 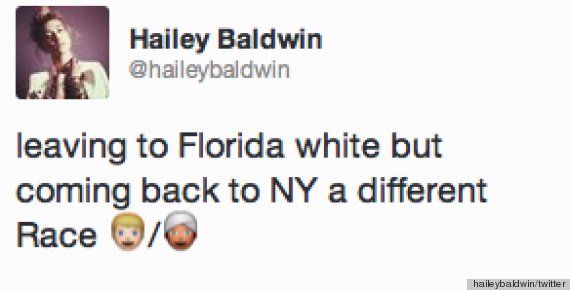 The incredibly insensitive tweet, which declared that Baldwin was "leaving to Florida white but coming back to N.Y. a different race" was also accompanied by a turban emoji. The tweet was taken down no less than 15 minutes after it was originally tweeted. Perhaps it was the outrage of her Twitter followers, or a sudden burst of common sense that made the 17-year-old social-media queen delete it.

@haileybaldwin that's not racist at all

“@haileybaldwin: leaving to Florida white but coming back to NY a different Race ￰ﾟﾑﾱ/￰ﾟﾑﾳ” chill hailey

Baldwin's cousin Ireland also faced a major racist Twitter controversy back in September, with father Alec quickly coming to her defense. For a family that's no stranger to controversy, we certainly hope Hailey learns from this misstep.