Human skeletal remains were found on Tuesday in Big Spring, Texas, not far from where Colorado City teen Hailey Dunn disappeared more than a year ago.

A source close to the investigation told The Huffington Post that some people believe the body could be Dunn's but cannot be certain until dental records are compared.

Big Spring Police Department Sgt. Tony Everett did not immediately return messages left by HuffPost, but said in a media release that the remains were discovered at 2:30 p.m. Tuesday by workers in a pasture near Big Spring McMahon-Wrinkle Airport. The city-owned airport is located about 100 miles south of Lubbock, Texas.

"Investigators found that the remains are human, but due to the condition of the remains, nothing else can be determined at this time," Everett said.

According to Colorado City Police Chief Roy "Tinker" Owens, it was not immediately clear whether the remains are those of a female or a male. It is also impossible to tell right now when the body was deposited in the area, the chief said.

"We have been in contact with Big Spring's police and I am aware of what they have so far," Owens told HuffPost.

"Unfortunately, they don’t know anything" yet, he said. "I have instructed my team it is in ... Big Spring's jurisdiction. If they get to a point where they feel what they have is pertinent to our case, as far as Hailey is concerned, I know they['ll] be on the horn giving us a holler, and then we'll be involved."

"But until that point, we'll just stay out of the way and wait for them to let us know what's going on," Owens said.

The crime scene was secured yesterday and this morning as an evidence recovery team from the FBI’s Dallas field office began work.

Dunn, a cheerleader, was last seen in Colorado City just after Christmas Day in 2010. Colorado City is located about 70 miles west of Abilene, Texas, and has a population of about 4,000.

Dunn's mother, Billie Dunn, 34, reported her 13-year-old daughter missing on the morning of Dec. 28, 2010. The Colorado City Middle School student had been last seen the previous afternoon. Billie Dunn's then boyfriend, Shawn Adkins, 25, told police that the teen was going to spend the night with a friend.

That friend later told police that she had not made any plans for Hailey Dunn to spend the night and was unaware that the girl was coming over. Billie Dunn later told police she had fought with her daughter before she went missing.

Colorado City Police, along with the Texas Rangers, the Mitchell County Sheriff's Office and other law enforcement departments in the region conducted several searches for Dunn but found no sign of her.

"On the third attempt to polygraph, Adkins submitted to the first stage of the polygraph, and the result of the polygraph was 'deception indicated,' meaning that Adkins failed the examination on the relevant questions of knowing the whereabouts of Hailey Dunn," it states.

Billie Dunn was initially prohibited from taking a polygraph because she was found to be under the influence of narcotics, authorities said. When investigators later conducted the tests, the results were similar to Adkins', the court documents state.

The court documents point out numerous inconsistencies in statements Adkins gave to police regarding his job and whereabouts on Dec. 27, 2010. Statements that Adkins provided police contradicted information obtained from his cell phone records, police said.

The affidavit also disclosed that several true-crime stories, which had been printed out from TruTV's online Crime Library, were found inside the home of Adkins and Dunn. The stories were about serial killers, sexual sadists and mass murderers, and included an 18-page story on George Emil Banks, a mass murderer who slaughtered his family and then went on a killing spree.

"Dunn indicated she and Adkins were both interested in the topic of the documents," the affidavit said. "Billie Dunn described the topics as a 'hobby.'"

The affidavit also stated that Adkins had allegedly remarked to a relative that hurting a teenager would be "like killing a deer."

In January 2011, Pete Kampfer, city manager of Colorado City, told The Huffington Post that Adkins was a person of interest in Hailey Dunn's disappearance.

"It's more and more of a focused investigation on criminal activity in a broader context," Kampfer said. "But I can't give you particulars about the investigation that would say why" he is in the spotlight.

Asked at the time if Hailey Dunn's mother was considered a person of interest, Kampfer said, "If you saw the affidavit, you might infer that, but I can't tell you that. I was advised to say that there are 'persons of interest,' which is plural, to include Shawn Adkins."

Billie Dunn was arrested last year for lying to police about Adkins' whereabouts. She was reportedly given a year's probation and then moved to Austin, Texas. The couple are reportedly no longer together, the Associated Press reported.

According to Owens, the location where Tuesday's remains were found is roughly one mile from the home of Adkins' mother. Owens also said Adkins remains a person of interest in the case.

"He's the only person of interest that we've had," Owens told HuffPost. "Right now he remains a person of interest. Once Big Spring finishes their deal, hopefully we’ll be able to put some more information out there." 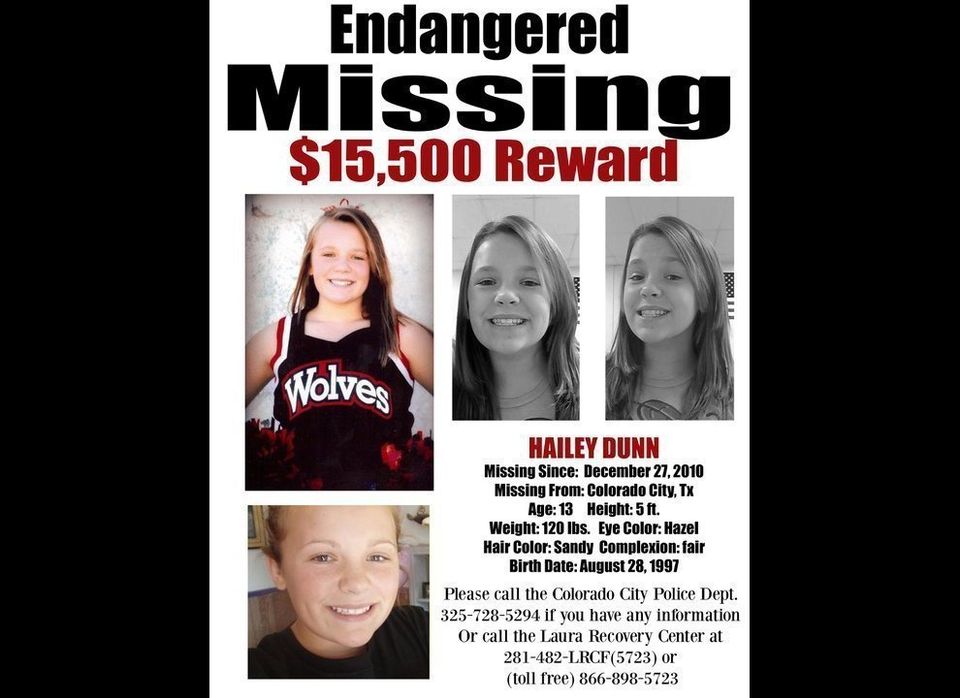 1 / 9
Hailey Dunn
Hailey Dunn, a 13-year-old student at Colorado City Middle School in Texas, was last seen on the afternoon of Dec. 27, 2010.
Handout