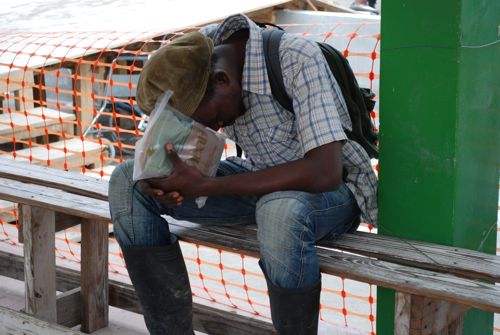 The United Nations is faced with two substantial legal petitions on behalf of cholera victims in Haiti and the Dominican Republic. The actions could not be more different in their demands, tone, jurisdictions and venues. Both petitions address the serious grievances of the residents of Hispaniola, but they differ in what constitutes the impetus for reparation. Should recompense depend solely on the law of man, or is there a higher moral imperative that must drive these demands? In short, what international body is best equipped to provide compensation for victims of cholera? Will a moral argument ultimately sway the discussion? Will the inclusion of the word "genocide" help or harm the argument?

The Faculdade de Direito de Santa Maria, Brazil (FADISMA) filed a complaint with the Commission on Human Rights of the Organization of American States (IACHR) demanding that the United Nations accept full responsibility and offer reparations for the actions of the MINUSTAH military base located in Mirebalais, Haiti. Human waste infected with cholera was dumped into the rivers and tributaries in October 2010, resulting in over 500,000 infections and at least 6,700 deaths in Haiti, in addition to 17,206 infections and 303 deaths in the Dominican Republic.

In a separate action, The Institute for Justice and Democracy (IJDH) in Haiti and its Haiti based affiliate, the Bureau des Avocats Internationaux, filed a petition on November 3 with the Office of the United Nations Secretary General in New York. The organization (s) is seeking damages on behalf of more than 5,000 Haitian cholera victims and their families. The claim asks the UN to compensate victims ($100,000 for each death and $50,000 for each person made sick) and provide the clean water infrastructure necessary to control an epidemic that continues to rage, unabated. The IJDH lawsuits are receiving major media attention and prompted demonstrations on December 9 when several thousand Haitians protested at the MINUSTAH base in St. Marc, Haiti to demand a response from the UN.

In a portent of denials to come, U.N. spokesperson Martin Nesirky told a press conference he rejected the claim of U.N. responsibility for the cholera outbreak. Note Nesirsky's comments at one minute into this Aljazeera report.

The UN has yet to respond to victims' claims and has "declined to give a time­line for a response," according to a recent IJDH press release.

Awareness of the UN's inability to police itself, from the notorious conflagration in Kivu Province in eastern DRCongo, to the totally under-reported lead poisoning of Roma people in Kosovo on UN land, is critical to establishing an understanding of the UN's malfeasance. The following video explains nine years of UNCR's outright discrimination against the Gypsy population in UN IDP camps.

The FADISMA petition also calls for a fund of at least $500,000,000 to create a public health system in Haiti.

The key here is that the UN would not be policing itself if the OAS takes up the matter. 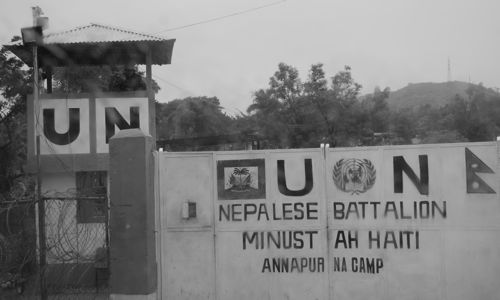 In an email interview, Cristine Koehler Zanella, Professor of International Law and International Organizations and Vice-Supervisor of Project Brazil-Haiti, suggested that by-passing the United Nations via the OAS Commission on Human Rights is a unique opportunity to effect real change and reparation based upon moral duty. Although this is FADISMA's first formal action on behalf of Haiti, it has documented human issues there since 2007.

Zanella terms the UN denial of culpability through the "convergence of circumstances" in the UN Final Report on the Cholera Epidemic in Haiti an "unacceptable point of view."

"Apart from all legal issues, our petition addresses moral responsibility. The UN cannot be immune from its responsibilities," Zanella said.

"The UN more than once refused to scrupulously investigate the origins of cholera and denied a prompt answer to the outbreak. Acting in this manner increased the potentiality for losses and provoked irreparable damages to the people contaminated, their families and, due to the proportions of the epidemic, to the whole Hispaniola Island, home of the Haitian and Dominican nations."

Part of the mandate of IACHR requests "States to adopt specific precautionary measures to avoid serious and irreparable harm to human rights in urgent cases. The Commission may also request that the Court order provisional measures in urgent cases which involve danger to persons, even where a case has not yet been submitted to the Court."

Haiti is certainly an "urgent case" and her people are experiencing "serious and irreparable harm."

The FADISMA petition says that due to the fact that the United Nations "was undoubtedly and seriously negligent, due to omission, it should therefore be blamed for "involuntary genocide." (Section 28; page 15)

The use of the "g" word, however "involuntary," might get some attention.

Still, Zanella makes a good argument for this OAS venue.

"This is really the opportunity for a region that has its own system of human rights protection to declare that such 'involuntary genocide' without the proper responsibility is not acceptable," Zanella said.

Regarding the IDJH lawsuit delivered to the UN, Zanella says that both FADISMA and IDJH are fighting for the same people, but "if you demand the recognition and declaration of international responsibility of an organization to the organization itself, the probability of success is little. The UN should not be legibus solutus (above the law)."

Regarding Zanella's hope for courage on the part of the IACHR, and in the words of Alexander Pope's Moral Epistles, "hope springs eternal" in the minds and hearts of the Haitian people.

It might be a long wait. As of this writing, there has been no response from the IACHR.

This article is also published in full at the LAPROGRESSIVE social justice magazine.