Having accompanied and translated for Haitian housing rights activist Reyneld Sanon on his recent trip to Washington, it became all too evident from many sectors: the State Department, Senate, USAID, or World Bank -- the ability to sell an image is often more important than the lived realities for Haiti's poor majority.

Time and again in DC we heard that the Martelly government is a good partner and making good progress, that Haiti is on the right track, that the relocation out of camps is going well, and that the private sector holds the (only) key to solving Haiti's housing crisis. Further, low-wage export processing jobs are hailed as the magic bullet: with a decent income people can afford to build or rent their own housing, without the need of a government handout.

There is indeed some progress, but the on-the-ground realities are more complex and sobering.

Going to what remains of the same eight camps in the longitudinal study -- my seventh visit since July 2011, first since Hurricane Isaac -- was instructive. In far-flung CAJIT, the IOM gave new tarps to reinforce the remains of a dozen families' shelter destroyed by Isaac, not to mention two and a half years' worth of beating from the harsh Caribbean climate.

Plas Lape, in the touch-and-go neighborhood of Delma 2/Sen Marten, was almost completely vacated, with only a handful of battered sheets of plastic remaining. After five meetings with the community, the NGO responsible for the relocation project resumed their activities suspended because of violence. The second of three sectors in front of City Hall in Kafou (Carrefour) was just cleared out a week ago, with the final on its way any day now.

That said, however, a couple camps appeared relatively abandoned. In Karade, for the majority of residents who weren't given a T-shelter, over half the tents were blown to the ground by Isaac. Some were rebuilt, some with donations from one or another agency. However too many were still in tatters.

The worst was HANCHO. The mayor of Delma -- only one of 2 in the whole country whom Martelly did not revoke -- marked 128 tents to be demolished to make way for a new factory. According to residents, city officials offered $5,000 to be split among the 128 families. Residents refused. No one offered even replacement tarps, for either these tents or those not in the path of progress. Worse, a week before my visit last Wednesday there was an outbreak of cholera that affected 181 people. Two children -- a four-year-old and a nine-year-old -- died. 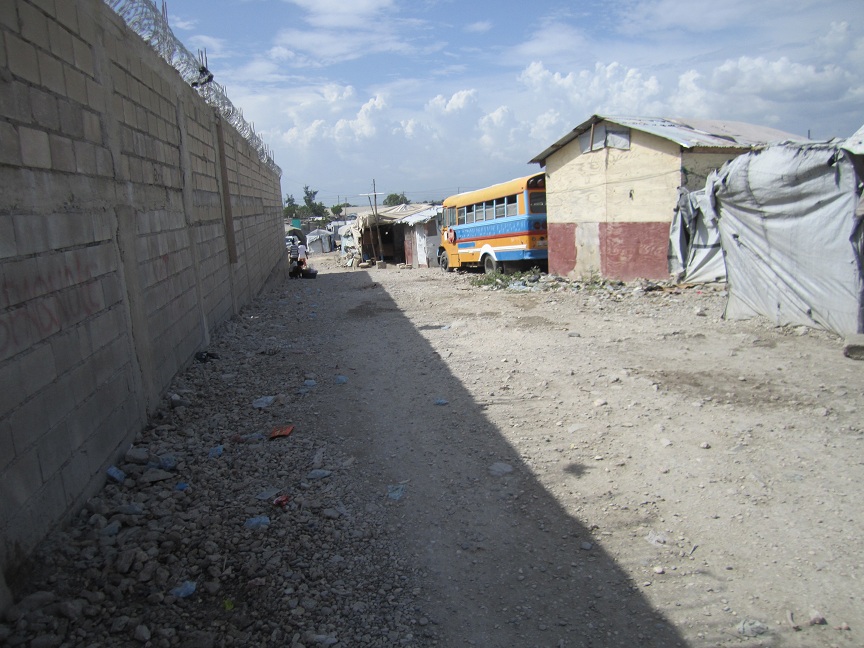 People in HANCHO are on edge, worried that they can be forcibly removed at any moment.

Riding the taptap, the public transportation, and eating at the ti resto, street restaurants, was even more instructive.

On the taptap many people are talking about the skyrocketing food costs. Staples such as rice -- 82% of which is imported -- and oil are going up as much as 50% since the beginning of August, which was already higher than in April 2008, when the country erupted in protest.

While President Martelly and his government were going to New York to attend the United Nations General Assembly protesters took to the streets, including thousands in Okap (Cap Haïtien) on Friday, September 21.

Some people are redefining the word goudougoudou -- an onomatopoeia mimicking the sound of the rumbling of the earth to refer to the earthquake -- to denote the sound of hunger pains. A recently written graffiti succinctly warns: goudougoudou demands change. 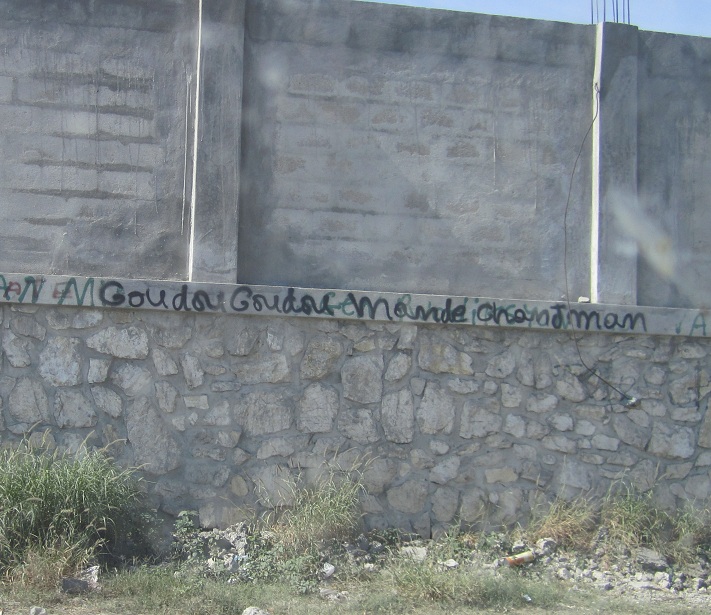 More than just linguistic innovation from a creative people, drawing parallels between rising food costs and the earthquake redefines the word "disaster," specifically reminding of its human causes. And it is a clarion call for action, a warning of an impending humanitarian crisis.

Haiti is at the vanguard of the food crisis because of its extreme dependence on foreign exports and food aid that has slowly but systematically destroyed local peasant production. But it's coming for the rest of us: this summer's record high temperatures and massive droughts are heralding rising food costs the world over. Agribusiness in the Midwest quite literally feeds the world, with corn in hundreds of processed food items.

NASA scientists measuring temperatures have concluded that this is none other than human induced global climate change, and it's going faster than many feared.

Haiti's vulnerability to shocks in global food prices was deepened by the Martelly administration's much-praised efforts at establishing the rule of law and collecting tax revenue by clamping down on the informal trade across the Dominican border. Again, this makes sense in the abstract to Washington policymakers as an attempt to wean Haiti off of humanitarian aid, which is very noticeably trickling down to a minimum.

But this solution misses Haiti's "one percent," who are granted tax shelters and regularly invest their money outside of Haiti.

The 99 percent have begun to have their say. On September 30, a protest gathered goudougoudou's cry for help, that the AP numbered at several thousand. This too has been the topic of public conversation on the taptap, in the camps, and on the streets leading up to today.

Some will likely underestimate this protest as politically motivated, organized by the Lavalas party on the 21st anniversary of the first coup against former president Aristide. But this would be a mistake given that the message has inspired thousands to march against the government despite its populist and clientelist projects like the Carnival des Fleurs and Ti Manman Cheri.

It would be useful for policymakers in Washington to get in a taptap and visit the camps to hear goudougoudou and heed its warning.

One of the most reflexive and sobering comments I translated for Sanon in Washington was that "Whatever we do in Haiti can be undermined by factors totally outside of Haiti's control." He mentioned rising oil costs and fluctuations in the global apparel market.

With all respect to one of Haiti's most effective behind-the-scenes advocates, the change goudougoudou is demanding is most definitely within our grasp:

• We can encourage self-sufficiency and national production so that Haitian farmers can feed the country.

• We can change the terms of political and economic engagement between Haiti and the rest of the world.

• We can fund efforts to stop global climate change, investing in green technology through mechanisms like a financial transaction tax.

• And in the meantime, especially since we have encouraged suppression of wages, we can encourage caps on prices on basic foodstuffs, paying Haitian farmers directly for the difference in cost.

Mark Schuller is Assistant Professor of Anthropology and NGO Leadership Development at Northern Illinois University and affiliate at the Faculté d'Ethnologie, l'Université d'État d'Haïti. Supported by the National Science Foundation and others, Schuller's research on globalization, NGOs, gender, and disasters in Haiti has been published in twenty book chapters and scholarly journal articles as well as public media. He is the author of Killing with Kindness: Haiti, International Aid, and NGOs (Rutgers, 2012) and co-editor of four volumes, including Tectonic Shifts: Haiti Since the Earthquake (Kumarian Press, 2012). He is co-director / co-producer of documentary Poto Mitan: Haitian Women, Pillars of the Global Economy (Documentary Educational Resources, 2009). Schuller is a series co-editor for Catastrophes in Context, published by Kumarian Press. He chairs the Society for Applied Anthropology's Human Rights and Social Justice Committee, serves on several boards, and is active in many solidarity efforts.