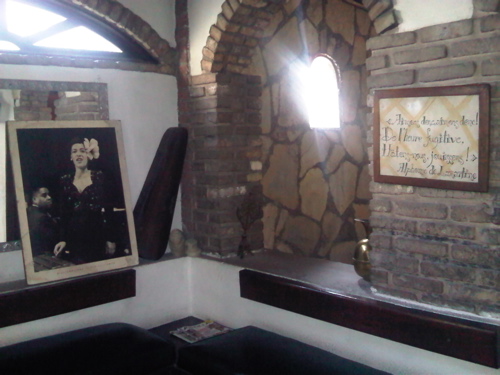 Sitting here in the pitch dark with only my laptop screen illuminating this musty, gnat infested alcove, I am a lonely writer trying to form images, thoughts, and emotions into a coherent story about this day in Haiti. My Mac is wired directly to a router in this "used to be a restaurant", but "it is now a hotel" in Petionville. The building is laid out more like a brothel, because up until two years ago it was. Billie Holiday is looking over my shoulder from an old photo on the wall, dogs are snarling outside, there is shouting on the street, and every time a truck rumbles past the building it shakes just a little. The earthquake happened eight weeks ago today at 4:53 pm. Everyone on the street was talking about it. It is a terrible anniversary of an event that lasted 34 seconds. No one was untouched by death. Right now I am wondering if it is a good idea to go back to my room on the third floor. But there is nowhere else to go unless I want to pitch a tent on the hillside.

And so I procrastinate, because to tell the truth, it is difficult to force the mind to remember the events and impressions of this day. There are a series of snapshots and video in folders labeled "Day One" and "Day Two" in Haiti. I wanted to send a story to Dick and Sharon over at the LA Progressive, but was just too darned tired last night. It still might be a good one. All the photos and video are safely tucked away in the folder labeled "Day One." The writer will certainly get to them, but "Day Two" is where it all must begin.

"Day Two" was the day we planned to drive to St. Marc's, which is a seaside town about three hours north of Port au Prince. Our goal was to find a woman, Ginette, who has a series of orthopedic problems and bone fractures resulting from injuries sustained during the earthquake. It is a good story, but it will have to wait for the telling.

Before connecting with our driver, Andre, and a strong cup of Haitian coffee, we encountered a Nicaraguan man who works with a German NGO. The meeting evolved into a discussion regarding how ineffectual American aid and NGOs have been in Haiti. The U.S. has been interested in Haiti since the days of the Panama Canal and has been its largest donor since 1973. Then from 2001-2004 the United States Chamber of Commerce forced an aid embargo upon Haiti's Jean-Bertrand Aristide's government. This was the beginning of major societal problems, since Haiti had become disproportionately dependent on the foreign aid. Along the way all of the free money was tied to U.S. meddling, military interests, interventions, coups and brutal regimes, most notably those of Papa and "Baby Doc" Duvalier. Fraud and waste contributed to the shoddy infrastructure that caused buildings to collapse like accordions eight weeks ago. "You (the U.S.) put all of your money in soldiers," the Nicaraguan man charged. I did not argue. I had just come from a conference in Miami where American mercenaries were jousting for "security" contracts in Haiti. 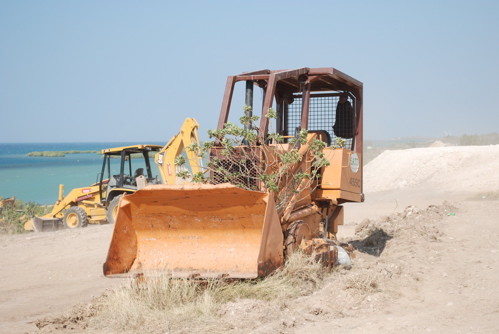 The road north to St. Marc's has a terrible historical legacy and a sacred role post-earthquake. There is a small area on the maps called Lafiteau. It is the site of mass graves filled with the bodies of victims of the Duvaliers. Now, it is also the tomb for 100,000 victims of the Port au Prince earthquake. The excavation equipment is easily seen from the highway and it is still active. More than 200,000 people lost their lives in Haiti in January. The writer wanted to see this area to give some scope, dimension and context to 100,000 people, hoping that a visual image of the geography would prompt meaningful and descriptive words.

Driving into the area, one has to look carefully to see where the ground has been disturbed, and the immediate question that comes to mind is whether or not there will be a permanent memorial of some kind to honor the dead. We found a few wooden stakes with numbers that seemed to indicate lots, and a row of white stones that marked a perimeter, but nothing that would indicate that 100,000 people were entombed.

So, the writer does what writers do and steps back, walking alone and searching for vowels and consonants that might describe what is unseen and impossible to understand. Then something happens that challenges the morality and duty of the writer. There is something on the ground that does not fit the pattern of stones and vegetation. A pelvis attached to a spinal column is lying in the open. Pieces of ribs, a wrist and a forearm are nearby. The writer knows it is human but wants it to be something else. It is familiar and something she has seen before.

The doctor with us confirms that what we see is male, a boy, really, who was 8-12 years old when he died. Is it moral to take a photo? Who was this boy? He is all of the 100,000 and yet only one. A shoe is nearby. Perhaps someone will recognize the shoe? Impossible. Yet, he had a mother. What would his mother want? Is she alive? Is she searching for him? Is she buried here? The photo is taken and the discussion flows back and forth as to whether or not this photo should ever be seen. It is sacred, as is the boy, as are the 100,000. The photo is his memorial and the writer decides to bury it forever.

We drive away in silence to continue on the quest to find the story named "Ginette," but it becomes a story for another day. The boy is with us for the rest of the morning. He is with us at lunch and with us on the return to Port au Prince. The three of us are quiet. There is no discussion, none of the usual joking to break the tension of what we have seen in St. Marc's at the hospital while we were searching for Ginette.

"Because our cultures are different and mine is telling me we need to go back and bury the boy."

"I think it is a good idea," Andre says.

The doctor who is the father of the writer's child says it might not be a good idea.

The writer reminds him that if the boy were theirs, like their daughter, they would not want her out in the open like that. It is a terrible discussion, but one that sears the boy into memory and brings death home. We are all of us flesh, and ultimately bone. 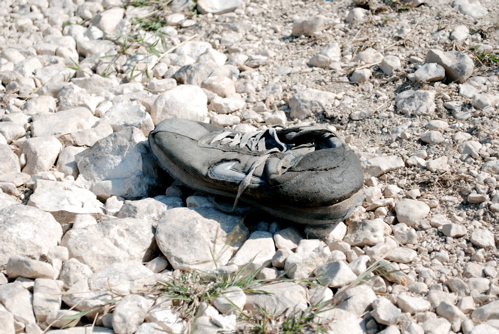 So the doctor and the Haitian man, Andre, and the writer return to the boy. The doctor puts on surgical gloves and moves the boy to a depression in the earth, while the writer and Andre carry stones to hide the bones. The bones smell of sweet marrow. There is no talking--only moving, carrying, placing, slipping, and carrying more. The doctor finds the boy's leg bones nearby and so there is more moving and more carrying and more placing of stones. It is finished. The doctor moves away quickly. Andre and the writer stand shoulder to shoulder and look at the rocks hiding the boy. Prayers are whispered. We leave his shoe lying nearby.

"Not better, but complete," the writer says.

We drive away for the second time and pass the orange bulldozer that was the boy's pallbearer. 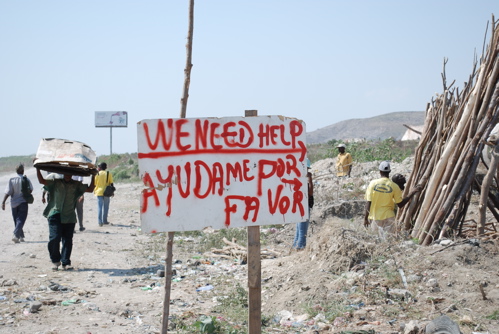 We think the pain is over and then we see a sign that reads "We Need Help." But that is another story. We will call it "Part Two of Day Two," and it is also in the folder with the photo of the boy. The earthquake has shined a terrible light on Haiti, exposing all that was buried by greed, corruption, and lust for power.

Day Three is only hours away.