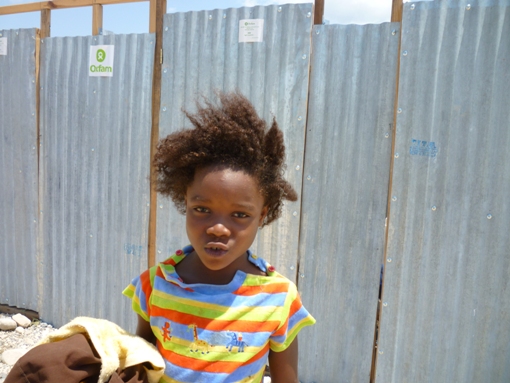 The humidity in Haiti is intense, along with the gathering clouds it signals the coming storms as the rainy season begins in earnest here. It´s really difficult to know exactly how many people have been left homeless by the 12 January earthquake- there is an official figure of 1.3 million but unofficially people think as many as two million people might be living in settlements in and around the capital Port au Prince. For these people the rain means added misery as the fear of landslides and flooding in the camps threatens to cause even greater suffering and loss of life.

A few weeks ago the government identified a temporary relocation site for those most vulnerable to the rain in the settlement camps. The site is a dusty, desert-like plain about 40 minutes drive from the capital city. Last week people began to be relocated there. The camp now houses five thousand people.

I went to the site on Friday. Rows of white tents are lined up in blocks, with people beginning to personalize what have become their new temporary homes by hanging colorful patterned materials from the tents and sticking leafed branches into the dusty gravel to add some greenery amidst the dust.

Oxfam had been given just one week to prepare the site for the new residents by equipping it with latrines, showers and drinking water. All are now operational and providing the essential services needed for the camp to function. Oxfam has also set-up a free telephone helpline for those living in the camps, through which they can report any faults with the services and provide any feedback. As we were walking through the camp a little girl, no older than four, came up behind me, put her arms around my waist and grabbed onto my hand tightly. She held on to me while we toured the camp. As we left I was told that young girls often cling on to female visitors in this way, these usually being the girls who lost their mothers in the earthquake.

As we drove back through Port au Prince there were signs throughout the streets of how economic activity has begun to spring back into life. The pavements are lined with make-shift vending stalls as people lay out any goods they have to sell so as to generate some form of income. You can find anything here, from clothes and shoes to car parts and bits of scrap metal. Most striking are the hundreds of paintings on sale by local artists, depictions of romantic coastal landscapes painted before the earthquake are exhibited alongside a growing number of fresh paintings of houses crumbling into the ground. 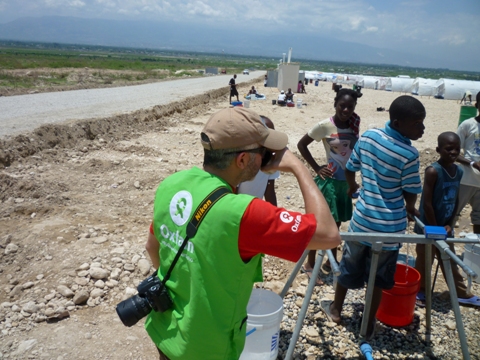 Oxfam has begun working with a group of local artists in one of the biggest camps, the Golf Course, where up to 25,000 sleep (including Hollywood film star Sean Penn who is managing the camp!). These artists work with a group of children in the camp, using art as a way of teaching them about public health and recycling issues. The children were also given a small canvas and invited to paint whatever they wanted onto it. The overwhelming majority of the pictures they painted were of houses, one of the girls, Melissa, aged 11, explained that she had painted "an earth-quake proof house" unlike the one she had lived in, which collapsed. 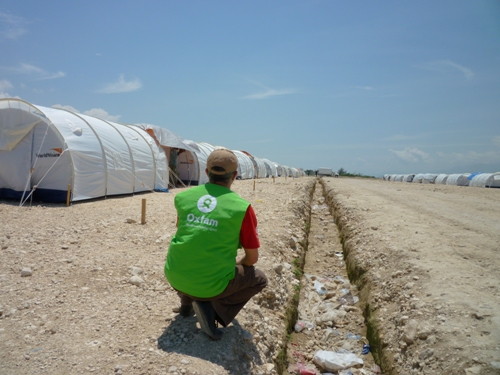