Both OXFAM and the Disaster Accountability Project released reports this week that not only enhance the already-serious criticism of the relationship between the Haitian government and NGOs, but also shed light on the inability of both sectors to offer support to the Haitian people. The reports mark the one-year anniversary of the devastating earthquake that took upwards of 250,000 lives, injured 300,000 and left 1.5 million homeless.

Ask yourselves what's wrong with these pictures? 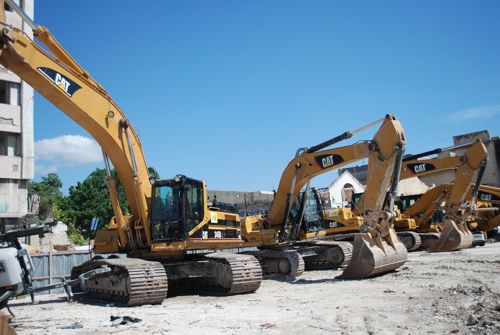 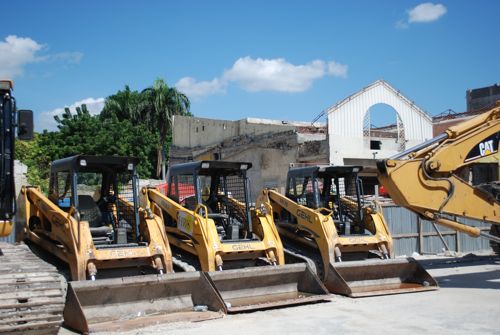 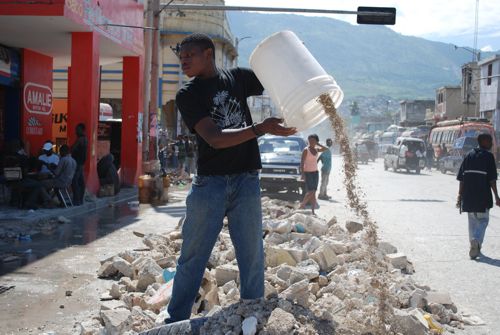 The OXFAM briefing paper reaches deep and does not flinch from indicting the Haiti Interim Recovery Commission, also led by former president Bill Clinton, as it cites a "year of indecision that has left Haiti's recovery on hold." There is no coordination between donor agencies as they jostle for control of IDP camps and no effort on the part of the Haitian government to take control of reconstruction, the OXFAM Report says.

Donors need to stop the "rampant bilateralism‟ and the often-contradictory policies and priorities that plague the IHRC. They should also coordinate much more closely among themselves in order to avoid gaps and duplication in funding. For example, money has been made available for temporary housing, but almost no funds have been allocated for rubble removal.

The caveat to the OXFAM criticism is that OXFAM itself is a powerful NGO that is looking for its own slice of the money pie. If one reads the OXFAM Progress Report (a different document), you can come away with the notion that OXFAM has single-handedly kept Haiti alive, and this is certainly not the case. Reader, be aware.

The most troubling aspect of OXFAM's presentation of the dire situation in Haiti is that OXFAM links its excellent and accurate analysis of the problems to its own "progress report." In fact, a search for "OXFAM Haiti Report" on their website will lead directly to their self-aggrandizing "progress report" before you can find their analysis of the reconstruction failures. Of course, the analysis places the blame on other NGOs.

Read the OXFAM documents simultaneously with a critical eye and see what you think.

The Disaster Accountability Project also released their "One Year Report On The Transparency of Relief Organizations Responding to the 2010 Haiti Earthquake." The report finds near "factual-blackout(s)" in relief and aid organizations' regular, detailed reporting. Donors are "giving in the dark" and "appeals to emotion" dominate factual accounting of how and where money is spent, DAP says.

The Disaster Accountability Project (DAP) is a nonpartisan, nonprofit organization dedicated to improving disaster management systems through policy research and advocacy. DAP was founded in 2007 in reaction to the response to Hurricane Katrina.

The report examined 196 organizations that solicited donations for Haiti disaster relief. It determines whether or not they produced regular factual reports, the accessibility of the reports and how the monies raised were spent.

"The fact that nearly half of the donated dollars still sit in the bank accounts of relief and aid groups does not match the urgency of their own fundraising and marketing efforts and donors' intentions, nor does it covey the urgency of the situation on the ground. This may be a disincentive for future giving by individuals and other governments."

Over 1.8 million dollars in interest was reportedly raised by just 5 of the survey respondents. Ten groups reported that they didn't know how much interest they have raised and the rest (23 groups) did not respond either way, indicating that this figure is likely higher, the report says.

OXFAM did better than most in response to the questionnaire submitted by DAP. It says that out of $97 million raised for Haiti earthquake relief, $66 million has been disbursed for Haiti relief. Five hundred staff members are currently working in the country. Regarding the interest question, OXFAM says, "current interest rates in secure, short-term investments are at or close to 0 percent. As a result, no significant income has been generated."

Another pressing question -- given the cholera epidemic, $66 million from OXFAM, the total humanitarian assistance earmarked for cholera from USAID of $40,802,413 and millions donated to other NGOs -- is: "Where is the infrastructure for clean water and sanitation?"

Water purification tablets are nothing more than a band-aid.

The answer might lie with the Haitian Grassroots organization, Ayiti Kale Je, that suggests the term NGO is a misnomer, "since many are direct subcontractors of the United States and other governments," making them Haiti's largest employer.

This video on the "cash for work" program is very revealing.

The Clinton Bush Haiti Fund promise of $3.4 million in new grants and investments, if the money enhances the Haitian private sector, offers some hope.

"While we as a global community must continue to alleviate the Haitian people's unacceptable pain, we must also take clear aim at the country's underlying problems, by offering Haitians the tools and resources they need to build a sustainable economy -- one that will help heal their country from within and put Haiti on a path to prosperity."

To date, the fund has raised over $52 million, of which more than $20 million has been committed, "the vast majority to projects that further the fund's mission of promoting economic growth and empowerment." A full list of the fund's grants and investments can be found here.

Honestly not wanting to be cynical and sincerely wanting these programs to succeed -- looking at the organizations that "benefit" from the Clinton Bush Fund -- one sees the list of usual suspects of foreign NGOs and religious organizations.

Whatever happened to UN Special Envoy Clinton's promises to the farmers who supply the sugar mill in Darbonne when he visited last June? The mill is still languishing.

Each worker in Haiti cares for an average of eight people. Since the Darbonne mill has 250 employees and currently works with over 1,000 farmers, the revitalization of the Darbonne mill translates into the participation of over 30,000 farmers, resulting in a direct positive economic impact on over 240,000 people. If successful, the sugar mill will reduce food imports by 10 percent and reduce South American sugar imports by as much as 40 percent.

Money for this project would demonstrate real progress and would go a long way toward getting the Haitian agricultural economy up and running and removing the obvious stranglehold of foreign interests.

I visited the Darbonne mill in May and can tell you that it rivals any mill currently operating in Louisiana. More than that, the pride of operation speaks volumes about what Haitians can accomplish on their own if only given the opportunity.

Support the Haitian private sector and stop the influence of dueling NGOs, spare us all of the interminable reports and help move Haiti forward. All that is lacking is real commitment on the part of the international donor community. NGOs must stop operating as corporations. Only by putting themselves out of business, by actually solving problems, can they claim success.