Haiti, 2010 -- A U.N. tank had just struck our vehicle and we were escorted back to the base. The soldiers were Chilean, which meant my Spanish wasn't so useless. They offered us food and water as they repaired the damage to our seasoned S.U.V. When we got back on the road it was easy to see why the UN drove tanks in this region. The roads were decimated by years of forgotten promises of foreign aid and of neglect from corrupt officials.

We were driving with one mission in mind, to follow the footsteps of Wade Davis, the Canadian ethnobotanist and author of The Serpent in the Rainbow.

Davis' mission differed from our own but what drove us to Haiti was similar, and that was the desire to seek the unknown. We were in search of the Haitian vodou (also written as voodoo) culture that we had only read about in Davis' The Serpent and the Rainbow. It was our second visit to this poor Caribbean nation but vodou had never crossed our path until this day. To say we were skeptical of the power of vodou was an understatement, but that would soon change when we met the voodoo priest. 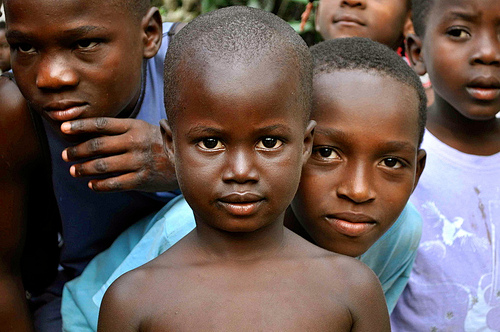 Arriving in a small village with no electricity in Northeast Haiti, we came face to face with the voodoo culture once and for all. We were greeted by 27 happy faces of smiling children, all under the age of 13. That is when we met their father, Lisma, the voodoo priest, known as a Houngan. Lisma stood only 5-foot-4 but when he spoke he sounded 7 feet tall. He was a man of passionate words and he wanted to share his world of vodou with us.

His walled-off compound sprawled across several acres of land with dozens of small concrete buildings scattered about. The centerpiece of his compound were dozens of above-ground, open tombs. They lay in an open grid across the yard, warming in the hot Haitian sun. Inverted crosses stood tall around this area and their presence only added to the uneasy feeling that had come on suddenly and strong. A helpless woman was bound by ropes to a pole in the courtyard. Lisma explained that she was tied up for her own good to heal her, but we were not convinced. 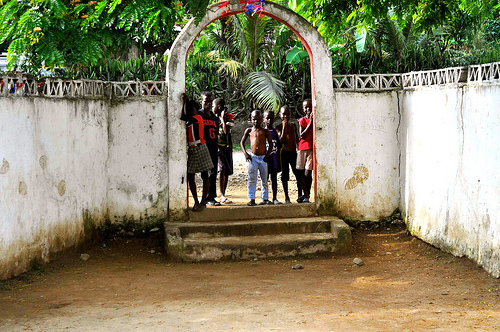 That is when I realized that I was happy I hadn't made this trip alone. My fellow adventurer, Jordan, had accompanied me. He shot me the look of a lifetime, which was of complete disbelief. We were in rural Haiti with our lifeline to the outside world in the hands of a man with open ceremonial tombs in his back yard. Nevertheless, it was the adventure we had sought when we boarded a flight to Cap-Haitien.

We followed the vodou priest into his underground lair of the unknown, slowly easing down a set of steep stairs into mysterious darkness. Just imagining the rhythmic drums of a voodoo ceremony created a sense of excitement. Once underground, the true experience began. Lisma proudly displayed the tomb used for rituals and rebirth. 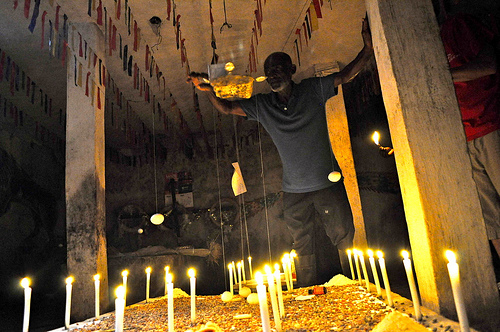 A trail of blood on the ground directed me to the altar used for animal sacrifices. The ceiling was draped with ritualistic objects and tall homemade candles in makeshift holders illuminated the room. Lisma took a seat at the ceremony table with his right-hand-man beside him.

It was then that Lisma explained that this is not the path he wanted for any of his 27 children. He explained that others used vodou with selfish and evil motives but that he had only good intentions. He confirmed what Wade Davis had said, that vodou could be used to create the modern-day zombie. This was achieved with drugs, datura (a beautiful flowering plant containing hallucinogens which cause delirium and sometimes death), and ritualistic burials. Some have questioned Davis' findings but, for me, Lisma's tale only strengthened them. That was the definition of evil in Lisma's mind and yet somehow his intentions seemed good. He offered his traditional medicine to a community that lacked clinics or Western medicine. However, the woman bound to a pole crying and wailing above us would certainly argue this if permitted to speak. In his words she was "releasing her demons" and we were in no position to argue or interfere. 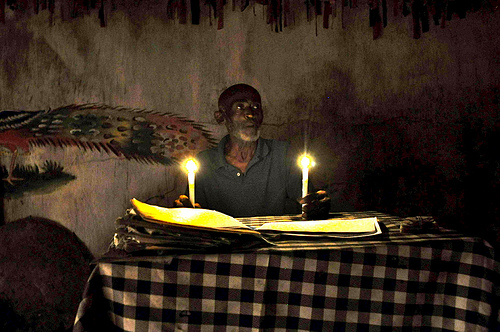 We discussed voodoo in the near-darkness before we rose some time later from the depths of Haiti's underworld to the surface. The welcome sunlight beamed life back into us and we posed for photographs with the priest. Lisma had allowed strangers into his life to expose a world completely unknown to us. It was a reminder to embrace all cultures with open arms, even when they cannot be fully understood.

Vodou is still alive in Haiti -- whether we can see it or not. It is a religion with deep roots from West Africa. The great influence of his ancestors is still strong with Lisma. I was only there to observe and learn more about him. An encounter with someone like Lisma and immersing myself in other cultures is why I continue to travel to unknown places. Although, I will never fully understand the complexities of vodou, I now have a better understanding of the people and history of Haiti.

To see more photos and follow my adventures on Triphackr.com