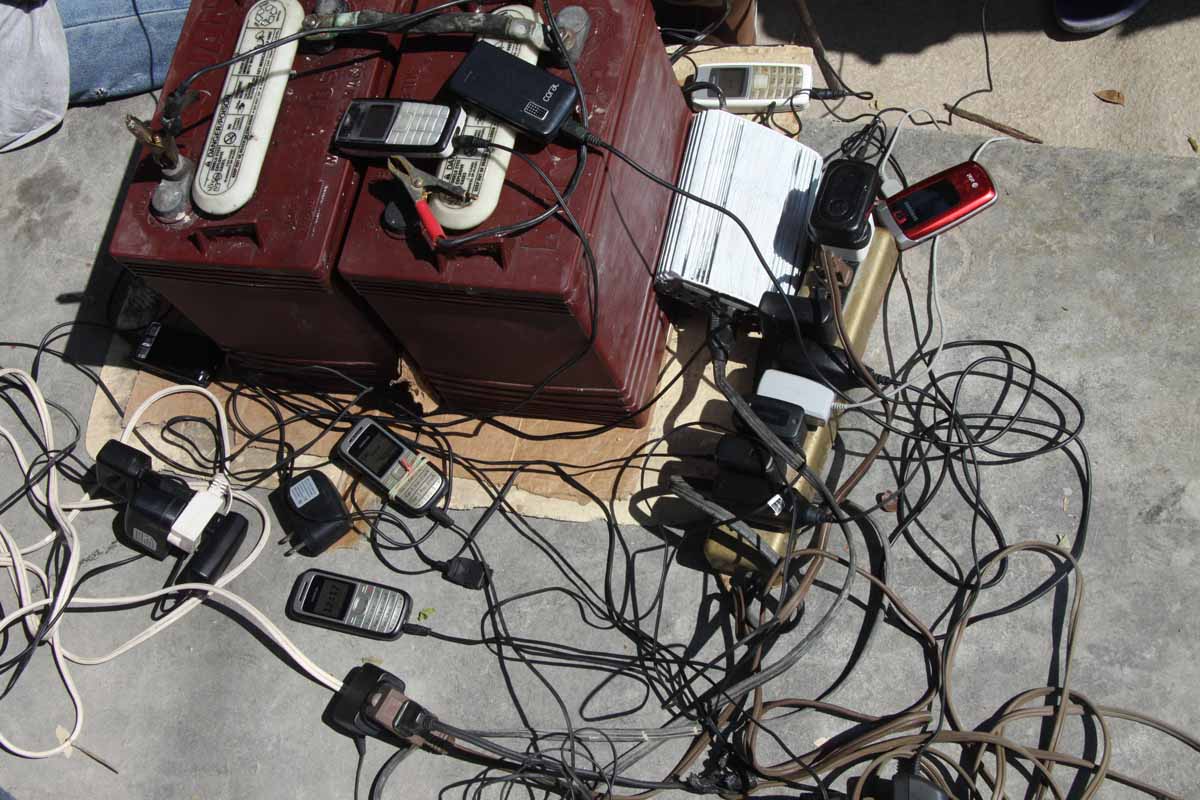 A cell phone charging business is one of many small businesses that's taken root at the Petionville Club in Port-au-Prince. Photo: Kenny Rae / Oxfam America

Oxfam America's Coco McCabe is one of several Boston-based colleagues in Haiti to help with the relief effort. Here's her latest update, dated January 27; this is part two of a two-part series.

In December, about a month before the tragedy changed everybody's lives, Janicia Dorval got a bank loan of 15,000 gourdes (about $370) to help her fund a used-clothing business. It was in full swing at the Petionville Club on Wednesday, with customers--mostly women--crowding around the shoes and purses heaped on plastic tarps next to the dusty road. There were the red patent leather slip-ons, shimmering in the sun, and green flip flops, and practical black loafers. Dorval, leaning toward the practical in flat canvas shoes and a simple hat to keep the sun off her head, was driving a hard bargain with her customers. She wouldn't budge on the price of a black bag with a zipper--35 gourdes (87 cents). But toss in a pair of sandals, and she'd let the whole catch go for 400 gourdes (about $10). Behind her stood her shelter, decked out in a tiered lace curtain, yellow with dust. Asked what she needed to help her business grow, the answer came as no surprise. Money, she said. But for Pharisien Marcaise, a 45-year-old tailor, who had sent all four of his children to Catholic school, there's something even more important for Haitians to have if they are going to move their country forward following this disaster. "Education," he said. "If the country doesn't have education, it's a dead country." Marcaise spoke with an unshakable conviction, even as the price he has now had to pay for it is higher than any parent should ever have to shoulder: When the quake struck, his son, who was studying to be a lawyer at Rubens Leconte University and was the first of Marcaise's children to achieve that academic level, was killed when the building around him collapsed. "There are people who have lost five children," he said quietly above the hum of the camp around him. "I have to keep going with my life." For now, that means keeping a small generator chugging so he can charge the batteries on the cell phones everyone here carries. Without a regular source of electricity, people depend on small vendors like Marcaise to keep them connected with their friends, their families, and the world.

Invest in Haiti's recovery by donating to Oxfam's Haiti Earthquake Response Fund. Learn more about how Oxfam is responding.