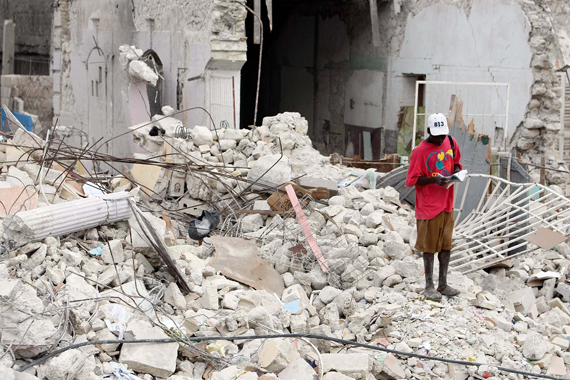 The earthquake in Haiti, aside from killing a couple of hundred thousand people in the space of a heartbeat, has put so many survivors' lives in danger that even now, two months after the cataclysm, it is difficult to think about any thing else. It's hard to imagine worrying much about artifacts and archives when so many human lives have yet to be saved.

But still, the artifacts and archives mean something to the future of the people still struggling to survive. Huge chunks of cultural heritage are at risk, along with the people to whom that heritage belongs. Art work and archives still trapped in the rubble are now being washed away by unusually heavy spring rains. In the midst of trying to shelter the people it also matters quite a lot to try to salvage the records of their history.

I know just one of these collections well: the Bibliothèque Haïtienne des Pères du Saint Esprit. In the mid 1990s I found it, after looking for it for more than ten years--of course I didn't know for most of that that I was looking for exactly that--but this library happened to contain every piece of information and document I needed to complete my series of novels about the Haitian Revolution and its leader, Toussaint Louverture. Getting into it was like entering the presence of the Holy Grail for me; in fact I had to sit down a few minutes so I wouldn't faint.

At the time that I got my first glimpse of it, the Haitian Library of the Fathers of the Holy Spirit had recently been unearthed from the hiding place it had occupied during the Duvalier regime. The Spiritain fathers were prominent in the liberation theology movement, whose democratic activism made them enemies of the dictatorial state. Duvalier expelled them from Haiti in the sixties; the library was boxed, and effectively buried.

After the fall of the Duvalier regime in 1986 the Spiritains returned to Haiti. Their compound in central Port au Prince--Le Petit Séminaire Collège Saint Martial--contains a church, a seminary, an excellent twelve-year school, and the station Radio Soleil, a beacon of the democracy movement which brought Aristide to the Presidency of Haiti in the 1990 election. By the mid 1990s, the then librarian, Père Antoine Adrien (himself a redoubtable force in the democracy movement of those days) had judged the Saint Martial space secure enough to bring the collection back there.

As Père Adrien explained it to me back then, the collection (begun in 1873, and the oldest such archive in Haiti) is organized in three concentric circles of interest. At the center is the history of the Haitian Revolution, at the close of the 18th century. The next circle is the larger history of the Caribbean during the same period. The outer circle is the whole history of slave trade in its triangular pattern between Europe, Africa, and the New World. The collection thus contains the original germ not only of the Haitian story but the whole story of the Western Hemisphere--ours as much as theirs.

The Saint Martial compound was hit hard by the earthquake, though not completely destroyed. One of the school buildings fell to the ground. The church has been severely damaged. The building housing the library was structurally compromised, though it didn't collapse; in the weeks following the earthquake the current librarian, Patrick Tardieu, managed to get the collection boxed and removed.

So now the collection is in the same situation it was during the Duvalier days, when the dictatorship might well have destroyed it--because of its inspiration to freedom. Books don't do well in boxes in Haiti, whose climate is extremely hard on paper. I once received by mail an old book I had searched for long time. Though carefully sealed in a plastic wrapper, the paper was shot through with worm holes. When I took the plastic off, I found that the pages were uncut. No one had read this book, so far, but the worms.

The Bibliothèque Haïtienne, like the other collections which are also in danger, won't directly feed or clothe or shelter Haitian people. But it contains a spark of the spirit they need to keep going. More than an archive of their past, it holds the promise of their future.
The John Carter Brown Library in Providence, Rhode Island, has established a fund, "Saving Haiti's Libraries," for the benefit of this and other jeopardized collections. To make a donation, visit http://www.brown.edu/Facilities/John_Carter_Brown_Library/haiti/index.html.

Author, The Color of Night