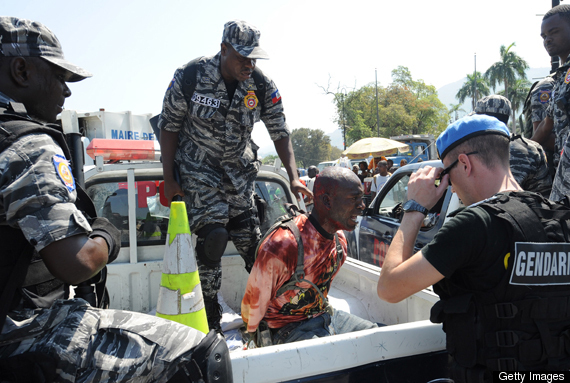 In the aftermath of the earthquake, Haiti's largest prison was victim to what South Africa's Eyewitness News called, "the largest jailbreak in history." 4000 people escaped from prison, free to roam a country in crisis.

Prison guards and UN peacekeepers stationed at the prison both fled after the earthquake.

"You know, I don't want to anticipate the result of the investigation, but to me it's very suspicious," national Police Chief Mario Andersol told the Miami Herald.

A member of Haiti's parliament, Senator Jean Hector Anacasis, has reacted to the prison break as though collusion were a foregone conclusion, pointing to a longstanding pattern of 'escapes' orchestrated by drug traffickers with help from the inside: "It's nasty to liberate psychopaths who were imprisoned at the cost of great sacrifice in terms of time, of money, and of the lives of police officers."

If the violence unleashed by the release of Haiti's most-wanted does not cripple the relief effort, the corruption that seems to have made it possible very well might.

One of the escaped, laying low in Cite Soleil, told a local reporter "We were set free. The authorities must assume responsibility and admit that they had the prison gates opened."

An unreliable narrator, perhaps, but the prison warden, Olmaille Bien-Aime, has been missing since one week after the earthquake.