The infamous selfie is becoming a fixture in modern life, and we need look no further than this year's hajj to see why.

Millions of Muslim pilgrims will make the journey to Mecca for hajj between October 1-6 this year. They will perform a series of complex rituals that include circling the sacred Kaaba and walking seven times between the hills of Safa and Marwa -- and many will whip out their phones now and then to snap a photo.

Mecca visitors have plenty of other things to worry about, from gentrification to terror threats, but for some the selfie is another dreaded intrusion on the holy site. Arab News recently wrote about the pushback among scholars and other pilgrims who call the practice "touristy behavior" and "humble-bragging."

Scholar Sheikh Assim Al-Hakeem, based in Jeddah, argued that selfies go against the spirit of Hajj:

“Photography without a legitimate reason is an issue of dispute among scholars. However, despite this difference of opinion, there shouldn’t be any dispute when it comes to the real meaning of Hajj and the essence behind it. It is based on sincerity and following the sunnah. The Prophet (peace be upon him) when he went for Hajj, he said: 'O Allah, I ask of you a pilgrimage that contains no boasting or showing off.' Taking such selfies and videos defy the wish of our Prophet.”

Al-Hakeen may have a point. Research psychologist Peggy Drexler argued in a 2013 Psychology Today article that selfies may signal narcissism.

"There’s a sense that selfie subjects feel as though they’re starring in their own reality shows, with an inflated sense of self," Drexler wrote.

A more recent Psychology Today article from Pamela Rutledge, the Director of the Media Psychology Research Center at Fielding Graduate University, takes a different approach. Selfies, she said, are casual and unmediated, allowing people far and wide to feel that they are a part of something even if they aren't there.

"By and large, selfies are a product of the exuberance of the moment and allow communication directly from the individual on the scene," Rutledge wrote.

Beyond the high-profile selfies, we also get to vicariously experience the World Cup, concerts, and other high-profile gatherings through the visual exuberance of millions of "regular people" from around the world, rather than having our window onto the event curated by the aesthetics and storytelling of professional photographers. Granted, the pros' shots are usually higher quality, but selfies are about "being there"—with another person. How many times have you wished you could share a moment with someone far away? Now you can, in a heartbeat.

Mecca is off-limits for non-Muslims, so for them and any Muslims unable to make the trip for economic or health reasons, photographs offer a glimpse inside an otherwise unknown territory. There is even a 3D app available for those interested in going on a "virtual hajj."

Another argument from selfie-critics is that incessant photo-snapping interrupts the moment and can cause undue commotion -- especially with two million people trying to make their way through the hajj rites.

"I was trying to pray Jumma in Masjid Al-Haram but a few people kept coming in front of me to film the Khutba (sermon) with their cameras," a pilgrim told Arab News. "What happens to one’s khushoo (serenity in prayer) in such a situation is anyone’s guess."

Mecca has changed dramatically over the last century, and perhaps the selfie is just one more 21st century embellishment to the ancient site, for better or worse.

Take a look at a sampling of hajj selfies below and let us know what you think: inappropriate or harmless fun?

Infamous Hajj Selfie Is One More Thing Transforming Mecca, And Not Everyone Is Happy About It
Mecca's Transformation Over The Decades 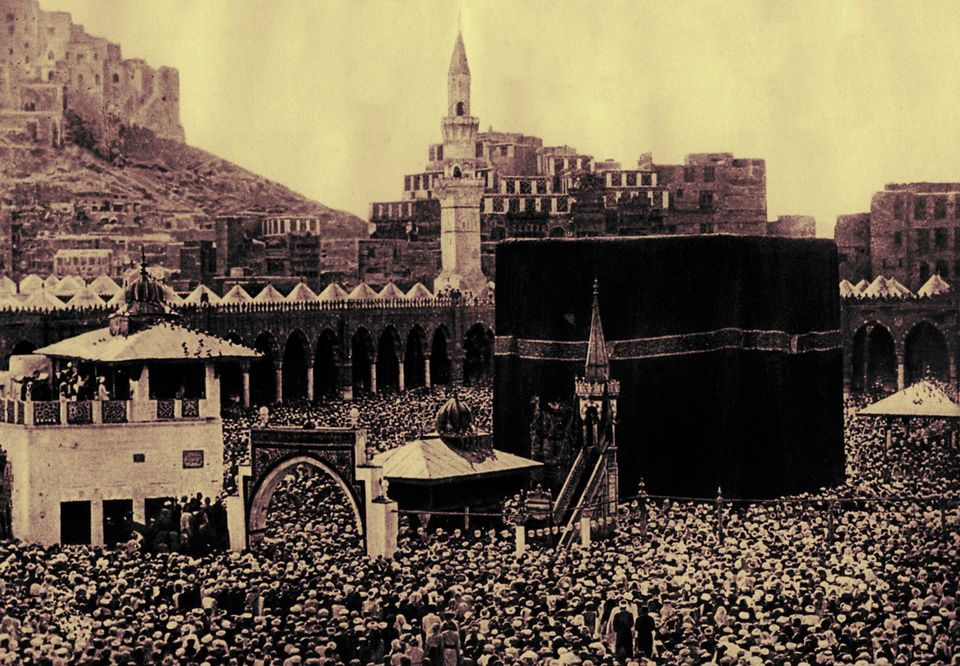