The idea that people might be staring at you in public and judging you on your weight is something most of us fear. For photographer Haley Morris-Cafiero, that negative attention has often been a reality -- and she has transformed that experience into art that puts the spotlight on those doing the staring.

"I have always had a hard time controlling my weight... [it] has determined my place in society and I have often felt left out and awkward," Morris-Cafiero writes on her professional website. The way that people react to her body in public is the subject of her photographic series "Wait Watchers," in which the artist captures herself and the inquisitive -- and sometimes disgusted -- expressions of passers-by as they see her.

The project is an offshoot of work Morris-Cafiero started in 2010. When reviewing pictures she took of herself in Times Square, she noticed a man in the background of on of the photographs staring at her with an expression of disgust. Five frames later, she noticed another male passerby staring at her. The artist told The Huffington Post, "I'd heard people comment about me, but I never thought I could capture it on film."

She set out to document how she was received in public spaces, both as an overweight woman and as a photographic subject. She set up a visible camera, usually on a tripod, and estimates that she has taken thousands of pictures of herself engaging in mundane acts such as reading, sketching, talking on the phone and eating in public. "Eating solicits a response a lot more often than if I'm standing around waiting for somebody," she observed.

Morris-Cafiero, who is currently the head of the Photography Department at Memphis College of Art, said she has mixed feelings about the basis of strangers' reactions. "I think some people are just reacting to the way I look. And I do think some people are reacting to me being photographed... I don't presume that they all think I'm fat. But at the same time, for that one little fraction of a second, there's a physical reaction to me doing what I'm doing."

Fat-shaming is common in the U.S., even though more adult Americans are overweight than are not. According to the CDC, two-thirds of American adults are overweight or obese. Yet overweight and obese individuals are subject to discrimination from employers, healthcare professionals and potential romantic partners. Organizations such as the National Association to Advance Fat Acceptance (NAAFA) aim to reduce fat stigma and promote acceptance of healthy bodies at any size, but the near absence of overweight bodies in media and entertainment make that acceptance slow to catch on.

Morris-Cafiero's series, with seeks to change public attitudes about weigh and explore the roles of fat bodies in public, comes on the heels of work by other contemporary artists examining attitudes about female body size and appearance. Leonard Nimoy's series of photos of plus-sized women, "The Full Body Project" received attention from major media outlets like NPR and the New York Times, and Substantia Jones' ongoing Adipositivity project aims to "widen definitions of physical beauty. Literally."

Morris-Cafiero said her photos have been well-received so far. "The only criticism that I've gotten is that I'm being arrogant to think that people think anything about me," she said. "I don't assume anything... I consider this a social experiment." She added that her work is as much about capturing public reactions, especially negative ones, as they are about putting her body into a public space. "I'm turning the camera on them," Morris-Cafiero said.

And, perhaps, some of the shame as well. 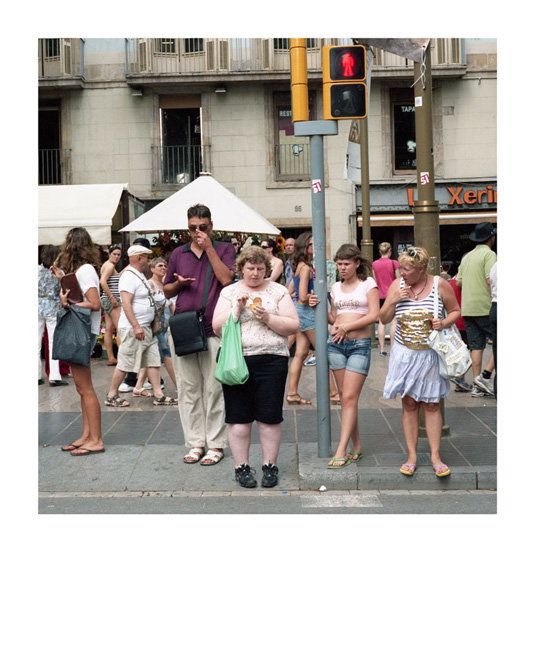