A little less than four years ago I stepped onto a small stage at West Hollywood's Here Lounge to compete in the amateur drag contest. For my "Single Ladies" performance, I was wearing a borrowed wig and a one-piece swimsuit from Ross onto which I had hot glued rhinestones the day before. My friends had come up with a name, Shangela Laquifa Wadley, and I didn't care much about how foolish the name sounded, because I was only going to be doing drag this one time... or so I thought.

Now fast-forward to next Thursday, Nov. 29, when the name D.J. "Shangela" Pierce will appear in the credits for one of the highest-rated television series airing right now: Glee. Say what?!

To write that I'm excited about guest starring on an episode of Glee is an understatement. I light up brighter than a holiday tree at Pier One Imports every time I even think about it. Each moment of taping this episode was awesome, from the first day of rehearsal with Glee choreographer and co-producer Zach Woodlee (who is also a fellow Texan) to cracking jokes onset with Lea Michelle (Rachel), Chris Colfer (Kurt) and Dean Geyer (Brody) about the green beans "that Granny used to make." And of course I'll never forget dancing next to Sarah Jessica Parker, who did an entire four-hour rehearsal in the cutest Manolo Blahnik pumps! There were moments when even I had to say to myself, "Bitch, is this really happening right now?!" And then I'd say to myself, "Snap out of it and go ask SJP to be in your music video for 'Werqin' Girl'!" (which, by the way, drops Dec. 1).

In this episode I appear as an acquaintance of Parker's character who attends a Thanksgiving dinner in the New York apartment of Kurt and Rachel. Think turkey. Think drag queens. Then think full-on, 20-plus-person, sick'ning dance sequence to the Scissor Sisters hit "Let's Have a Kiki." All I can say is, "Y'all aren't ready!" 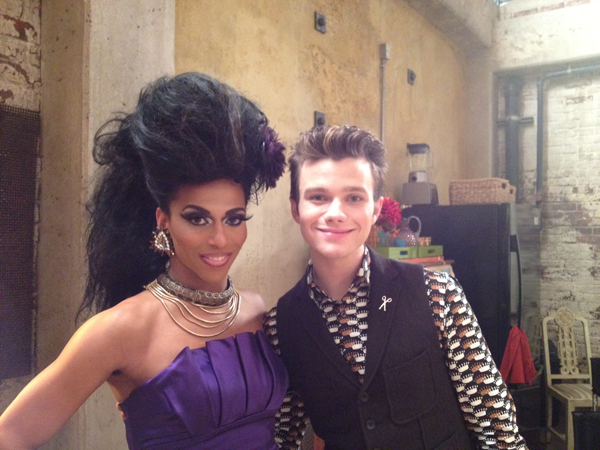 It's true that I always wanted to be a television actor, and this year has definitely brought some amazing opportunities for me. I hope that anyone who has followed my journey over the last four years will have been inspired to follow his or her dreams. Even when misunderstood or "hated on," I've kept my focus on positive experiences, worked hard, shared a smile with others and never given up. That's how I got myself from that small stage at the Here Lounge to the set of Glee next Thursday night... and it's how I will continue on in life. Can I get a "halleloo"?

Interestingly, my birthday falls on Nov. 22, which just happens to be exactly one week before the Glee episode airs. In addition to the 12-piece spicy box of Popeyes that I indulge in every year, this will be quite the added gift. Stay inspired, peeps, and never give up!

Glee is currently in its fourth season of production and airs Thursdays on FOX at 9/8c.