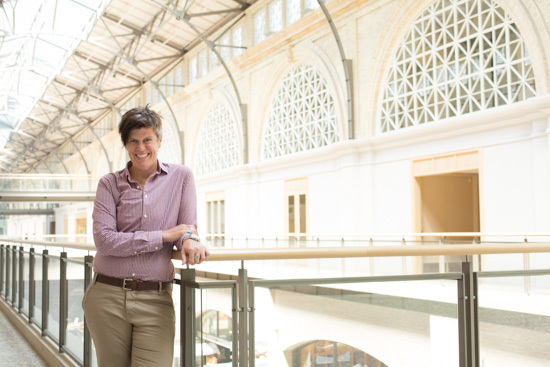 Oscar Wilde once wrote, "Behind every exquisite thing that existed, there was something tragic." Nowhere is there a better illustration of that veracity than the magnificent Ferry Building on San Francisco's waterfront.

In 1989, the Loma Prieta earthquake damaged the elevated highway and cut the waterfront off from the the rest of the city. After the old highway was torn down, the waterfront was faithfully revitalized and the Ferry Building--which originally opened in 1898 but had been closed for decades--was renovated and reopened in 2003 as the home of the now-famous Ferry Plaza Farmers Market. Organizing the market from its Ferry Building headquarters is CUESA, the Center for Urban Education about Sustainable Agriculture. They are the governing body whose vision is to educate and feed its shoppers. 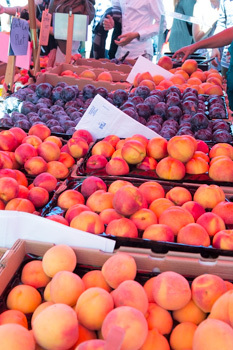 Now this quintessentially American west coast city has everything anyone with a penchant for progressive foods could ever hope for. The Ferry Plaza Farmers Market showcases precisely what San Francisco food is all about: sustainable, fresh, local, distinct, and delicious. It's open year-round on Tuesdays, Thursdays, and Saturdays. You'll find the best produce available anywhere and CUESA's free or low-cost educational programs help urban dwellers learn about their food, where it comes from, and how to grow, select, and even prepare it.

We caught up with Executive Director of CUESA, Marcy Coburn, in her gorgeous office. Through grand arched windows, she has a view of Market Street and Sue Bierman Park and we wonder how she gets anything done. After just three minutes, though, we understand. Marcy speaks about food as persuasively as a preacher engaging parishioners on Sunday.

"Our mission at CUESA is to cultivate a healthy food system and we do that through operation of farmers markets," says Marcy. "But it's so much more than that. A healthy food system is what connects everyone and everything to food people eat. It's about access, distribution, transportation, who's growing the food, and the techniques and processes that go into growing that food."

CUESA has published the Four Pillars of a Healthy Food System that speaks to current conversations about food, where the food came from, and why that matters. "A lot of work goes into growing food. When you farm, you're nurturing a life...a tiny seed. It eventually becomes a product that has to be picked, handled, washed, packaged, shipped, and displayed," Marcy explains. "Then it's sold, and when you or I buy it, it goes through stages until we finally prepare it and serve it to friends or family. It's a long, long process. There's so much care at every point, so many ways a farmer has to engage with food. It's amazing that anyone grows anything. It's amazing that anyone eats--that we're able to nourish ourselves!" 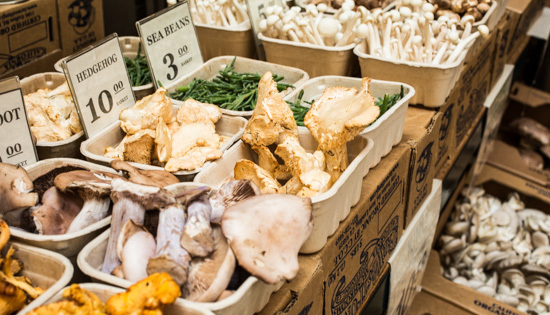 A lot of people visit the Ferry Plaza Farmers Market simply because it's a cool experience, but how many, like us, come because they crave sustainability?

"It runs the whole gamut," Marcy tells us. "Some people come buy tomatoes, grab lunch, go home, and never have an awakening or transformation--at least not that they know of. But they are being transformed. We are all connected, and coming to the farmers market connects you with fellow people in the food experience." 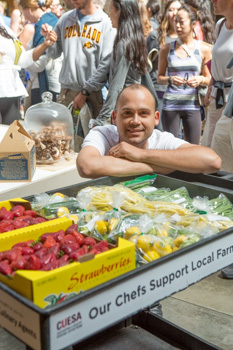 As sustainability champions, we come to the Ferry Plaza Farmers Market to buy food that's fresher, healthier, tastier, and easier on the planet. We also love to talk about food, something else Marcy does exceptionally well: "The most important, the most basic thing we do here is watch people interacting. The farmer who grew that food does an exchange with a person who's going to eat that food. You can almost hear the conversation: I grew that food, you're going to eat it, and we're going to talk about why that matters. It's the most intimate point of contact you can have with your food!"

Great chefs tell us that if you don't start with amazing products you don't have amazing dishes. What chef wouldn't shop at the famed Ferry Plaza Farmers Market, we ask?

"A lot of these farmers couldn't make it if they were just here to sell a peach or two to tourists," Marcy answers. "Up to 55% of our farmer sales are thanks to chefs, and they are doing much more than shopping here, they're partnering with CUESA in many, many ways. Every October we hold our biggest event, Sunday Supper: A Farm to City Feast & Fundraising Gala, and every year 40 different chefs create a four-course menu for 400 guests. They donate their time, their equipment, and their staff. Chefs also participate on our committees, and they even market to their own customer bases for CUESA events. They're invaluable." 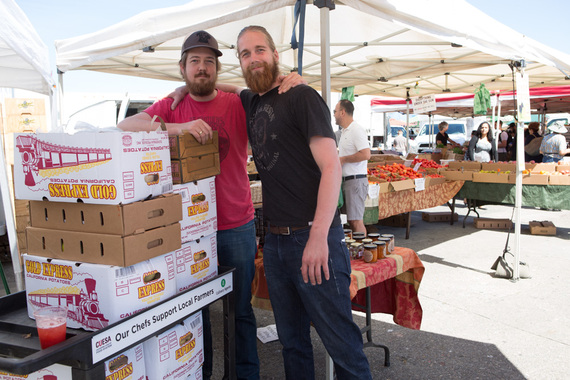 To prove Marcy's point we found Chef Manny Torres Giminez (above right) of Coco Frio and Chefs Joshua and Zachary Seibert of Mission Beach Café doing their shopping at the Farmers Market the following Saturday morning. The chefs told us that visiting the market to select the best produce in the city is the highlight of their week. Chef Peter Rizos of San Francisco Cheesecake Company even brought out samples of the candy cap mushroom cheesecake he made from mushrooms he purchased from Far West Fungi. Yes, mushrooms so sweet they're used for desserts! The candy cap cheesecake honestly melted in our mouths. 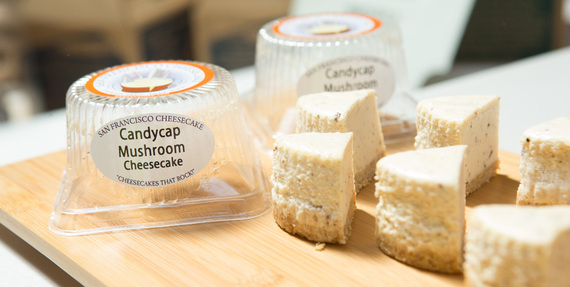 So we had to ask why every chef in San Francisco isn't shopping at the Ferry Plaza Farmers Market?

"Ferry Plaza is known as 'the chef market' and we have the best variety and product, but parking is definitely an issue. After countless meetings to fight for them, I convinced the Port of San Francisco to give us temporary parking permits for the Farmers Market and we offer them exclusively to chefs. They get valet parking and a wheeled CUESA cart that they can use around the market to get in and out of with all of their goods." 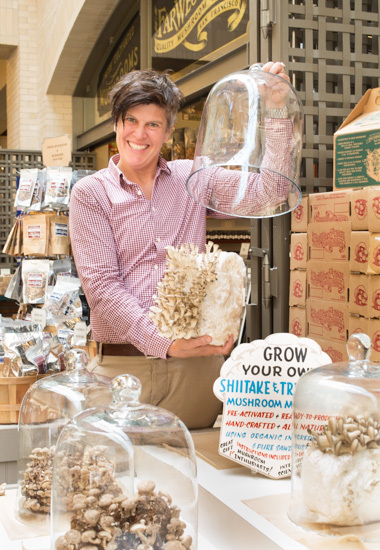 We're longtime fans of the Ferry Plaza Farmers Market so we're often surprised to learn that many locals have never been to the Farmers Market. What is CUESA doing to communicate or market to the public?

"It starts with what many locals consider the bane of the city, international tourists," says Marcy. "We have a great opportunity to educate people here and people come from around the world. I just gave a tour to the Mayor of Kobe, Japan, and his entourage. They want to duplicate what we're doing here and we're always happy to give a tour and host outsiders."

We're seeing CUESA in the news a lot more these days. Why is that?

"CUESA has done some amazing things over the years, but we've been reluctant to take credit," Marcy says. "The organization was just framed to work 'behind the scenes.' I've been here a year and I think we simply need to talk more about what we're doing. We have 400 volunteers, 150 sellers, 400 chefs, and more who should assume credit for our good work. I'm all about broadcasting what we're doing. We're experts. So if you're trying to replicate this in your hometown we have an amazing model. If you simply want to come buy a few tomatoes, we want you to visit us, too!" 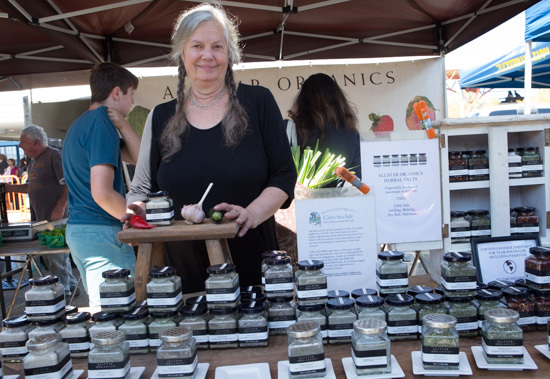 One farmer on the "not to be missed" list at the Ferry Building is Janet Brown and her partner, Marty Jacobsen, of AllStar Organics. A fixture here, they're offer unique and delicious organic vegetables including a mix of heirloom tomatoes: Red and Yellow Brandywine, Mortgage Lifter, Cherokee Purple, and Big Rainbow. They also sell a full line of fabulous organic salts.

Do you crave sustainability? We invite you to engage in a deeper way with your food and with farmers. Ask where your food comes from. Demand more local food at grocers and restaurants. Visit the Ferry Plaza Farmers Market, or a farmers market near you, and learn about upcoming food/farmer/chef events and participate in at least one this year. The tragedy of our food system is systemization and industrialization, but we believe reconnecting with our food can change the world. Or as Marcy, the evangelist for the Church of Food, puts it, "Your relationship with food can be transformative."

Chefs: If you're new to the CUESA program send an email to operations manager, Lulu Meyer at lulu@cuesa.org and she'll get you a pass and assist you with streamlining your shopping process.