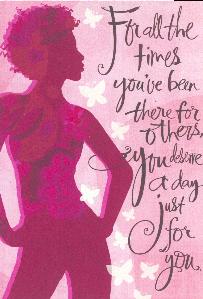 I couldn't help but notice that Hallmark has issued a Father's Day card for black women. I'll admit to being taken aback by the sheer thoughtlessness of this endeavor, while studying the image of the strong and defiant black woman standing on the cover of the card, taking pride in the fact that she's holding it down while those "trifling ass negroes" are out there doing only God-knows-what. From what's been reported, these "Happy Father's Day Mom" cards are used mostly for the Mahogany line at Hallmark, which focuses on the African American community -- it appears that someone has been doing their demographic research.

The card made me think about my daughters, who don't need yet another image, song or slogan that makes them look forward to becoming somebody's baby's mama, without giving a second thought to doing the hard work necessary to create a stable and sustainable family structure (we also had long conversations when Fantasia's Baby Mama theme song came out a few years ago). Anyone who's spent time in urban communities realizes that there is a powerful trend of young people having children without thinking about the fact that two parents should be raising a child together. One girl I mentor in "the hood," who had several aunts working as single moms, actually asked me, "Do you know anybody who's married? I don't know anybody who gets married."

My biological father ran for the hills when I was a baby, but my mother never gloated over the fact that he was gone or acted as if he was irrelevant. During World War II, when white men were off fighting for their country, Hallmark didn't create a Father's Day card for white women. While millions of single black mothers do a wonderful job of raising their children, the last thing we need to do is institutionalize and immortalize the crisis of the black family in America.

I'm not sure who runs the Racial Decision-Making Department at Hallmark, but this is certainly a decision that should be reconsidered. Black women are already painted by America to be aggressive, hyper-masculine creatures who are unable to create productive families. Black men are portrayed as shiftless, lazy buffoons who sprint in the other direction at any sign of accountability. While both of these stereotypes hold true in too many contexts, we must exalt those who seek out a higher purpose and keep our families together.

Memo to Hallmark: Father's Day is a holiday for fathers. A father is defined by Webster's Dictionary to be "A man who has begotten a child." It is not defined as "The woman who raises the child when there is no man around." As a father myself, I am offended that Hallmark would simply write black dads out of the equation and hand the family penis over to the mother. Sure, the mother's hard work should be celebrated, but perhaps this company can still engage in its standard corporate opportunism by creating a separate holiday that focuses on single mothers of all racial backgrounds, and not just hijack a holiday that is meant for men who care about their kids -- that would be like me turning Hanukkah into Christmas Part II because I never had the chance to be Jewish.

The problem of fatherlessness in black America is not simply some cultural phenomenon that black people suddenly and inexplicably decided to embrace. Half a century ago, most fathers were present in the homes of their children. The dramatic increase in fatherless homes is directly related to the joint crises of mass incarceration and unemployment that have hit the black community like Hurricane Katrina, making it difficult for many men to provide for their families -- these conditions bred a set of cultural norms in which we were all somewhat complicit in accepting the status quo, rather than fighting the systemic obstacles that led to the demise of our community. Individual behavior serves to perpetuate the crisis, but structural factors created conditions that fueled unhealthy coping mechanisms -- the same way that Michael Vick's puppies might have chosen to kill one another, but they'd have never learned to kill had they not been locked in cages, starved and forced to fight one another for survival.

Economic struggles are no excuse for not being there for your children (as I expressed in my Father's Day article), but we must also realize that many young men today are being raised without a father to show them the responsibilities of being a dad, and many young girls are being raised to believe that you can and should do everything on your own without dealing with a man or a relationship. So, while personal irresponsibility certainly plays a role in the lack of fathers in the home, we can also point to broader institutional constructs such as the prison industrial complex (and even Hallmark's perceived celebration of the missing black father) as prominent factors in this sad state of affairs.

While the loyalties of black mothers to their children is nothing short of heroic, we must get away from buying into the notion that black men are subhuman animals who love their children less than white men do. Millions of black dads like myself, as well as the mothers of our children, are offended by the idea of writing the father out of the equation altogether, as if we aren't meant to exist. Also, there are fathers who don't have the opportunity to be in the home with their children who don't enjoy having their role minimized by having to give away equity in a special day that was designed for them.

Hallmark's decision to create a Father's Day card for black women engages in the act of celebrating a dysfunction, increasing the likelihood that the dysfunction eventually becomes as acceptable as the normal state of affairs. Suddenly, in the minds of some, it's cooler to be a single black mom than to be a married mother raising her children with a partner - I want my girls to plan their families with a higher purpose in mind, and Hallmark isn't helping with that endeavor.

Dr. Boyce Watkins is a Professor at Syracuse University and founder of the Your Black World Coalition. To have Dr. Boyce commentary delivered to your email, please click here.