As Halloween approaches, many of us will be purchasing more than our usual share of chocolate. And while most of us probably make our purchasing decisions based on cost or preference, there is another factor to consider: most mainstream American chocolate companies make chocolate from cocoa sourced in the Ivory Coast, and there is an overwhelming amount of research that indicates that children are working in forced-labor conditions in this region.

The picture below shows a young child gathering pods to harvest cocoa beans. There are hundreds of thousands of children in West Africa who do this back-breaking work. Young children. Children who should be attending school and having a childhood. And they are working for most of the mainstream chocolate providers in the USA. A report from the International Institute of Tropical Agriculture about cocoa farms in the Ivory Coast estimated that there were more than 200,000 children working on cocoa farms in hazardous conditions. Some of them have been taken from their families, or sold as servants. CNN reports that chocolate companies claim it is too difficult to track because the farms are so remote. "They say it makes it extremely hard to end child labor and trafficking. They say it makes it hard to find trafficking victims." And yet, when CNN sent four journalists out to investigate, they found trafficked children on their first day on the field. 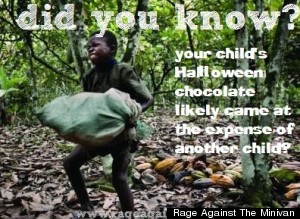 The connection between major candy bar manufacturers and child labor is one of the world's best kept secrets. It has been going on for years, but most Americans have no idea. The U.S. Customs Service was sued by the International Labor Rights Fund for failing to enforce laws prohibiting the import of products made with child labor, and the chocolate industry has failed to meet numerous deadlines set by Congress for regulating. CNN reports:

The Harkin-Engel Protocol, a cocoa industry-wide agreement signed in 2001, was written to put an end to forced child labor in chocolate by 2005. That deadline had to be extended to 2008, and again to 2010. It's now been more than 10 years.

Earlier this year, Nestle announced they were submitting to a study by the Fair Labor Association to determine if child labor actually did exist in their supply chain. The findings of the Fair Labor Association reveal that there is indeed child labor in the Nestle supply chain. Reuters reported: "Child labour is still widespread on Ivory Coast cocoa farms supplying Nestle, an investigation by a workers' rights group has found, prompting the world's biggest food group to pledge a redoubling of efforts to stamp out the practice." Nestle has made several public statements about their commitment to stopping this and their strategies include producing an illustrated guide to the supplier code and educating their farmers not to employ children. Still, Nestle is not willing to submit to fair trade certification, which would be the best way to ensure compliance. Global Exchange has named Nestle as one of the top 14 companies behind the worst labor abuses.

A few other major chocolate companies have done a great job in the last year with some PR campaigns... either offering an obscure fair-trade chocolate bar or pledging to make changes by a certain deadline. Both Mars and Hershey's have pledged to "certify" their cocoa is sourced ethically by 2020. However, as noted above, most major chocolate producers signed the Harkin-Engel Protocol and promised to remedy the child labor issues in their companies over ten years ago. The companies' efforts resulted in only about 5% improvement over the last 10 years. This is leaving many human rights groups skeptical that the next decade will result in more drastic changes.

The bottom line is this: profit margins are likely going to take a dip if these companies really step it up, and it's likely that chocolate prices will go up, too. But I think that we, as a society, need to be willing to see this through, even if it costs us something. Because no bar of chocolate is worth robbing a child of their childhood.

It concerns me that we, as consumers, are not demanding that this be stopped. People continue to buy chocolate even after learning about the harm to children in Africa. I've heard excuses from people in my own life trying to absolve their guilt. We rationalize that we can't afford fair-trade. We joke about how addicted we are. We justify that we can't change everything, so why bother? We soothe ourselves with the idea that these children are earning enough money to support their family. (They're not.) And I think secretly, we don't relate because these are kids in a far-off country, and not our own. It's okay as long as we don't have to see it happening right in front of us.

Well, I'm here to ruin it for you. Now you know. We can't keep looking away. If we choose willful ignorance on this one, then we are accomplices to the people who are directly taking children from their families to work. I encourage you to watch the BBC documentary about this issue here. Even the first ten-minute segment is eye-opening, but the whole thing will wreck you... and you will be better for it.

My family is breaking up with commercial chocolate, or buying fair trade. I hope you will, too. If you are motivated to make your Halloween purchases more ethical check out this comprehensive guide to buying ethical Halloween treats.