In Delhi, Ohio this Wednesday (October 29) a Halloween celebration will take place at Mount St. Joseph University. A "spooky" tunnel and lots of candy are the feature attractions.

It's for a great cause as canned goods are being collected by the school's Campus Activities Board. The food will be donated to the nearby Anderson Ferry Pantry. Thousands attend this night of trick-or-treat, making it a huge event fighting hunger in the community. 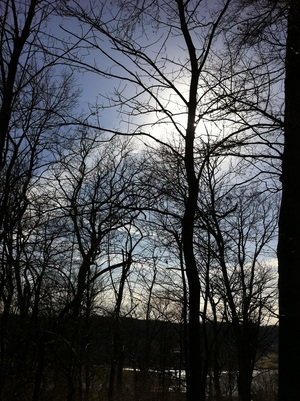 But just a stone's throw away from the festivities are the mysterious woods along the Ohio River. They have a ghostly tale of their own.

Starting in the early 1800's this part of Delhi was host to some strange occurrences, that no one could explain. Lights would flash from a cemetery and the eerie tune of a fiddler would play in the dark of night.

No one dared venture back to the cemetery once the sun went down. They were too scared! The Legend of Fiddler's Green was born.

Fast forward to the 1960's when Mount professor Cecil Hale launched an investigation into this legend. He determined it was indeed real, in a sense.

Back at the time the legend got started, the Underground Railroad was active along the Ohio River. This was the secret route that helped slaves escape to freedom. Abolitionists, those who wanted to end slavery, lived in Delhi and throughout Cincinnati. The Ohio River was the crossing point to escape the slave states of the South.

Professor Hale reasoned the ghostly aura of the cemetery was created to help the Underground Railroad. Those strange lights were signals to runaway slaves on the other side of the river. These messages guided them to safety. With people scared of the cemetery, this activity could go on without interference.

The Underground Railroad had to be kept secret. Slave hunters roamed the country seeking those who escaped. Fugitive slave laws made it a crime, even in the free states, to help a slave get away. Abolitionists ignored this law and instead did what was right. They kept the Underground Railroad moving. They were the guiding lights onward to freedom into the North and Canada.

Sister Margaret Loretto, a Mount dean, helped inspire Professor Hale to write a play called the Legend of Fiddler's Green. It was based on the ghostly tale and the Underground Railroad.

Loretto believed the great history of the Delhi hills needed a tribute. These were the Hills of Freedom. And Hale delivered. The Cincinnati Enquirer theater critic, E.B. Radcliffe, called the play "a dandy." It was performed at the college theater. A copy of the play still resides in the Cincinnati Public Library.

So in a sense, the Mount's Halloween food drive and the Legend of Fiddler's Green both share a common purpose; to help those in need. Meals will be provided to the hungry because of this week's trick-or-treat event.

And many, many years ago people escaping the horror of slavery were aided by the citizens in Delhi and surrounding areas. They found safe passage, a warm meal and shelter because of this generosity.

So while Halloween and ghostly tales may look scary on the surface, appearances can be deceiving. It's really about social justice and charity. But on Halloween night if you start seeing lights and the tune of a fiddler coming out of the darkness, well good luck!