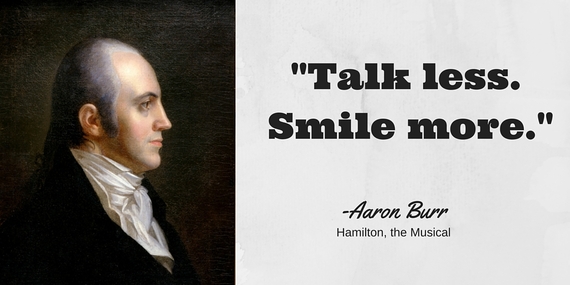 George Washington's two most famous cabinet members, Founding Fathers Thomas Jefferson, freshly returned from serving as Ambassador to France, and his young nemesis, the feisty Secretary of Treasury Alexander Hamilton, in a preview of partisan fights since, disagreed over the limits of federal government power. In the blockbuster Broadway musical Hamilton, they go toe-to-toe in a rap battle on this issue and Secretary Hamilton, who's meteoric rise was driven by the power of his writing and rhetoric, spits:

And another thing, Mr. Age of Enlightenment,
don't lecture me about the war, you didn't fight in it.
You think I'm frightened of you, man?
We almost died in a trench
While you were off getting high with the French

Despite his stirring rhymes, Hamilton, who served as George Washington's secretary and "right-hand man" during the Revolutionary War, has difficulty winning this particular policy stand-off because Congressional approval is required. George Washington reminds him in the end of the song that, "Winning was easy, young man. Governing's harder."

President Obama, who intimately understands how difficult working with the legislature can be, saw Hamilton the musical with his two daughters last July, calling it, according to his press secretary, "fabulous" and exclaiming "it lived up to the hype". The popularity of Hamilton and novelty of the president's attendance inspired journalists to draw similarities between the two.

Both grew up on islands on the U.S.'s periphery -- Hamilton in St. Croix and Obama in Hawaii. Both grew up without fathers, and both even attended King's College, which was renamed to Columbia University after the Revolutionary War. Both were also known for relying on, "skill with the quill that's undeniable", in the words of Aaron Burr in the musical, to climb to the heights of American government.

What they left out was that both Alexander Hamilton and President Barack Obama also found the limits to what persuasive speech can accomplish: Hamilton, in his disagreement with Thomas Jefferson, and Barack Obama, in almost every legislative initiative he's put forth, currently the Trans-Pacific Partnership, a legacy-defining agreement that's a crucial part of the U.S.'s pivot to Asia and has to be approved by the Republican-controlled Congress.

President Theodore Roosevelt famously nicknamed the presidency the Bully Pulpit, meaning it is a terrific platform for advocating an agenda. This is a traditional view of the presidency, which President Obama, as a skilled orator, should be able to take advantage of in advocating for the Trans-Pacific Partnership. Ezra Klein, in an incisive New Yorker piece from March 2012, argues that although this is a common view and rhetoric is helpful while campaigning, it has little use for sitting presidents. Not only that, he says it may also be detrimental, citing the work of Frances Lee, Professor of Government and Politics at the University of Maryland, who argues that presidential ownership of an issue and presidential speeches cause politicization and create partisanship where there might not have been any before. This effect is likely magnified during an election year. Speeches will not be enough for the President.

In the song, The Room Where it Happens, alluding to the allegorical smoke-filled room, Aaron Burr asks Hamilton, "Now how're you gonna get your debt plan through?" Hamilton responds, "Talk less. Smile more...Do whatever it takes to get my plan on the Congress floor." Hamilton ends up coming to an agreement with Thomas Jefferson and James Madison, securing the necessary votes for the debt plan in exchange for moving the U.S. capital from New York to the Potomac right next Jefferson and Madison's home state of Virginia. He learned his lesson about the limits of rhetoric. 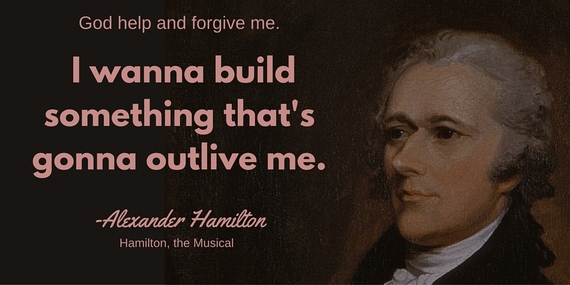 And if President Obama wants to secure Congressional approval of the Trans-Pacific Partnership and his historic pivot to Asia, he needs to take this lesson to heart. He needs to avoid calling attention to the TPP until its done, and he needs to do some wheeling and dealing to get the Republican-controlled House and Senate, whose leaders, Speaker Paul Ryan and Majority Leader Mitch McConnell have recently expressed reservations about TPP, to consider the agreement and to secure the necessary votes.

Barack Obama is not known for being a skilled practical politician. In April 2013, after the Newtown massacre, when 20 children between the ages of six and seven were murdered, and with 90 percent of America behind him, Barack Obama was unable to secure the Congressional votes he needed for gun control legislation to be passed. This difficulty in securing votes has been a theme in his presidency, which has been unkindly compared, like many presidents since, to Lyndon Baines Johnson's administration, known for its forceful political ways and back-room savvy. In the Pulitzer-prize winning book Master of the Senate on President Johnson, biographer Robert Caro writes in a comparison that could also apply to Barack Obama, "President Kennedy's eloquence was designed to make men think; President Johnson's hammer blows are designed to make men act". While President Obama does faces different political realities than President Johnson, who was buttressed by a two-thirds majority in both the House and the Senate, there is, nevertheless still the possibility for back room wheeling and dealing to secure certain legislative priorities.

Last June, in a vote over whether to give President Obama more expansive trade powers, after a complicated and quite exciting series of maneuvers, Congress approved the bill known as Trade Promotion Authority or Fast Track Authority, which drastically simplified the process for approving the Trans-Pacific Partnership and other trade bills. In a rare alliance with the president, Republicans formed the bulk of support for the bill, while President Obama, with severe difficulty, marshaled the few Democratic votes necessary for passage. This vote is indicative of the coalition that'll be necessary to approve TPP. However, now, with Republican leaders questioning TPP and partisan resistance at a high prior to the elections, it will be more important than ever for President Obama to make deals and apply pressure.

Trade Promotion Authority, was passed together with a bill that helps workers whose jobs move overseas, a Democratic priority, and a bill to allow sub-Saharan African countries easy access to the U.S. to encourage private sector development there, legislation highly popular among both Democrats and Republicans, especially the Congressional Black Caucus. President Obama should offer measures similar to these, in private conversations with Congressional members, as he lobbies for TPP. For example, the Earned Income Tax Credit could be expanded to increase the income of workers, who lose their jobs or have their salaries decreased. More aggressive trade support, for instance experimental trade interventions like matchmaking so that companies in Africa can be connected to sell to U.S. companies should be explored since trade support for Africa is incredibly popular and is likely to be detrimentally affected by increased competition from countries in Asia. The WTO agreement to help poor countries more easily export and import is a good start, but all measures should be combined with testing so we actually know what works and what doesn't. Furthermore, this could bolster President Obama's lackluster legacy on Africa.

After Hamilton makes his deal, Aaron Burr, asks, "Did you know, even then, it doesn't matter where you put the U.S. Capital? You got more than you gave."

If Obama is concerned with his legacy, it is time to put aside stirring speeches and begin the dirty work of getting the legislature's support.

Writing on defense and foreign affairs