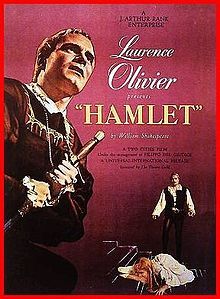 "a man living in meditation, called upon to act by every motive human and divine, but the great object of his life is defeated by continually resolving to do, yet doing nothing but resolve."

However, is this last not an action, if we take the existentialist view that existence precedes essence and man is defined by his actions? Hazlitt supports this conclusion when he remarks,

"It is not from any want of attachment to his father or of abhorrence of his murder that Hamlet is thus dilatory, but it is more to his taste to indulge his imagination in reflecting upon the enormity of the crime and refining on his schemes of vengeance, than to put them into immediate practice. His ruling passion is to think, not to act."

But who do we prefer, the man whose action is action or the man whose chief action is thought? Hamlet has a clear chance to do away with Claudius, but his reaction is almost juridical. He realizes that killing his uncle while he's praying will be more a sanctification than a punishment, with the result that his uncle may well end up in his heaven, while his father's ghost continues to languish in purgatory. That's just good thinking. The specialty of the man of action is seldom an appreciation of consequences and such impulsiveness often comes at a price. A chess grandmaster's actions, by definition, comprise an extraordinary level of premeditation, but he or she is generally a mnemonic prodigy. Many politicians, who are quick to act, are not blessed with great memories, especially when it comes to history and hence end up getting us into quagmires like Iraq. On the other hand would we wish to have a Hamlet as the leader of our country? What about the philosopher king? The answer is a likely "no" since such a surfeit of consciousness is, as we have seen in the case of Hamlet, a precursor to madness. Hamlet prefigures the kind of interiority that Dostoevsky described in his characters. Yet would you go to the Underground Man for advice? Even considering the kind of men and women of action who are currently running for president, would you defer to a reformed criminal with a highly developed moral universe--like say Raskolnikov? Would you vote for Hamlet?