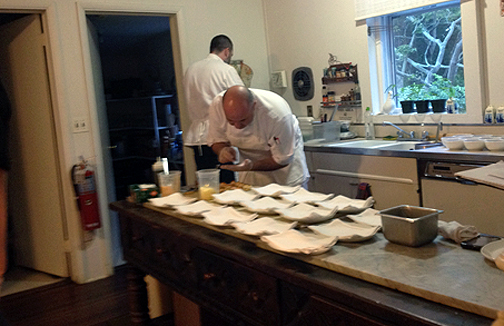 Out on Eastern Long Island, real food and real estate rule, somebody who knows recently told me. This wisdom was proven at a special dinner at the Pollock-Krasner House on the waterfront Springs site where the artist couple lived, and at Guild Hall's annual Garden as Art tour featuring vegetable gardens at several spectacular estates. On a late August Thursday chef Michael Rozzi from East Hampton's 1770 House, riffed on the recipes found in Robyn Lea's Dinner with Jackson Pollock (Assouline).Taking the steps for the abstract expressionist's clam pie, he put the filling in a clam shell, like a baked clam, and served it along with Pollock's home baked white bread spread with salmon to a dozen guests seated around the table Lee Krasner acquired to host Jackson's dealers and collectors, a paint splattered tablecloth protecting the oak. Arguably, wildly delicious borscht was the highlight of the menu. Helen Harrison, director for the house and study center, led a tour up the stairs to a room used by Krasner as a painting space for a decade, with its view to Accabonac Creek. As a survival tactic for her marriage, Lee, who could not cook, learned the recipes of Jackson's mother, Stella Mae McClure Pollock, and entertained friends with him on that inspiring site.

In tune with the trend for homegrown food, the panel on Guild Hall's Garden as Art program, featured Kate Baldwin, co-founder of Amagansett's Amber Waves Farm, landscape designer Tony Piazza, and chef Ann Cooper who has taken on the job of Director of Food Service for Boulder Valley School District. Joseph Realmuto, executive chef at Nick & Toni's spoke about sourcing food at the various restaurants he serves including Townline BBQ, visiting livestock in Pennsylvania. Seeds, soil, crop rotation were on the panel's ample agenda.

A pre-talk breakfast included jams from the Golden Pear, exquisite cheeses from Mecox Dairy, and Carissa's breads. A VIP lunch catered by East Hampton Gourmet followed among the raised beds of a vegetable garden at a private residence, tucked in on a quiet East Hampton lane. Waiters served maybe the best dessert I've ever eaten: a raspberry poised on a dollop of cream atop a square of meringue. The whole event made me want to take up farming immediately, and then sobering from that intoxicating thought, I realized I could visit the local farms instead -Quail Hill, Bhumi, Balsam, as well as Amber Waves, and buy, or pick my own, organic produce.