John Tottenham's paintings invite you to on an idyllic date, the kind you only read about in Victorian novels. A picnic, a garden stroll, perhaps a round of golf... these are the sorts of activities portrayed in the equally-sweetly named paintings like "Sweetheart's Paradise" and "Garden of My Heart." And then you see the hand. 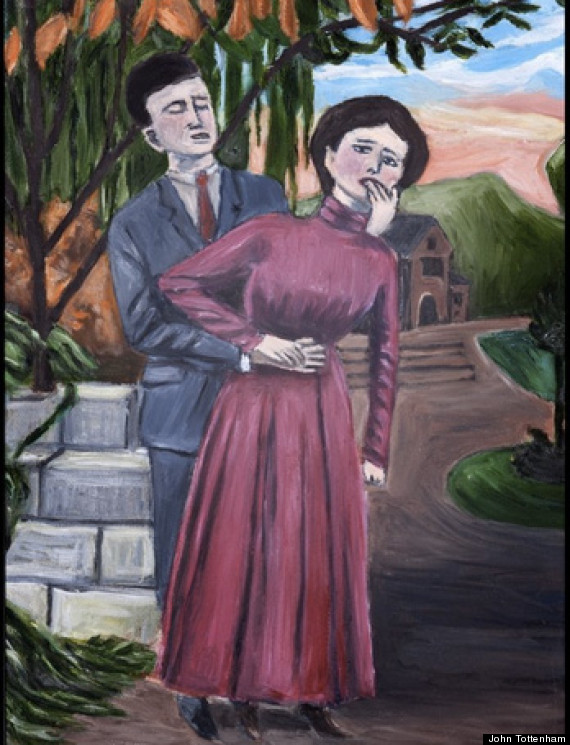 In nearly every work, the gentleman courter has his hand shoved in the mouth of his date. Although viscerally intrusive and disconcerting, the exact motivation behind the hand-in-mouth is unclear. Is he choking his beloved? Shutting her up? Giving a fetish-spurred sign of affection? Is this some boyfriend-induced bulimia? The ambiguous gesture conjures up references to everything from sadistic dentists to the sexually suggestive accomplishment of sticking a fist in your mouth. The picturesque scenes gone rotten remind us of if Edvard Munch began illustrating children's books on etiquette.

Tottenham's paintings feel as if they were lost archives of a bizzarro Victorian practice, covered up out of shame. Like an earlier form of suburban surrealism, they channel a proto-Lynchian taste of the perverse with the most sanitized backdrops. Tottenham, a British poet and painter who calls himself a "failed visionary," injects his wry sense of humor into his poems and paintings, providing some levity onto the oft over-serious gallery walls. Aside from painting, Tottenham has created a name for himself in Echo Park for attempting to ban the word "awesome," a word which, he insists, means nothing at this point in time. Perhaps the unlucky Victorian damsels he depicts were a bit frivolous with this forbidden word?

Tottenham's work will show alongside the work of Tami Demaree and Dewey Ambrosino at Rosamund Felsen Gallery in Los Angeles until August 11.

What do you think is going on in Tottenham's dates gone wrong? Leave your best guess in the comments section, and see a slideshow of his work below.