There are two Hanif Kureshis you should know about, surnames spelled slightly differently. There's the British writer Hanif Kureishi, whose skills make him worthwhile to read as playwright, novelist, short storyist, or really whatever type of writer he decided to be that morning. The other, Hanif Kureshi, is, in his words "29 and from a small town called 'Talaja' in Gujurat."

The opener to the story of why you should know this Kureshi, who is much harder to research than the other, is his childhood in Talaja. Kureshi grew up with streets captioned by signs. He saw many languages: English in Latin script, Hindi in Latin script, Urdu in Urdu script. Some of the letters might have had stars in their joints. Others maybe looped in cursive, red. They advertised soft drinks, movies, jewelry stores, anything and everything. Kureshi wanted to grow up to be one of the men who conjured these signs with a brush and paint.

But when he did grow up, the world was different. Signs were inching magically out of printers instead of from beneath hands, designed by people sitting at computers. Shops switched the rich banners above their doors for vinyl ones, which fade more quickly, but are cheap and quick enough to produce to justify replacements.

Kureshi, now an art director at the New Delhi branch of the Portland ad firm Wieden+Kennedy, decided to stop watching the end of something. With the help of friends living in different Indian cities, he began to track down the remaining men and women (mostly men) whose names were painted into the corner of the rare hand-painted street sign. Some still weilded brushes, more often, now, as a hobby instead of a profession.

Kureshi asked each artist he found to paint all the letters in the Latin alphabet, all the base Arabic numerals, all the common symbols, and send him the entirety. From these genomes of strokes, he started to create digital fonts for each painter. So far, two fonts are ready, one for purchase, one to download for free.

Scroll down to see some of the fonts Kureshi has collected.

The buyable font, Painter Kafeel, has a $50 price, representing $25 for Kafeel, the painter, and $25 toward Kureshi's project, Hand Painted Type. At the project's online store, a blurb explains that Kafeel never went to school. "He moved to Delhi to become a street painter, establishing himself in labyrinth Old Delhi. Like other painters, he too has abandoned his brush for a computer."

The real life Kafeel worked in layers to make his colors rich, painting red on top of red, sometimes up to 9 times. To replicate the effect, Kureshi did away with italics and bold options, instead allowing users to layer as they see fit. You can add Kafeelish detailing such as stars, or one more red coat if you like, or if you prefer simplicity, abstain.

In an email, Kureshi told the Huffington Post that so far he's collected 30 to 35 hand painted fonts. Last month, he launched an offshoot of regional scripts, with Urdu and Devanagiri to start (Kafeel supplied both). The goal is to develop at least 100 unique digital fonts, in a rainbow of scripts.

Kureshi hasn't made any money yet, but he likes the possibility of his project becoming a "good business module." As for the painters' new business module -- driven by keystrokes rather than brushstrokes -- it stays old school in one crucial way. Speaking at a type conference in Berlin, Kureshi cheerfully explained the painter's credo for obtaining font-making computer programs, a philosophy that defines the Indian street: “Always pirated, never bought!”

CLICK through a slideshow of some of the hand painted fonts Kureshi has collected:

WATCH a video featuring some of the artists whose work Kureshi is preserving:

Head to Hand Painted Type for the full selection of fonts, and purchasing information. 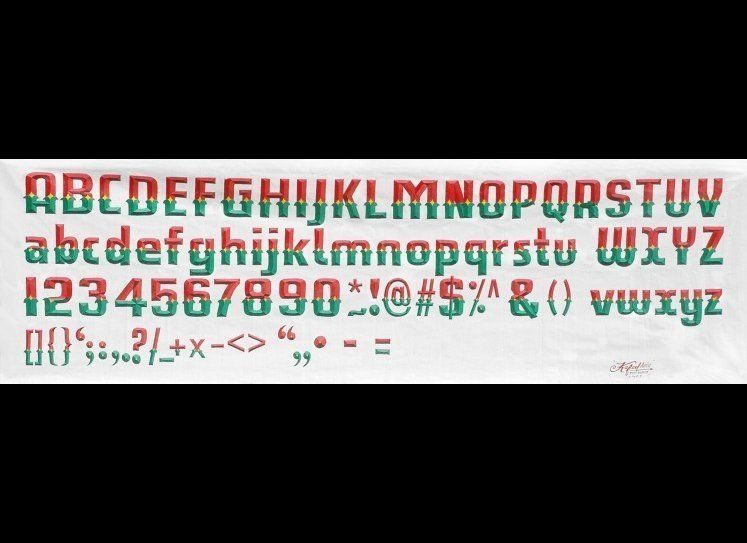