For installment #2 of AWE's Inspirational Female Leaders Showcase Series, we have chosen Denny Post, SVP, Chief Marketing Officer, at Red Robin. AWE, The Association of Women Entrepreneurs & Executives, features a woman each month whose leadership has proven transformational for her colleagues, clients, company and/or community. Thanks to those of you across the country who nominated exceptional women from varied industries to be showcased. We appreciate your generous spirit of elevating women by simply recognizing them. 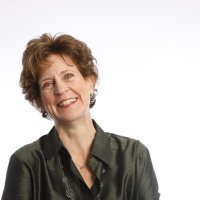 While I spoke by phone with her from Red Robin headquarters in Greenwood Village, Colorado, Denny Post was walking a few miles on her in-office treadmill. She was breathing so effortlessly and was so focused on our conversation that I would have never known she was parallel processing had she not mentioned her activity at the "walkstation." But, that's Denny for you: transparent, high energy, facile at taking on challenges, and unrelenting in her faith that things can always get better. Clearly, this constellation of traits has served her well over 30+ years as a successful leader of consumer driven marketing and product innovation at iconic institutions like Starbucks, Burger King, T-Mobile and KFC. Listen to Denny Post in her own words below and I think you'll see why any of us would be more than happy to sit down with her for a burger anytime.

EL: What one characteristic among all others has enabled your success as a leader?

DP: I think the biggest thing is my ability to paint a vision for what can be and then inspire others to get on board and help realize it. I have always been able to say, "Let's go that direction and here's why." My positive nature tends to drive people to the cause or challenge.

I am a big believer in the original work by Gallup on strengths called "StrengthsFinder." I go back to that in life. My top strengths are ideation, strategic, maximizer, positivity, and relator. What was eye opening to me about this exercise on strengths is the value of emphasizing what you are good at and putting your energies there, while simultaneously surrounding yourself with people who have different sets of strengths.

Breaking down walls is always fun in business. Great leaders don't necessarily know it all, but certainly know how to surround themselves with people who can pull it all off.

EL: Having the self-awareness and humility to admit that you need somebody to compensate for your deficits can be difficult for leaders -- both men and women. It's a rare trait but it goes a long way, don't you agree?

EL: What are you most proud of?

DP: It is not individual business accomplishments. Those have varied. Some have been terrific and some not so great. I am proudest of the handprint I leave on others' backs. Having had an impact on the people around me means a lot. And, I keep track of these people, no matter how long they worked with me or how many years have passed. For example, there is a guy who worked for me at my first job in 1980 and another person who worked for me more recently at T-Mobile. They reconnected with me again not so long ago. They're doing really well now. I take a great deal of pride when they come back and say they learned something in the process of working together. When people reach out to say they feel like I helped them open up to do better things -- that is the absolute best. Business accomplishments come and go, but the impact you have on people -- those are the accomplishments that really last.

EL: Looking back, was there a single person or a game-changing event that expedited your evolution or opened doors for you to get where you are today?

DP: When I was hired out of college to work at an ad agency, Tracy-Locke Advertising, there was a guy named David Novak who ultimately had a big impact on my career trajectory. David is now the chairman of Yum Brands, which has more restaurants around the world than McDonald's, between their three brands. We're still in touch today, but David and I worked together in that initial incarnation at Tracy-Locke. I came back to work for him again at two points in my career. He took risks on me.

Years after we worked together in advertising, I was sitting in Knoxville, Tennessee and, at the time, I had a 12 month old son. My company had been bought out by KKR and they offered me a chance to move to New York. I was about to accept the offer. David called and asked me if I would be willing to come to Louisville instead and work for Kentucky Fried Chicken. On paper it was a step back because I had been a Vice President and he was asking me to be a Senior Director. But, he knew that I had the passion so he took a risk as I wasn't the obvious hire. And, I took a risk too. But, from a family standpoint, it was a much better move for us. Had that not happened in 1995, I most certainly would not be where I am today, having found my way to restaurants including KFC, Burger King, Starbucks and Red Robin.

EL: What's your approach to so called work/life balance, if you believe in such a thing?

DP: I don't think of it as work/life balance. That's a teeter-totter. I have always approached it as more of a pyramid. There are three parts to it- work, family (husband, son, family, friends), and taking care of myself. I think what women tend to leave out is that last part about the self. When men think about work/life balance they tend to think about it as work and working out. Women tend to think about it as work and family. I think it really is a combination of all three things. At any given point, one of the three may take precedence, but the nice thing about a three-point operation is that it doesn't fall over.

I try to eliminate things from my life that don't bring me energy whether that is job-related, or issues at home, or friends that aren't really friends -- more takers than givers. The toughest part is finding time for myself, but I do find this brings me energy. It's not an either or, it's a combination of all three things.

The other thing about maintaining balance is the importance of keeping commitments. As a mom, I always make my commitments to my son very carefully and I make sure I always keep them.

EL: What keeps you up at night?

DP: I think the thing that has become more present in my mind is the rapidity of structural change in our economy and our businesses. Something that I came to appreciate about my two years at T-Mobile was the constant technological change. Now, as I have stepped back out of that industry into more traditional businesses, like restaurants -- and, in our case a mall-based restaurant business. With the advent of online shopping and some unique superstores, the mall itself is on the verge of demise. I've seen Sears teeter and I don't think it's too long before they are gone. I grew up with the belief of these retailers as institutions. The rapidity with which they can just disappear is striking. The movie theater as a destination, the mall as a shopping experience -- these things are fading. How we build social networks and how we entertain ourselves are being redefined daily.

EL: Do you have a guiding principle, mantra or useful practice that helps you be more effective at what you do?

DP: I've been sober for 25 years. For me, once I decided to make that shift, I made it. So I don't feel like I am hanging on by my fingertips for anything at all. Three things underneath that hold true. The first is always being honest. Honesty, transparency -- the whole notion of being able to say what I'm not good at -- that's a guiding principle. Second, I stay very grateful. I try to spend every day thinking about the good things that happened and there is so much. There is something about the simple power of being grateful. So, everyday I try to stay there. And the third principle is about not sweating the small stuff and remembering that nothing is insurmountable. I am a big "never give up" person. There is always a way. I had taken on a project some years ago that the organization had failed at multiple times before. I picked up that project because I believe in this principle. Fall down seven times and stand up eight. I really do believe that. There is always a way. As long as you are willing to learn and figure out how to go back and do it differently the next time and really understand why you failed, then there is always an opportunity to fall forward instead of back.

EL: What is your experience of using your power as a woman in the business world?

DP: I think there might be a pattern about why women are more successful in marketing and HR than in other areas. The reality is that women are in the household and make the majority of those household purchase related decisions. For example, as a woman, I speak for my guests, for our target audience, and I speak from a place of real understanding. I think that gives me a natural advantage. My voice informs what our business is trying to do.

It's toughest when you are the only woman on the executive team. It's hard to be the only female in the room. The more senior you are as a woman, the more likely this becomes. You don't have anyone you can truly trust to give you an honest perspective about whether you are on track. This doesn't mean that men can't do that for you. One of the men that helped me the most was Aylwin Lewis, CEO of Potbelly. He always had a natural affinity for women in roles partially because he had unique perspective as a minority man. He was the one that continually told me to never apologize.

As a marketer it is easier to take a different route because I can literally take the role of the target audience that we are serving. I never felt comfortable with that "Dress for Success" thing. I was more likely to be wearing a Betsey Johnson dress with huge shoulder pads. Part of using your power as a woman -- particularly in marketing -- is acknowledging that you have a different and valuable point of view.

EL: What would like to see as your legacy?

DP: If I have inspired a generation or two by the time I'm done to think differently, to challenge the status quo and to create teams around them who, in turn, create positive change -- that is a great place to be.

In our business there is a lot of opportunity for folks to do this. You can go out and create new environments and be proud looking back at what you've built. The restaurant business is fundamentally a nurturing business. In the end, it is not just about the food we provide, but the experience we offer. At first, I wasn't certain about joining Red Robin. But, as I looked closer, I recognized a deep wellspring of affinity that our guests have for our restaurants. They come in, have a great meal and enjoy a good service experience. They have fun not just food. It feels good to know that they leave happier than when they walked in.