I never thought that I would have to deal with my own mortality in my 30s and at a stage of my life that is supposed to be filled with the happiest moments (marriage and children). There is an extreme loss of innocence and grief associated with losing a breast. It is not something that someone can verbally prepare you for, but being cancer free is better. -- Ayanna Lee

I had the pleasure to interview singer and artist Ayanna Lee in July when she performed for Mr. Refined's Bougie Brunch. She mentioned that performance was her first since her cancer diagnosis. Earlier this year, I wrote Cancer the Antithesis of Birth, highlighting three loved ones diagnosed in 2014. Once again, cancer had reared its ugly head. Although my original intent was to interview Ayanna regarding her music, I needed to tell her cancer story, especially for women of color. Over the next months, we spent weekends talking for hours. As Ayanna explained, before she could tell me her cancer journey, she had to tell me her life story. Ayanna is no victim. She is a survivor, inspiration, and life force to be reckoned with.

After a solo performance at the Brooklyn Academy of Music (BAM), Ayanna seemed to disappear from the scene. Earlier that year she left NYC and spent time in LA. She returned home in DC feeling burnt out. Her mother was diagnosed with breast cancer at 40. Her mother's sisters were diagnosed at 50 and 66. Therefore, she knew that she had to be proactive. She started early screening at 30 due to her family history.

Ayanna credits early screening for catching her cancer. She was not sure if it was a combination of exhaustion and life, but something was off. When a routine mammogram checkup warranted another biopsy, she was concerned because she had a biopsy before. Fortunately, the prior biopsy made it easier to confirm her cancer diagnosis. She was diagnosed the day after Christmas 2014. Instead of privately dealing with her diagnosis, she went public on Facebook to inform friends and family.

Based on results from her oncotype test, she did not require chemotherapy or radiation. However, she did have a mastectomy, a removal of her left breast which included the nipple because one of her tumors was close to the nipple it could not be saved. She had a nipple reconstructed breast with a horizontal scar across the skin. Ayanna expressed frustration on the lack of awareness and information for women, especially women of color. Dense breast tissue is the norm for African-American women, which can make it harder to find cancer on a mammogram. "So why not use something other than a mammogram for African-American women if this is known?" Her cancer was the size of a rice grain, likely only to be picked up with 3D mammogram technology, but still hard to detect in women with dense breast tissue. 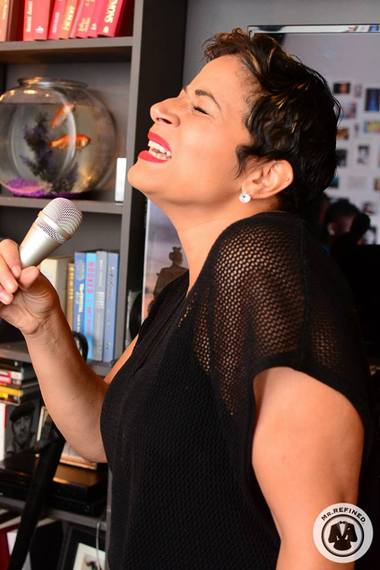 Ayanna received her six month clearance in July. Right now, she is going through an anger stage. It was necessary to remove the nipple, but she has no sensitivity in her left breast. She elected to keep her right breast so that when she has children she can breastfeed. However, that too will have to be removed as a precautionary measure to avoid recurrence. Ayanna was chubby as a pre-teen and had body image issues. She lost weight, but the one part of her body that she "wasn't mad about" was her breasts. Now they had to go! She said, "It feels like an impairment. There's complete numbness in the area. The dynamics of a sexual organ that also gives life is forever changed and I'm only in my 30s." Not knowing how her fertility would be affected, she went through IVF after the mastectomy and successfully retrieved eggs and had five embryos frozen. However, the fertility therapy added another layer of stress. She gained close to 30lbs since her diagnosis. The extra weight gain gave her lopsided breasts as her right breast became bigger, but her left implant is smaller. She did not want to get a permanent implant that would be larger than her right breast once she returned to her normal weight.

Before cancer, Ayanna was an ambitious indie artist used to taking control of her life. Since cancer, life changed dramatically. There is the vexation of being tired of sitting at home, yet starting a new job and barely having energy when she first went back to work. "It's hard to be patient. I have to continually remind myself that I am not a year out. It takes the body a long time to adjust from surgery." Maybe Ayanna was lucky to have surgery instead of chemo and radiation.

After following up with Jenny, I found out that chemo and hormone based therapy can cause early onset menopause. Jenny's chemo resulted in a year of no sex because the chemo induced menopause and sex was very painful. Jenny commented, "I'm in my 30s but my body feels like a 60 year old and the thought that it could be permanent was enough to think that life was not worth living under those conditions." Fortunately for Jenny, a few months after her chemo ended her menstrual cycle returned and she could have sex. Other women are not as fortunate if after chemo they must continue hormone based treatment.

1. Aggressively research your family history.
2. Demand early detection via screening. The problem with self-breast exams is that the cancer has to big enough to feel.
3. Take preventative gene testing.
4. Get therapy not just for cancer coping but larger mental health issues that encompasses.
5. Get your circle of support.
6. Get as many second opinions as needed.

You cannot beat cancer if you don't deal with it. For more information, click here.