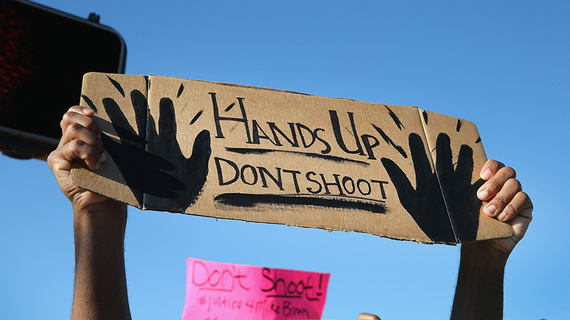 Unless you've been living under a rock, you know something about what is happening in Ferguson, Missouri, this week. Depending upon where you get your news, you've either heard about a devastated community trying to peacefully protest the murder of an unarmed black teenager at the hands of police or you've heard about violent, angry black people looting and antagonizing police because a gang member reached for a police officer's gun.

I started shaking in anger typing out the later part of that sentence. This is racism in America.

Mainstream media don't want to acknowledge the basic humanity of a dead black kid. We see it all the time. Just look at #IfTheyGunnedMeDown.

I'm horrified and outraged that it is not safe to be a black person in America.

What I've unfortunately discovered (and because of my white privilege, I remained unaware for too long) is that a whole lot of white people don't seem to care at all that this is happening. They want to ask what Michael Brown was doing wrong when he was gunned down, unarmed with his hands up, asking the officer not to shoot.

They want to remind me that "most police officers" are good, upstanding people who do their job to uphold the law. They want to say "what about black-on-black crime" as if that is something to excuse murder, as if "white-on-white crime" doesn't happen. They want to believe he was a gang member, as if that would justify him being gunned down in the middle of the day.

They want to blame black people for the crimes committed against them.

The truth is that no matter how black people behave in America, there are white people who will murder them. And try to cover it up. And most of the time, they get away with it.

What that breaks my heart is that this is not news to black people. They deal with this all the time. They have learned to expect the worst out of white people.

I think, or would hope, that with enough educational information and enough patience, the ignorantly ignorant white people can learn to recognize their own racist attitudes and begin to reject them. I think it is possible to educate someone out of ignorance. After all, ignorance just means a lack of knowledge or information. I would hope that people, when educated, would be able to see how horrifying it is that a black man is extrajudicially executed in the United States every 28 hours.

But what do we do about people who are willfully hateful and ignorant?

I don't have the answer. I'm actually asking.

There are many much more capable and involved people writing about this issue. There are people on the ground protesting, spreading images and video of what's happening. If you are interested to get involved, to help, or just inform yourself, do some research. Follow #Ferguson #JusticeforMikeBrown and #DontShoot.

For me, for now, I'd just like to take the rest of this space and honor the black lives taken too soon. My heart and thoughts go out to their families and friends, and to our nation, which I hope can come together, address these issues and heal. If you're a praying person, say a little prayer for those listed here. If you don't pray, send some love in your thoughts.