This is the story of two young Latinas with the same name, living in the same Southern city, one having recently graduated from college, the other just beginning there, both in the same field. The women immigrated to the United States as children with their parents and both learned as teenagers that they were undocumented. But because of decisions made far away from them, their stories are taking different paths and, without action, their futures are now looking quite different.

Meet Carla Mena and Karla Salgado. Carla Mena moved to Raleigh, North Carolina, from Peru in 2001, when she was 11. She quickly learned English after being put into ESL classes. A few years later in 2009, 13-year-old Karla Salgado arrived in Raleigh from Mexico. She began middle school and had to learn both a new language and a new culture. Both girls rapidly adapted and excelled in their classes. By high school they were taking AP courses and getting almost straight A's. 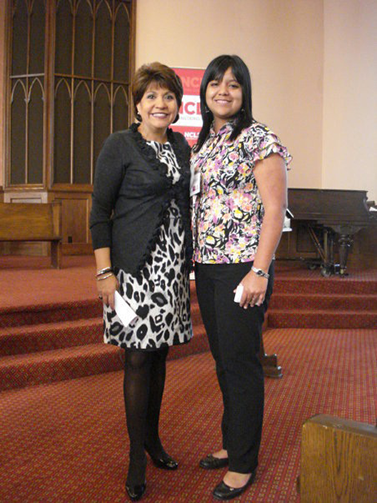 As graduation approached, the young women, each an outstanding student, faced the same barrier: they could not afford the high out-of-state tuition at public universities and they were ineligible for financial aid as undocumented immigrants. Both girls had big dreams that were in danger of being crushed because of their immigration status. Luckily, both girls found a small school in Raleigh called Meredith College that sees the potential in all young women and welcomes diverse students. Carla graduated from Meredith in 2012 with a degree in biology and Karla started there last month declaring a biology major. (Pictured at right: Carla Mena (r) with NCLR President and CEO, Janet Murguía; Pictured below: Karla Salgado) 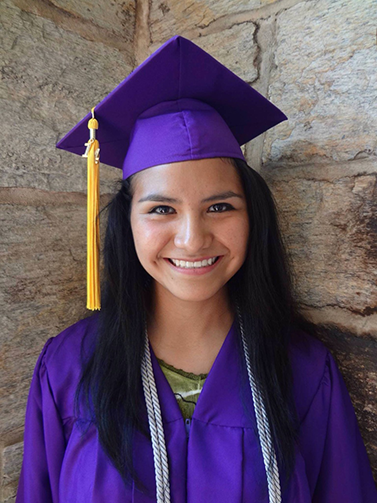 But here is where their stories diverge. Because Carla came to the United States earlier than Karla, she is eligible for Deferred Action for Childhood Arrivals (DACA). Shortly after Carla graduated from college, President Obama announced DACA, which grants work permits and temporary relief from deportation to certain undocumented youth who meet specific criteria. With her degree, she was able to attain an excellent job as a senior research assistant at the Duke University Global Health Institute's Center for Health Policy and Inequalities Research.

In contrast, Karla arrived in the United States in 2009, missing the deadline for DACA by two years. Her dream is to become a nurse anesthetist. But without a work permit, Karla's future is very uncertain and her contributions to America will be limited.

Despite their tenuous status in their adopted country, the young women's commitment to their community remains strong. In recent months, Karla was appointed by Raleigh's mayor as the youngest member of the Downtown Plan Advisory Committee. Carla is also giving back to her community and was recently selected to serve on the Board of Trustees of the Wake Health Services. Both girls also volunteer on the Youth Council at El Pueblo, Inc., an NCLR Affiliate.

"If you could just take the time to meet ten Latino families around the country, you would understand why we cannot wait. You would know why we need this now and not when it's comfortable for you," Carla said when asked what she would tell President Obama if she had the chance. "In the Latino community, our word means everything. A promise means a promise. It's hard to get that trust back."

Karla was equally eloquent. "My status has broken my dream into pieces. I have worked hard to get where I am. I have scholarships to college but it will be in vain because I won't be eligible to work when I get out. Please don't tear my dreams apart. It's not about politics. A piece of paper can change everything."

The two women have made a positive impact in their communities. Their teachers, employers, and classmates all support administrative action that will allow these young women to continue their contributions. Since Congress has failed to do its job, we need to stand up for our community and urge President Obama to provide relief to aspiring Americans like Karla.

These young women are our future; we must give them a future.