China's zoos have long since been criticized for instances of animal abuse. But, despite past crackdowns, instances of apparent animal cruelty have continued, as a series of photos showing Hangzhou Zoo visitors throwing snowballs at lions surfaced this week.

According to China Daily, the photos -- taken at Hangzhou Zoo on Jan. 5 and later posted on China's microblogging site Sina Weibo -- were shared countless times and received thousands of comments criticizing the abuse.

Breeder Zhu Yan told Xinhua News Agency that zoo workers did not see visitors throwing snowballs since they were busy clearing snow at the time.

"Although snowballs can't hurt large animals like lions, the behavior upset us nonetheless," Zhu said. "Our animals should be treated fairly. We hope our visitors will use some self-discipline and be nicer to them."

According to reports, a sole visitor threw the first snowball, inciting others to join. The lion and lioness huddled together, as seen in the photos, until the attack was over. In the end, the male lion let out a roar and starred down the visitors as they walked away, the Global Times notes.

The snowball incident may not be the first instance of apparent animal cruelty that has taken place at Hangzhou Zoo. As Redditor Triviumsogerd recalls:

The sad thing is, this is way better than what they normally throw. When I went LAST YEAR people were throwing anything they could get their hands on at the animals. Such as full plastic water bottles, coke cans, also full, rocks, and the worst part is NO ZOO STAFF WAS PRESENT.

Although the Chinese government has banned certain types of animal abuses at its country's zoos in recent years, the restrictions do not apply directly to the behavior of the zoo's visitors. 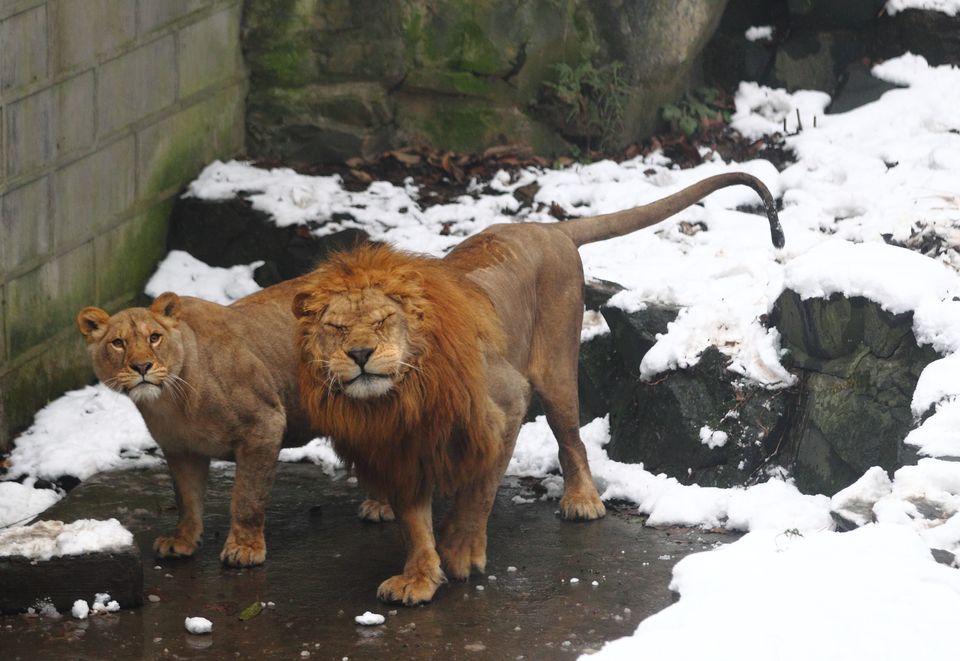 1 / 5
A lion couple is about to be hit by a snowball thrown by a visitor at Hangzhou Zoo in Hangzhou city, east Chinas Zhejiang province, January 5, 2012.
ImagineChina