NASA astronaut Henry "Hank" Hartsfield, who in 1984 commanded the maiden mission of the space shuttle Discovery, died on Thursday (July 17). He was 80.

Hank Hartsfield's death came as a result of complications from back surgery he had several months ago, according to his fellow astronaut and STS-41D crewmember Mike Mullane.

"Obviously, I have many, many memories of my time with Hank," Mullane wrote online on Thursday. "He was a great commander and pilot and I'll always feel honored to have been a member of his crew."

Launching on Columbia on June 27, 1982, Hartsfield and commander Thomas "Ken" Mattingly circled the Earth 112 times while performing experiments and operating a pair of classified missile launch-detection systems. Returning to Earth a week later on Independence Day, the STS-4 crew was greeted by then-President and First Lady Ronald and Nancy Reagan at Edwards Air Force Base in California.

The STS-4 mission was the last to be flown before NASA declared the space shuttle operational.

"'Operational,' to me, is a tough term to explain," Hartsfield told collectSPACE.com in a 2006 interview. "In my view, the whole time we were flying [the space shuttle] it was a test vehicle, although we called it operational. We used it and did a lot of great things [but it was not] operational by the way I look at it, having been a test pilot and looking at airplanes."

Originally scheduled to lift off in June 1984, Hartsfield and his crew of five were just four seconds from launch when a faulty main engine forced the shuttle program's first-ever abort, followed by a hydrogen fire on the pad. It took two months to recover, but Discovery safely launched on Aug. 30 on a six-day flight to deploy communication satellites and conduct science. [Space Shuttle Discovery: 10 Spaceship Facts]

During the mission, Hartsfield and his crewmates gained a nickname, the "Icebusters," after using the shuttle robotic arm to successfully knock off a hazardous ice buildup on the outside of the orbiter.

"We had to get rid of the icicle because if it stayed on there, the concern was that when we started entry [back into the Earth atmosphere] it was just about the right place to break off and then hit the [Orbital Maneuvering System] pod," Hartsfield explained in a 2001 NASA interview. "If you hit the OMS pod and broke those tiles... that's where the propellant is for the OMS engines, you know, and that is not a good thing to have happen."

"I operated the arm and broke the icicle off," he recalled. "We were really relieved to see that go away."

Hartsfield returned to orbit for his third and final flight as commander of Challenger's STS-61A mission in October 1985. In addition to being the first flight to be funded and directed by a foreign country (the former West Germany, overseeing the European-built Spacelab module mounted in Challenger's payload bay), the eight-member 61A crew set the record for the most astronauts to launch and land on the same spacecraft.

The seven-day flight conducted more than 75 experiments over the course of 112 orbits, marking the last time space shuttle Challenger would fly in space. The orbiter was lost in flight in January 1986.

With STS-61A's landing, Hartsfield had logged a total of 20 days, 2 hours and 50 minutes in space, having circled the Earth 321 times.

"I flew on Columbia, Challenger and Discovery," Hartsfield told collectSPACE.com in 2009. "I was fortunate to be the commander of the first flight of Discovery, and [it] turned out to be a pretty doggoned good bird."

Hartsfield joined the Air Force in 1955 and graduated from the test pilot school at Edwards Air Force Base, where he was serving as an instructor when he was recruited as an astronaut trainee for the Manned Orbital Laboratory. The project would have seen Hartsfield fly to space onboard a Gemini spacecraft to work on a reconnaissance platform, had it not been canceled in 1969.

With the end of the MOL program, Hartsfield and six other trainees transferred to NASA's astronaut corps. Before his own three shuttle flights, Hartsfield served on the support crews for the fifth moon landing, Apollo 16 in April 1972, and for all three missions to the United States' first space station, Skylab, between May 1973 and February 1974.

Hartsfield retired from the Air Force in 1977 but continued at NASA well beyond his time flying in space. He served as the deputy chief of the astronaut office and the deputy director of flight crew operations at Johnson Space Center in Houston before holding management positions at NASA Headquarters in Washington, D.C. and at Marshall Space Flight Center in Huntsville, Alabama.

Before leaving NASA in 1998 to become an executive at the Raytheon Corp., Hartsfield helped set the ground work for the International Space Station, serving as the deputy manager of the space station projects office, among other positions related to the orbiting laboratory. He retired from Raytheon in 2005. 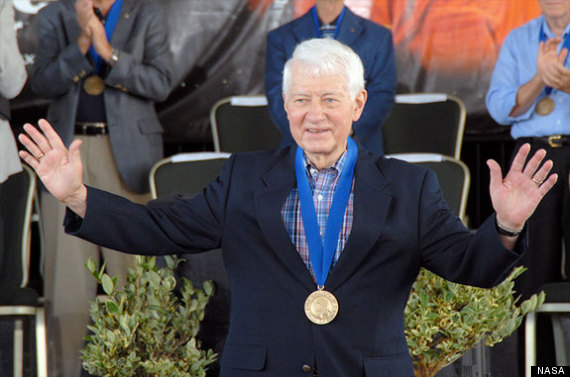 Hank Hartsfield thanks the audience for its applause at the 2009 U.S. Astronaut Hall of Fame induction ceremony.

Awarded Air Force and NASA medals and the recipient of the 1973 Gen. Thomas D. White Space Trophy, Hartsfield was inducted into the Alabama Aviation Hall of Fame in 1983 and U.S. Astronaut Hall of Fame in 2006. Hartsfield was bestowed an honorary doctor of science degree from his alma mater, Auburn University, in 1986.

Hartsfield is survived by his wife Judy Frances Massey, daughter Judy and two grandchildren. He was preceded in death by his daughter Keely, who worked as a contractor to the space shuttle program and died in March 2014.

Astronaut Hank Hartsfield, Who Led First Flight Of Space Shuttle Discovery, Dies At 80
Early Space Missions And The Astronauts Who Led Them