In just under a year, Hanna Hopko has gone from being a ringleader in anti-government protests to taking a seat in Ukraine's new parliament.

Her trajectory is symbolic of the momentous shifts Ukraine has undergone in the past 12 months. Her story also highlights the challenges faced by the young activists who ousted former President Victor Yanukovych and now seek to implement their vision of a more democratic, less corrupt Ukraine.

Hopko, 32, was a civil society advocate when Ukraine's Orange Revolution broke out in 2004. She joined thousands on the streets protesting against an election widely thought to have been rigged. Their demand for a re-vote was met, but their high hopes for Ukraine were not. The country's new leaders were ultimately judged to be as corrupt and disappointing as the ones they had replaced. Ten years later, Ukraine's democracy activists want to make sure their revolution is not hijacked again.

In November 2013, Ukrainians took to the streets of Kiev again, after Yanukovych suspended talks on closer cooperation with the European Union in favor of strengthening ties with Russia. Their protests were quickly dubbed the Euromaidan movement -- "Euro" for the activists' look westward for a model of more democratic government and "Maidan" for a central square in Kiev where Orange Revolution demonstrators had gathered and where once again people called for a better future.

Hopko described the first days of the Euromaidan protests in an interview with The WorldPost in Washington, where she spoke at a conference earlier this week. "It was so important to us to protect our dignity and our right to be part of the European community," she said. 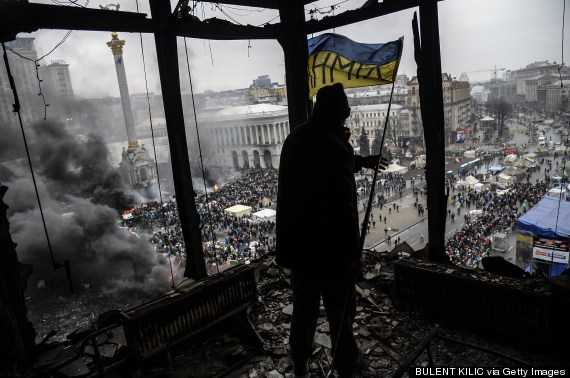 State security forces launched a brutal crackdown on the protests, drawing more outraged Ukrainians to the streets. For months, as a coordinator of the pro-democracy group Civic Sector of Euromaidan, Hopko labored to bring the protesters' cause to the world's attention. When she was threatened, she sent her young daughter out of the capital, but she rejected her husband and mother's pleas to leave, according to The Christian Science Monitor.

In February 2014, Yanukovych fled Kiev and a new government pledged to address the protesters' demands. Hopko has since been courted by the very political institutions she once railed against. She said she turned down her first offer of a government position in March and instead helped found a civil society group to develop a package of reforms aimed at the corruption ingrained in Ukraine's institutions.

But eight months passed, and while Ukraine's government grappled with Russia's annexing of Crimea and fomenting of an armed rebellion in the eastern parts of the country, reforms fell by the wayside.

"There are lots of imitations of reforms. ... Most are still postponed," Hopko said. "The war is not an excuse not to do reforms."

So Hopko decided to enter politics herself. She said she turned down offers to join the main political parties ("I realized they are not interested in real reform," she said) and signed on with Samopomich (meaning "self-reliance"), a new party dominated by young activists. She topped the party's list of candidates in the Oct. 26 election and won a parliamentary seat -- as did 32 of her party colleagues. Samopomich all together took about 11 percent of the vote, making it the third most popular party after those of President Petro Poroshenko and Prime Minister Arseniy Yatsenyuk.

On Friday, Hopko learned that she had been proposed for another ministerial position by the prime minister, amid ongoing talks to form a coalition government. Again, she turned it down. 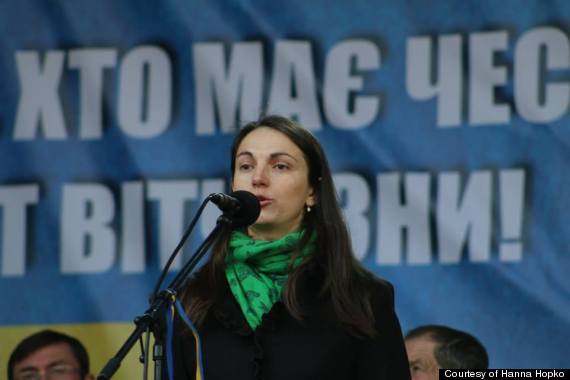 Hopko argued that she and her party can be a model for a more honest, professional form of politics. "In the 23 years since Ukraine's independence, we knew lawmakers as people who wear luxury brands and drive expensive cars," she said. "Oligarchs ruled the parliament, and there was very little politics."

"We want to show that MPs have to compete for votes," she added.

The task is formidable. After Ukraine broke from the Soviet Union in 1991, a powerful oligarchy emerged as politically connected figures bought up state-owned businesses on the cheap, Al Jazeera America explained. Their money bought them influence in politics and the press.

"The old system is still resisting," Hopko said. "There are people in power who still represent the regime of Yanukovych. They just changed the mask, but they are the same. They make their money from state budgets. And they are not interested in reform."

Hopko contends that such entrenched interests were behind a series of personal attacks on her and her family, as well as her party colleagues, in the oligarch-owned press during the election campaign. "It was very hard for me," she said.

She now has an opportunity to change the system from within, with all the fresh dilemmas that entails. The leaders in Ukraine's young democracy don't always take kindly to criticism. Moreover, Hopko doesn't want her words to be twisted by Russian President Vladimir Putin to further destabilize her country. Nonetheless, she reeled off a list of officials she argues are not up to the job.

"You can't have the fear to deliver the truth about the situation," she said. Hopko repeatedly stressed that it's up to Poroshenko to break with the oligarchs.

Her sense of urgency was palpable. If people don't see changes and the economy continues to flag, Ukraine could explode in a new and more violent uprising, Hopko warned. 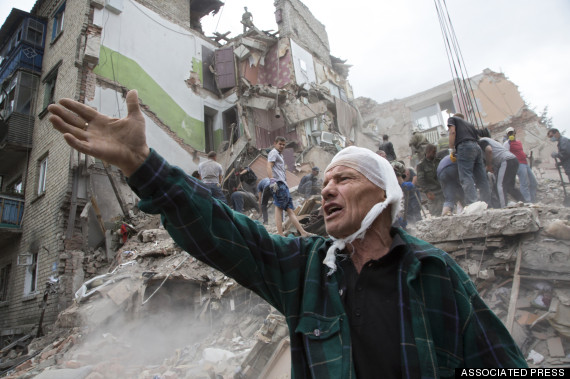 A man stands by a building hit by an airstrike in Snizhne, eastern Ukraine, July 15, 2014. (AP Photo/Dmitry Lovetsky)

"The third Maidan will not be so romantic, led by people with Ph.D.s and Western education. ... It will be popular discontent and it could destroy our country," she said. "Ukrainians' trust in the government is running out."

"Decades of unprecedented corruption are like a cancer in Ukraine. They weakened our position in the world and destroyed our army," she said. "Billions of U.S. dollars were stolen, and therefore they couldn't be invested in the military or the economy."

While Ukrainian leaders reportedly grew rich, the country ran up huge debts and will likely be paying the price for many years.

Hopko wants to leave a better legacy for the next generation. She said her 3-year-old daughter shouldn't have to suffer for more mistakes by the Ukrainian government.