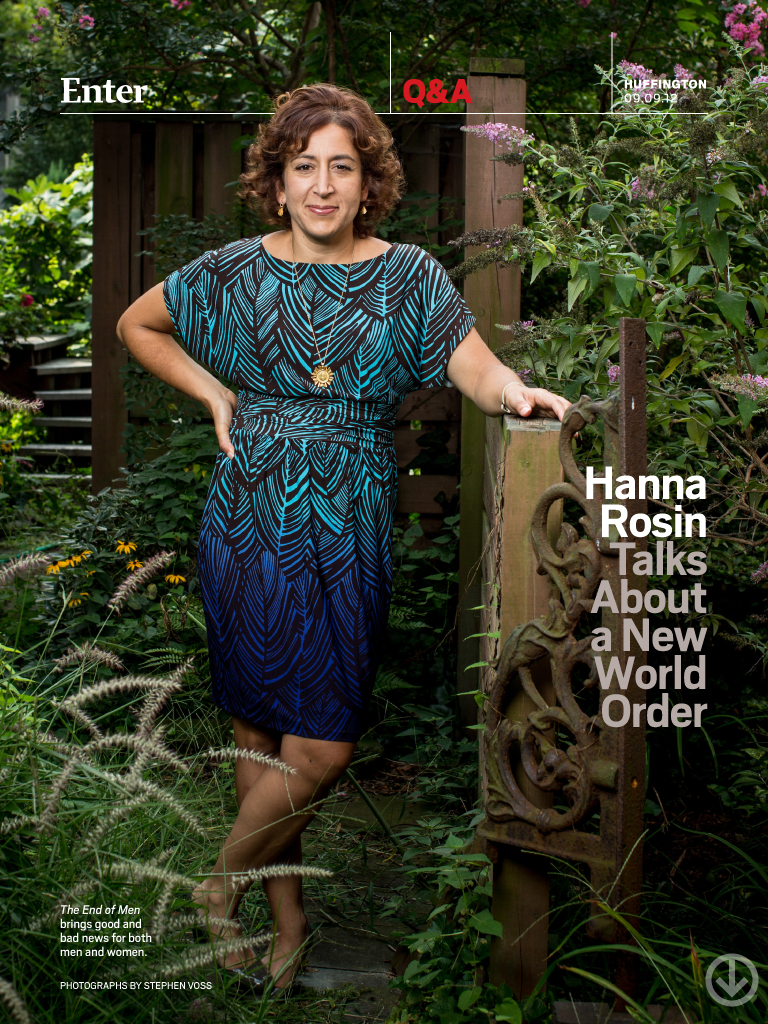 This weekend, Huffington, our online magazine, ran my interview with Hanna Rosin about her new book "The End of Men and the Rise of Women." She had a lot more to say than could fit in that initial Q&A, so here is a longer version of the interview:

Hanna Rosin wants you to know that her 9-year-old son, Jacob, questions the title of her book, too. "He sends me notes that say 'only bullies write books called "The End of Men,"'" Rosin says, ruefully. She's explained to him that she didn't actually choose that title — it was coined by an editor at The Atlantic when Rosin wrote a cover story two years ago about how women are gaining on men in almost everything. But while she tried to think of an alternative when it came time to turn the idea into a book, nothing else seemed to sum up this moment of transition nearly as well. The full title is "The End of Men and the Rise Of Women," and in the book Rosin describes how women now earn the majority of college degrees and hold more than half the jobs in the American workplace. They increasingly earn more than $100,000 a year, regularly out-earning their husbands and, as men have done for generations, are starting to "marry down," if they marry at all. Heck, they are even becoming more violent, or, at least, more comfortable expressing whatever suppressed tendencies toward violence they might have always held. So the title stuck. And the book is dedicated the book to Jacob, "with apologies."

Is it hard, as a woman reading your book, not to take it personally, as in "yay for us women but ouch for our husbands and sons"?

This isn't personal, and it's not like one team won and the other lost. There is really great news in here for women and not so great news. On the good news front, a lot of these are feminist triumphs, reflecting the fact that women have a growing number of opportunities in the workplace as the country becomes more accustomed — not comfortable but at least accustomed — to seeing women in positions of leadership and power. The bad news is that a lot of women in America are now going it alone. They are not finding men who are suitable marriage partners, so they are raising children, working, carrying the whole burden in ways that are exhausting.
At the same time, there is good news and bad news for men. It's obvious where things are bad. Men have been hit hard economically. It was the industries that are defined as "macho" that took the brunt of the economic downturn. But where there could be good is in the changing acceptable roles for men, who have always been hemmed in by narrow social expectations of what men can do and how men can behave. The hope is that now they can, partly out of sheer necessity, move beyond those restrictive roles. It hasn't happened yet — you don't see men incorporating the domestic sphere as part of their identity, at least not as completely as women have incorporated the work sphere. But the opportunity is there.

All the downsides and the unexpected complications — is this a matter of be careful what you wish for?

Yes. Women demanded choice, and now there is an excess of choice. But they are not overwhelmingly happier. Partly that's because even women who make significantly more money than the men they are with never ceded the domestic space. And that can be exhausting. Women don't give up things. They don't give up responsibilities. They add new things. They exhaust themselves and still don't give anything up. And. And. And. And. And they do all these other things at the same time, which can be exhausting. People describe this as a feminist triumph, but it is not entirely.

You have used the word exhausting quite a number of times...

What we need is a new time-use model, too, and we are still working toward that. Take the lives of the women in Silicon Valley who are a model for how to hang on to ambition while taking care of your family. They are making it up as they go along, and the result seems to be an around-the-clock kind of life. They leave at 5:30 and they take care of their kids, but then they are always online for work. It's not a time-use model that works for everybody, but it is critical that such a model exists.

What are these shifts doing to relationships between men and women? I assume men are not entirely pleased?

I think men are going through a transition right now. They don't know how they feel about the changing gender dynamics. On the one hand, men, and especially progressive men, believe in the new world order. They have seen many movies where women are president. They have seen stories praising stay-at-home dads. They know they should support these changes, but they still feel a little queasy about it. And they don't have many role models on TV or in pop culture generally to show them how to inhabit these new roles. Women had Mary Tyler Moore and Murphy Brown. Men are just beginning to have examples they can look to, in real life and in media. The husband in "Up All Night" is one example. He started out as the doltish dad, but in the later episodes the writers relaxed into the character and allowed him to occupy the parental authority in the family. It's not a zero-sum game between his manhood and his parenting. He's a great dad, and his wife still finds him sexy.

So we're seeing a transformation of modern marriage?

College-educated couples have become very conservative of late. Divorce rates have dropped and people describe themselves as happier. I think that's because no one feels trapped. Either partner can be the breadwinner for a while, then they can switch places, so everyone gets a shot — theoretically — at satisfaction.

Non-college-educated women are increasingly choosing not to marry the men around them. They go to school, work, have children by themselves and choose not to support a man whose prospects are not as good as their own. They are not dependent on men, and the men are becoming almost obsolete.

Everything about your book — its title, its vibrant, celebratory cover — says "women are winning." Yet in so many ways we aren't. Why doesn't it necessarily feel like we are?

Partly it's because the latest series of recessions is a struggle for everyone. Everyone feels like they are taking blows all the time over the past few years. But women have shown themselves better at being flexible and fitting themselves into what the available jobs are. In some ways that gives them a few more options. But it's not an easy time.

And partly it's because we are at the tipping point, in a transitional moment. Women are incredibly eager to take over. They do so well in college, and then in their first jobs. But then comes the realization that the stereotypes about women and power still exist. They still get a blowback, still get a reaction to any attempts to exert their dominance. Research shows that when they start climbing past middle management, women hit that wave of suspicion. But in my book I give women pretty specific advice on how to get past that reaction they might get at work. We need to figure out how to get women past that discomfort, how to behave around that.

And the fact that we are still arguing over the right to decisions over our own bodies? Where does that fit into your picture?

To me that feels like a reaction to women pulling ahead. You're right, it does seem so misplaced at this moment, to be having this debate, when so many families now depend on the unfettered freedom of women. It would wreck many American families to go back to a time when most women could not really work because they had no access to birth control and were home raising children full time. But I think that the resurgence of the debate is an idiom of an older age. A fear reaction to what's happening with women. A longing for when it was simpler and a way that will never be again.

Is the fact that there are still so few female Fortune 500 CEOs or members of Congress also a misplaced nostalgia for old times?

Give it time. This is a relatively new. It's a 40- or 50-year-old phenomenon and men have been in power for 40,000 years. This is a generational shift. We're not there yet.