Now that three seasons of “Girls” have passed, it’s safe to say that Hannah Horvath (Lena Dunham) is one of the most disliked characters on television, and that's including all the villains, anti-heroes and sociopaths. In the realm of scripted comedy there are few characters who evoke feelings of revulsion, and who also have as few redeeming qualities as Hannah. (Let’s just say, if you took BuzzFeed’s “Which ‘Girls’ Character Are You” quiz and got Hannah, you definitely weren’t bragging about your results.)

Narcissistic, selfish, insensitive, aggravatingly hypocritical -- Hannah has continually angered viewers and critics with her self-absorbed behavior since the first season of “Girls.” Hannah went so far as to admit that she isn’t really even interested in her friends’ matters, expecting them to drop everything to sympathize with her. Additionally, she’s proven to be nothing but self-involved in her relationship with Adam.

While this season did give a few other characters moments to let their terribleness shine, Hannah continually found herself in situations where she became the most selfish and reprehensible character onscreen. Yet outside of the “Girls” world, and in the larger context of the TV universe, she is far from the first narcissist a television comedy has seen. We need only to look back a few years into HBO’s history to find the character who most resembles, and likely inspired, Hannah.

Larry David played a version of himself in “Curb Your Enthusiasm,” much like Lena Dunham, who plays an exaggerated and incredibly negative version of herself (and people she knows) in “Girls.” These two have much more in common than sharing a comedy series written and created by themselves on the same network. Larry (from here on out we’ll use “Larry” to refer to the character, and “David” to refer to the actor) is essentially the male version of Hannah: both ridiculously selfish, self-loathing, and navigating every aspect of life for his or her own benefit, while disregarding others along the way. It's also pretty (pretty, pretty, pretty) much known that everyone thinks Larry is a complete asshole.

But likening these two characters has been done before; Rob Sheffield called Hannah the “sicko granddaughter of Larry David,” which is a pretty apt, and hilarious statement (although, to be fair, Larry is a bit more of a “sicko” than Hannah). Dunham has even cited “Curb” and David's “Seinfeld” as inspiration for “Girls,” and it’s clear to see the correlations. Yet there is something that many critics are missing when they relate Hannah to Larry because while both may seem alike on the surface, they actually evoke opposite reactions from audiences.

An important thing to note about “Curb Your Enthusiasm” is that it is told with straight humor: what Larry does, says and thinks, all of it -- no matter how horrible or shocking or crude -- is shown through a clear lens of comedy. When we watch “Curb” we expect to see Larry making an ass of himself and, most importantly, we expect to laugh. Yet “Girls” isn’t just a comedy. It has also dealt with some weighty topics (anxiety disorders, drug addiction, death). When we see Hannah act like a complete jerk, and usually in response to a serious subject, it’s not often laughable -- unless were laughing from an uncomfortable place. Take the most obvious similarity between Hannah and Larry: their reaction to death and behavior at funerals.

“The Smiley Face,” Episode 4 of Season 8 of “Curb Yout Enthusiasm,” captures Larry’s complete disregard for others in death and mourning. When his secretary Antoinette’s father is dying, Larry lets her leave work to be with him as he passes (sweet, huh?), but soon realizes he can’t function without a secretary. Unable to deal with the petty problems that consume his daily life (in this episode it’s a fight over a kitchen cabinet), Larry guilts Antoinette into coming back to work for just one day, the same day that her father ends up dying, while she’s at work.

First, he reveals his insensitive nature when he tells his current girlfriend about the death. She empathizes with Antoinette, sharing that her own father passed a couple years ago, but that's way too long ago for an apology. When she questions him for offering no condolences, Larry responds, "Don't you think the sorry window has closed on that?" If anything, Larry sticks to his sympathy expiration dates, like a true jerk. But this is funny, not a moment where we truly hate Larry for his heartlessness.

Later, Larry attends the funeral and approaches a crying Antoinette and her grieving mother with one thing in mind: when is she coming back to work? It’s no surprise that the always-selfish Larry is only thinking about himself when any normal person would put those concerns aside to show appropriate respect at a funeral.

For an instant, you feel a sense of disgust toward Larry for his rudeness, but the scene quickly turns comical as Antoinette’s mother responds with a solution. She immediately offers herself up as Larry’s temp assistant without recognizing his insolence. This moment could have painted Larry as a cruel jerk, but the mother’s reply quickly reminds us that “Curb” is a comedy where we jump between loving and hating the main character -- instead of just hating.

The Hannah Horvath Reaction To Death

Hannah tops all of her previous acts of sheer selfishness in the middle of Season 3 when her editor suddenly dies. Her first response is wondering what will happen with her ebook -- a reaction that appalls Adam. She can’t seem to get past the future of her career to feel even a morsel of sadness (big surprise). When Adam asks Hannah how she'd react if he died, she suggests, rather annoyed, that she'd be "extremely sad."

But her true awful colors show when she attends her editor’s funeral and uses her time with his wife to her own advantage. Just like Larry in “Curb,” Hannah confronts the grieving widow to discuss her own needs, asking if she can connect her with another publisher. But unlike “Curb,” this “Girls” scene isn't laughed off like a silly joke, but ends with the wife feeling appropriately offended and disrespected.

While both Hannah and Larry react similarly in many situations, it's hard to discern what exactly makes their likability differ. The writing of both “Girls” and “Curb” seem to condition the audience to respond to their characters differently: Larry, the funny asshole whose narcissism we judge but still enjoy; Hannah, the self-absorbed, impudent brat we can’t stand. You can find a million reasons to excuse or maybe even half-heartedly sympathize with Larry, but with each season of “Girls” it becomes harder to find reasons to defend Hannah in the slightest.

Do we dislike her so much because she’s a woman and in television we’re hardly used to watching female characters continually act so selfishly? Possibly. And perhaps this is Dunham attempting to bring attention to stereotypes and sexism on television. There's definitely a strong absence of hated average female characters on television (“average” as in non-villain and non-antihero), but there are plenty of men. Consider Louis C.K. on “Louie,” who can be gross and outrageously cynical, but is also incredibly funny. He could probably even walk by an ongoing funeral and piss on the church steps and we’d laugh, because we expect that from a guy like him. 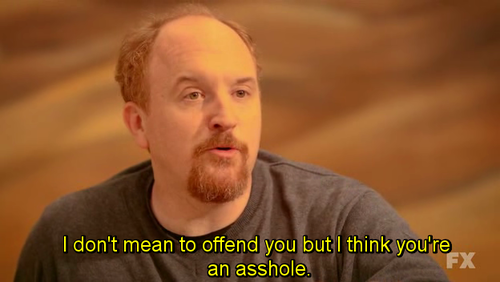 We praise male characters like Louie and Larry for being those unabashedly bold people who live out the darkest, most rebellious parts of ourselves. But when it comes to a young female, is similar bad behavior acceptable? Can women be self-centered jerks and can that be okay? The only other female television characters who somewhat exhibit these undesirable traits are the women of "Broad City," who are bringing stoner-loser females into the light for the first time on the small screen. Still, they're not awful like Hannah.

This isn't necessarily a defense of Hannah, or an attack on David and C.K.'s writing. They (Dunham included) are brilliant writers. It may simply be the context of the series. “Girls” tackles darker issues in a more serious manner than other comedies. Yet it can’t be denied that we respond to Hannah's disagreeable qualities more harshly than her male counterparts, and that may reveal something about our own prejudice and our inability to accept that women can have objectionable traits as well. Television needs more varied female characters. And let's stop making excuses for the men.