In February, a 3,500-year-old Cypress tree nicknamed 'The Senator' burned down in central Florida when a meth user set a blaze to see her drugs better.

A month later, a concert-goer at Ultra Music Festival in Miami was filmed in an apparent drug-induced stupor making out and grinding on a palm tree.

In Essence, a male and female performer dance intimately with an actual charred piece of The Senator while a video collage of bar and party scenes screens behind them.

HuffPost Miami spoke with Bend about what trees, drugs, and culture have to do with one another and what it was like to make art in Miami versus Berlin.

When you heard about the Ultra dancer, did you immediately connect it with the burning of the Senator?

The "drugged" Ultra dancer tried to reunite with nature at a massive event of club culture, whereas the drug addict used the 3,500-year-old tree as a sacred site to consume drugs, which led to the destruction of this epic tree, previously the fifth oldest of the world.

The dancing had something of a modern tribal ritual, covered by mobiles phones and causing an online obsession for millions. Both tried to reconnect with nature, escaping our objectifying culture by using a tree as shelter.

With Essence, are you presenting a larger message about drug culture or society's relationship with nature?

While the “Senator” tree was alive, it remained intact despite hurricanes and lightning storms and was used as a landmark by the Native Americans. From within our excessive materialistic culture we mourn the loss of nature, but are not able to protect it. "It's a poor sort of memory that only works backwards," the Queen says in 'Alice in Wonderland' and in many ways our society doesn't anticipate, just behaves excessively, but with an epic end.

How did you get a piece of the charred Senator tree?

We tend to think everything is just a click away and accessible. For the work 'Reef' in my solo exhibition Eclipse at Charest-Weinberg Gallery, the tires from a failed artificial reef 70 feet underwater were salvaged with many obstacles, and the same goes for this piece. The tree wasn't secured enough while it was alive, but after it's death, thousands of dollars were then spent to build fences around it. The failed Osborne reef was intended to create a vast sealife and later on to attract underwater tourists. It needs millions of dollars to get cleaned up. So these two natural sites are now non-functioning, non-accessible tree and trash cemeteries, which got relocated into an art space.

The connection between the Senator and the Ultra dancer is pretty apparent, but why did you decide to pair these with images from a Miami Beach bar and partygoers?

The videos were shot in the climate-controlled club environment with the party-goers self-documenting their excessive behavior on iPads. Most of them were drunk or drugged. It's like collecting the memory of a mirror, in this case the "essence" of nightlife. The performance shows an act of objectophilia with the tree, causing the viewers to become active spectators.

What was the response to Essence at Situation Range?

There were some catcalls or shouts at the performers, similar to the situation with the "tree-hugger" at Ultra Music Festival. A journalist at the exhibition called it "psychedelic weirdness." It was interesting to see those initial reactions of cynicism calming down as they learned the history of the tree. Cynicism is an easy way to deal with things, but might become "distasteful" here as someone called it.

As a visiting artist from Germany, what strikes you most about Miami?

Miami is a young city with an amalgamation of many cultures. It was mostly created for tourism and seems as though there is a lot of consumerist and club culture, but also has a rich natural and aquatic world close by -- like the Senator tree at the Big Tree Park in nearby Orlando or the vast reefs underwater.

Downtown Miami has the largest concentration of international banks in the U.S. - and just a few blocks away one of the most dangerous neighborhoods in the US. This juxtaposition of artificiality and nature is interesting to explore.

How does the Miami art scene compare with the one you left in Germany?

I have been living in Berlin since 2000 and it has changed in that time, with many international artists moving there, especially in the past 5 years. Right now it has so many different art scenes - and I've even met artists here in Miami who have been in Berlin for ten years and I have never met them there before. I feel like Miami, also just marginally smaller, has a more central art scene. In Berlin it is spread out, but compared to the number of artists to residents, it got like sardines in a tin.

Are you working on any other projects?

My residency at Fountainhead Miami was only from December to January 2012. I'll be a Visiting Artist at LegalArt Miami in early 2013. Currently I'm continuing to work on my photo series up...up...up...up which examines the sky as negative space surrounding civilized sites. There are also a few other projects involving similar topics, but for one I would have to visit landscapes with glaciers, which I'm looking forward to as a refreshment. 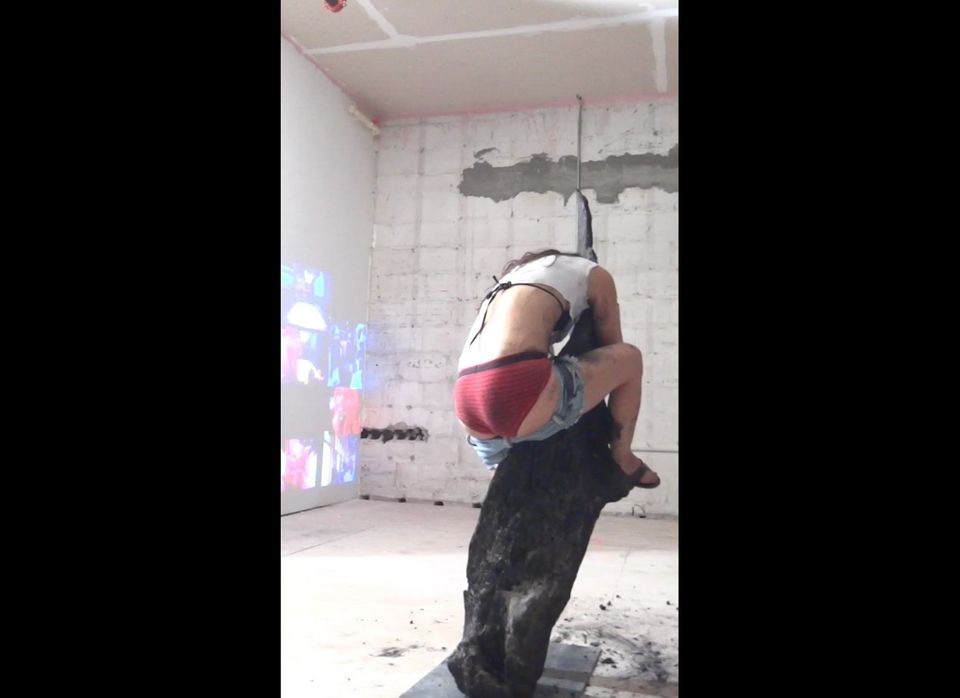