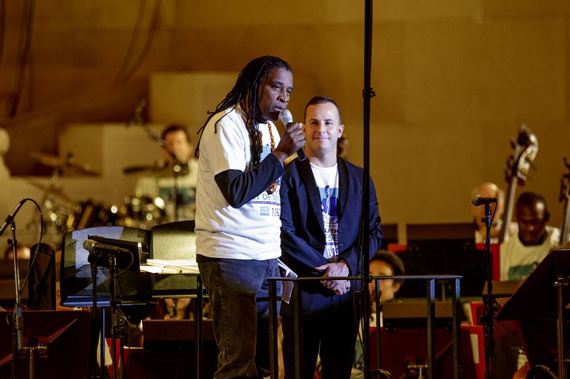 Hannibal Lokumbe is on a first name basis with everyone he meets; he still hails from his home state of Texas, but has toured the world as a virtuoso jazz musician and symphonic composer. This year Hannibal has been in Philly collaborating with The Philadelphia Orchestra and conductor Yannick Nezet Seguin on his full orchestral and choral composition "One Land, One River, One People" which will premiere in Philly this weekend at Verizon Hall in Philly.

For three decades Hannibal was part of the New York scene, performing with fellow jazz giants like Gil Evans, Cecil Taylor and Dizzy Gillespie. His award-winning piece"African Portraits" was commissioned by the American Composers Orchestra in 1990 and he has since composed works for many symphonic and chamber orchestras. The composer sees no musical divides between classical and jazz worlds.

In an interview backstage at Verizon Hall, Hannibal commented that 'One Land' was particularly special for him "at this time with this orchestra with this conductor, who has what I call the Bernstein mind. The borderless mind. For me that is what music has always been. "

With the Philadelphia Orchestra musicians, Hannibal said he has had "a longstanding love affair, and it's always a learning experience, they always teaching me. I need a three year residency here," Hannibal half-jokes. He calls Nezet - Seguin 'maestro Yan' "When I first gave him the completed score, he said he was going to take my score home first and meditate on it, he didn't just say 'I'm going to study it'."

The composer reminds that he doesn't write conventional 'movements' "I write veils. When a veil is lifted, there is certain consciousness, a permanent truth," He doesn't call the composition an oratorio either, but rather a 'spiritatorio' that will be sung by members of the Delaware State University Choir, The Lincoln University Concert Choir and Morgan State University Choir will be performing in the piece with soprano Laquita Mitchell and tenor Rodrick Dixon. He calls the combined choirs for 'One Land' a "spiritual tsunami."

The metaphysical aspects of the piece reflect on a perilous and troubled world. His description for the piece "One Land (the physicality of humanity) one river (the blood) one people (the spirituality). " The creative trigger for Hannibal for this large work expresses his ecumenical view and personal history to fuse "A universal musical truth," he explained, some of the 'veils' revealing themes Hannibal said was for him to see "the depth of my flaws."

"We don't just evolve physically, we also evolve spiritually- he sites people like Dalai Lama, Albert Einstein and Rosa Parks, to the composer they are visionaries "of the other part of evolution that has to do with our spirits, how we think, how we live and that's what fascinates me most of all... and in the piece I refer to it as 'the new being' who has no need to create god or devil to worship," as he clutches his chest and asserts "It's all in here."

The composer refuses to categorize his music or see any difference between classical music and jazz. "There are a lot of new musical elements to this piece and one is called 'The Blugue, which is a fugue based on the blues- that opens the 2nd Veil- it's just the strings baby," he noted. And those strings are a large part of what defined the orchestra's famed ' sound.' He fused " A heavy influence of Bach and Lightning Hopkins. A combination of what I heard Bach play and I played myself with Lightnin' Hopkins and T.Bone Walker."

During the development of the 'One Land..' Hannibal has not been behind doors rehearsing the piece, but has engaged in a slate of community outreach programs in community schools and civic organizations including performances at St. Francis de Sales School and Creative Arts Morgan Village Academy, Camden.

He will also talk about the creation of 'One Land...' with Nezet-Seguin at a panel discussion in the Free Library of Philadelphia. He performed for inmates at an area prison along with a string quartet from the Philadelphia Orchestra. Hannibal musical mission goes beyond the concert hall. "You've got to make the time for some things," he said.

Hannibal was a premier trumpeter who toured the world for many years and performing with jazz greats, switching to composing because the heavy demands of the road kept him away from his family.

He touches briefly on his touring career and remembers seeing Louis Armstrong. "I think so much now about the analogy of the ...reverence with which Leonard Bernstein treated Louis Armstrong at that concert. I remember how much that did for me, as a musician, to see that. I'm now thinking about what this work means with a young phenom maestro Yan, this orchestra and what this work inspires in me is a powerful combination."