Born in Vienna, Austria in 1920, my father developed an interest in the supernatural when his uncle Henry told him stories about ghosts and fairies. For him it was the beginning of what would be his destiny and chosen path for his life span.

Just 40 plus years earlier, some researchers were on the way to forming this path father would soon travel upon. He studied such languages as Japanese at Columbia University, earning a Master's Degree in comparative religion and a doctorate in Parapsychology at the London College of Applied Science which is no longer standing. He studied his predecessors before him doing early psychical research as the word parapsychology was born around 1889 by a philosopher named Max Dessoir. J.B. Rhine in the 1930s made it known as psychical research. Parapsychologists utilize many approaches for the study of apparent paranormal phenomena. Father ran the gamut of his physical research who unlike many of his predecessors and those few after him... studied most paranormal phenomena.

According to the Parapsychological Association, parapsychologists do not nor are they concerned with astrology, UFOs, Bigfoot, paganism, vampires, alchemy, or witchcraft. Father was, which makes him a very unique, highly-intelligent character to be born into our world. For that reason and reason alone, he was a bit of everything to the world when it came to the supernatural. Sadly, he is more remembered for the Amityville Horror case then his bountiful case work at hand dealing with thousands of stories with the wide range of topics I just mentioned.

Journalist Sean Casteel asked father in an interview if father had seen the movie Phenomenon with John Travolta? To which father replied, "That is a piece of Scientology propaganda. I know the producer, a nice lady, very well. But I'm appalled at this film. The first two-thirds of it are pretty good, then we have this idiotic ending. I was at the screening before it opened. The ending is stupid because nobody has that kind of ability due to brain cancer. It's just stupid. But then I understood where he's coming from. The New York Times pointed out, side by side, some of the lines from that film are lines from the L. Ron Hubbard so-called Bible of Scientology. I don't know if you're aware of it, but there's an active movement in this country to have these people outlawed, and they have been in many other countries. They're a dangerous bunch. Unfortunately for Hollywood actors like John Travolta and who else? What's his name? The vampire guy?" Gotta love him!

We had many tarot card decks in our home as well as Zener cards for telepathic communication which he had on-going with clients and friends. Ever thing he did was a teaching moment in which those around him would walk away knowing something new. As a father, he was loving, always doting concerned whether or not I had eaten enough and a "what else did I require" attitude. Before I was a supernatural twinkle in his deep, blue greying eyes, he was teaching and speaking foreign languages. He learned as much as he could as a courtesy to when he traveled abroad for work. He felt it was a must to learn one's culture that differed from your own as a form of high respect. This was one of his many special qualities when dealing with the public. He was the least pretentious man I ever knew. As a father, he was the most nurturing man I ever knew. He was the one who held my hand as we crossed Manhattan's busy, bustling beeping streets to get to the 'other side.' Yes, pun intended.

I recall the phone ringing and he picking it up to answer saying, "moshi-moshi." I thought, "Wow that is the weirdest thing to say when picking up the phone!" I questioned him at the rip old age of eight, and he said to me peering down over my little, black-haired head... that he was expecting a call from Japan and that is how you start a telephone call. I knew then more and more I was fascinated with his every movement in that apartment watching and listening into his conversations and meetings at hand. The phone rang day and night but on a strict schedule as he would often bark at those calling at the "wrong time." My father was the sweetest man who loved the world and nature. His veganism spoke loudly to all and his passion to convert others into understanding why that lifestyle choice... was insurmountable and unrelenting. It took me a long time to grasp that natural concept and apply it into my daily life. As an academic parapsychologist, he took his calling extremely seriously. Hence where I think his jokes were a bit dry but he insisted he was indeed funny. Three "dirty words" in his vocabulary were: belief, disbelief and supernatural. "Belief is the uncritical acceptance of something you can't prove," he explained. "I work on evidence." He therefore dismissed the existence of angels and regarded the world's religions as corporations that make large profits out of scaring the "hell" out of their followers. 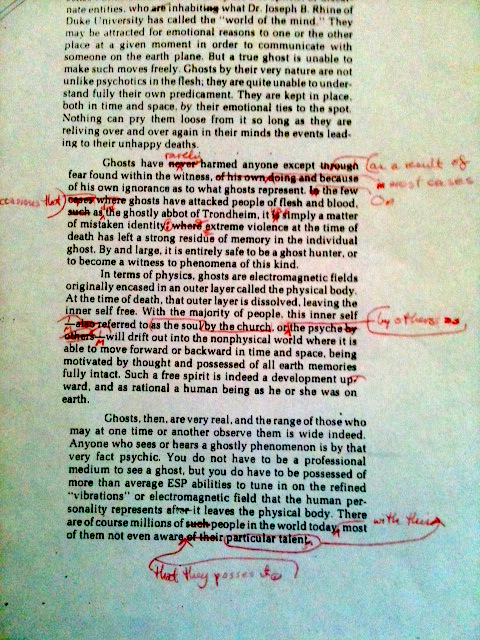 Yes, he was firm in his belief in ghosts (people who do not realize that they are dead and are therefore "confused as to their real status"), and was convinced that extraterrestrials are abducting human beings to learn about life on earth. That yields the theories of the Men In Black (not just a film) and half-breeds to name just a few. Ghosts were, according to him, imprints left in the environment which could be "picked up" by sensitive people, such as myself. Spirits were intelligent beings who could interact with the living; while "stay behinds" were those who found themselves earth-bound after death. He also believed in reincarnation and the existence of "levels of consciousness". The man behind the ghosts was full of a life many of us simply cannot begin to imagine or comprehend. He was above many and perhaps knowing so made him a bit quirky and often misunderstood at times.

Moving on towards his inner creative-self, his love for the theater led him to become the New York Drama Critic for the London Times in the 1950s. He subsequently became a member of ASCAP, SAG, AFTRA and the Authors Guild. Who else out there could have such a resume and still be so in-touch with our universal codes and purpose? He would play piano with lyrics and notes he composed for me which in turn got me interested in playing the piano. That brought us much joy over the years. It was when mother began playing her folk guitar, and very well she played, that the singing kicked in and I left! There was only so much 'musical Holzer talent' I could endure. It was at this time, his first comedic play "Hotel Excelsior" was appearing off Broadway, the first of many to follow including "The Way You Kissed Last Night" and "Laugh It Up." Lyrics and musical scores followed for "Lysistrata" and "Mister Broadway." Lysistrata, based on Aristophanes' comedy, is now in pre-production and had table reads and auditions already and is back from the dead. Seeped in tradition dating from 17th Century England, father was the Producer/Director of the infamous New York City "Kit Kat Club" which hosted the Artists and Model Ball of the '60s. There he met my mother.

Father was comfortable in all worlds he explored, having appeared on over 250 hundred national, local as well as foreign television and radio programs. He was a regular on television talk shows and even hosted his own show, Ghost Hunter. He has been credited with creating the term "The Other Side" (already in use, however, in nineteenth century spiritualism) or in full "The Other Side of Life." He is also sometimes credited with having coined the term "ghost hunter," which was the title of his first book on the paranormal, published in 1963. I hope many reading this will now comprehend who came first, the chicken or the egg controversy. However, it would be made of soy and tofu. 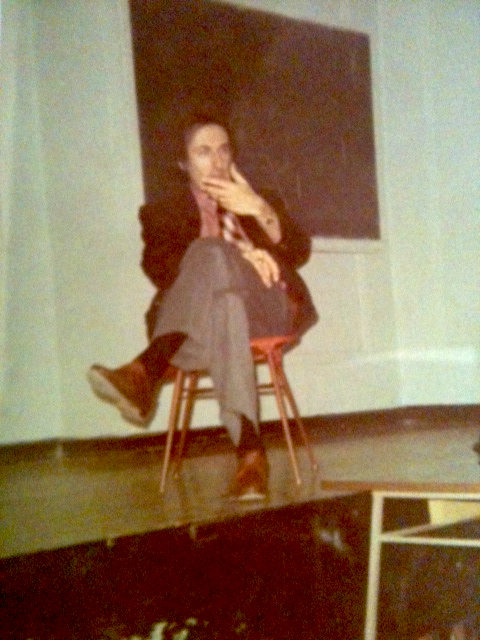 In 1966, after airing a television special, "Eye on New York," which featured father, CBS TV affectionately became known as "CBSeance." The show garnered the highest ARB rating(s) ever, for any series segment of that time. Father was not your ordinary, run-of-the mill persona from what we have been seeing since the next reality show surge hit airwaves in the early 2000's. No. He did it all and was a man cut from his own cloth that could never be replicated again. His materials are used and some even go as so far as to claim it their own but if you do your homework, my students, you will soon learn who said what and who did what before. Today, and for the past several years anyone claims their titles in this field the way land was claimed in the west and off they go either getting lucky responding to a casting call or today, filming themselves as You Tube sensations are everywhere and you too, if you act now... can become a filmmaker/paranormalist... sort of.

The respect, validation, credibility and uniqueness has gone out the window and out to pasture as a result of this next generation upsurge. While many believe what's on the tele is what it is all about and lending credibility to those personas because, "Hey, their on TV," then I have much to teach yet. That's fine because history gets forgotten and often times replenished... by folks such as myself and others who are passionate as well, who are here to stay, make noise, leave lasting impressions and trend what has not been shown before. I did say, I am a woman in this field... right? Okay just checking.

Father works with me from the other side in any environment and it is a wacky, odd-ball feeling as in life he was very self-absorbed into his own world of the unknown. I am excited yet at the same time it is a paradoxical moment nervous as to what he has been teaching and showing me. The man behind the ghosts continues his journey educating not just myself but those assigned to his next calling. Buckle up, The Holzer Method lives on and the ride has taken off. Keep your hands and feet to the side and do not touch anything you do not recognize. It can get ugly out there but remember and ask yourself, "What is real and what is not real? Because a lot of it is not real. A lot of it is questionable. And we've got to somehow try to separate those things."

A poignant, great hip-shooting interview of father, can be found here.