Hanukkah celebrations around the world:

PHOTO GALLERY
Hanukkah Lights From Around The World

The Festival of Lights, an eight-day celebration, marks the rededication of the Second Temple in Jerusalem in the second century B.C.E. during the Maccabean revolt against oppressive Greek rulers. It is one of the most widely observed Jewish holidays -- perhaps due to its proximity to Christmas on the Gregorian calendar -- and is celebrated by lighting a nine-branch candelabrum commonly called a menorah. (Technically, the candelabrum is called a hanukkiah to distinguish itself from the seven-branch menorah used in the Temple.)

The story of Hanukkah is one of revolution and miracles: Greek influence over the Jews in the Land of Israel was getting out of hand. Hellenism was spreading, an affront to Jewish culture and religious practice. When the Greek ruler of the time, Antiochus, forbade Jewish religious practice, a small group of Jews, the Maccabees, revolted. The Maccabees were successful and, as a first order of business, restored the desecrated Holy Temple. The menorah in the Temple needed to be lit. Traditionally, the candelabrum burned continuously. The Temple liberators searched high and low but could find only one vial of olive oil, which seemed to be enough for just one day. Miraculously, the oil lasted for eight days, which was just enough time to receive a new shipment. To celebrate the miracle, Hanukkah was instituted.

Today, Jews everywhere light menorahs on each night of Hanukkah. Traditionally, one candle or flame is lit for each night until the eighth night, when all eight lights shine together. The menorah has a ninth "helper" flame -- known as the shamash -- used to light the other candles. This is necessary because in Jewish law the Hanukkah lights serve no other purpose than declaring the miracle of the holiday. Jews place the lit menorah in a prominent window in order to fulfill this commandment.

Gift giving is now a common practice on Hanukkah, and it is therefore a beloved time for Jewish children. Fried potato pancakes (latkes) and doughnuts (sufganiyot) are traditional fare, and a spinning top (dreidel) with four Hebrew letters has become synonymous with the holiday. The letters -- nun, gimel, hei, shin -- form an acronym for the message of Hanukkah: A great miracle happened there. 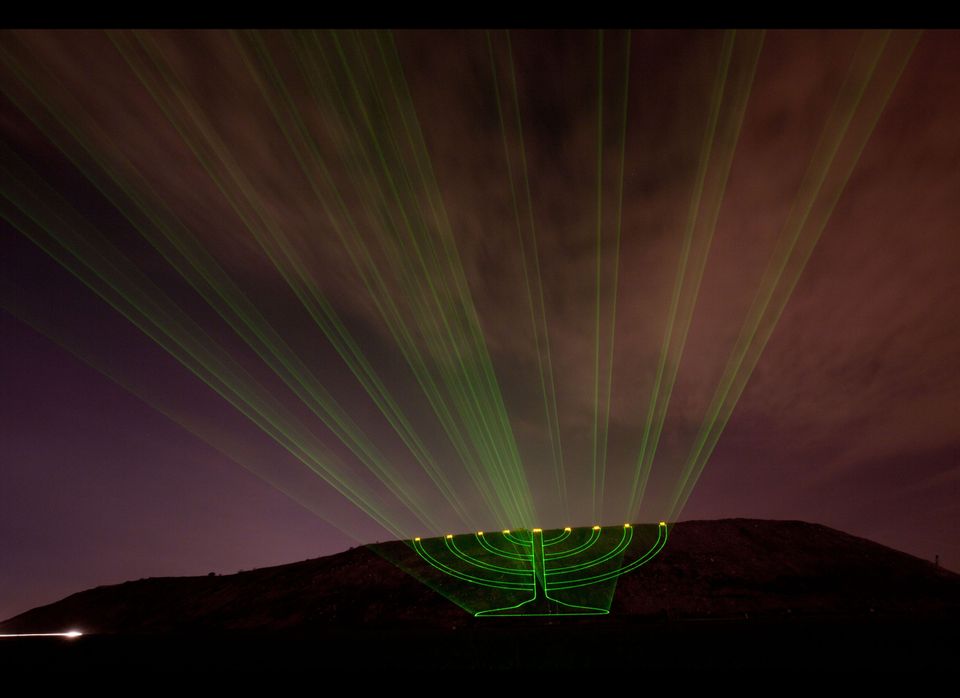 1 / 19
Tel Aviv
Laser beams creating the image of a large lit Hanukkah menorah are projected on the Hiriya landfill, a former waste disposal site, now called the Ariel Sharon Park, near Tel Aviv, Israel, on the second eve of Hanukkah, Wednesday, Dec. 21, 2011. The Jewish festival of light, an eight-day commemoration of the Jewish uprising in the second century B.C. against the Greek-Syrian kingdom, which had tried to put statues of Greek gods in the Jewish Temple in Jerusalem, started Tuesday.
AP Photo/Ariel Schalit