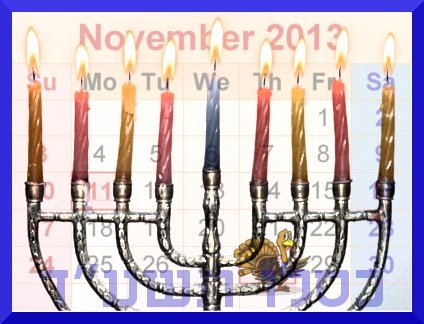 This month, Hanukkah and Thanksgiving will overlap for a joint celebration that will never happen again. Here's why. (Try to keep up with me on this.)

Thanksgiving is the 4th Thursday in November. Hanukkah is the 25th day of the Jewish month of Kislev.

The reason for the broad range of possible dates is that the Jewish calendar is lunar-solar. The months are based on the cycles of the moon. But the calendar changes the lengths of those months, and even how many months are in a year, to make sure that Passover always falls in the spring. This complex system — put in place by Rav Shmuel in the first half of the first millennium CE — ensures that the Jewish date and the secular date match up every 19 years. (By contrast, the Muslim calendar is purely lunar, which is why Ramadan can fall during any time of the solar year. The Christian religious calendar is almost entirely solar, but Easter falls on the first Sunday after the first full moon after the spring equinox [around March 21], a calculation that involves the moon as well as the sun.)

Because of this Jewish 19-year cycle, 19 years from now, in the year 2032, Hanukkah will again fall on November 28. But Thanksgiving in that year falls three days earlier, on the 25th.

On average, we would expect the 19-year Jewish cycle and the 7-year Thanksgiving-on-November-28 cycle to coincide about every 19x7 years, which is to say, approximately every 133 years. And they sort of do.

One-hundred and fifty-two years ago, in 1861, the first day of Hanukkah and the 4th Thursday in November were both on November 28th. But there was no Thanksgiving back then.

If you you've been paying attention (and if you haven't given up yet), you may have noticed that I said "currently" when I explained when Kislev can begin. Remember Shmuel, who fixed the details of our current Jewish calendar in the first place? He, like everyone else back then, though that the year was 365.25 days long. This is why we have a usual year of 365 days, but every 4th year we add a leap day in February to make 366.

Pope Gregory fixed the problem in two ways. First, he lopped off 10 days from the calendar. For Catholics, the day after Thursday, October 4, 1582 was Friday, October 15, 1582. Secondly, he eliminated 3 leap days every four hundred years. He decreed that years divisible by 4 would still be leap years, unless they were also divisible by 100 but not by 400. So 1600 would be a leap year (divisible by 100 and by 400), but 1700 would not (divisible by 100 and not by 400). This became known as the Gregorian calendar, and it gradually spread through the Christian world.

This is why (remember the question from several paragraphs ago?) in the year 2165, when we'd expect Thanksgiving and Hanukkah to coincide again, Hanukkah will actually be one day later.

And that is why Thanksgiving and Hanukkah will never again coincide.

Well, almost never. If the Jews don't ever abandon the calculations based on the Shmuelian calendar, Hanukkah will keep getting later and later — moving through winter, then into spring, summer, and finally back into fall — so that tens of thousands of years from now they will again coincide. But long before then the springtime holiday of Passover will have moved deep into summer, so be on the lookout for a memo with a calendar update in the next several thousand years.

And in the meantime, don't miss this opportunity to enjoy an exceedingly rare confluence of celebrations.

Religion News Hanukkah Chanukah Thanksgiving Calendar
This Blogger's Books and Other Items from...

The Bible Doesn't Say That: 40 Biblical Mistranslations, Misconceptions, and Other Misunderstandings
by Joel M. Hoffman 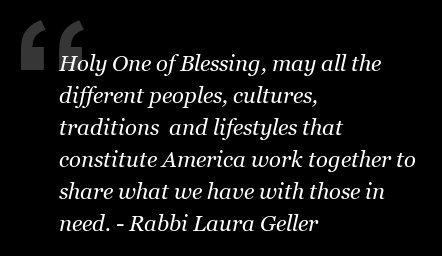