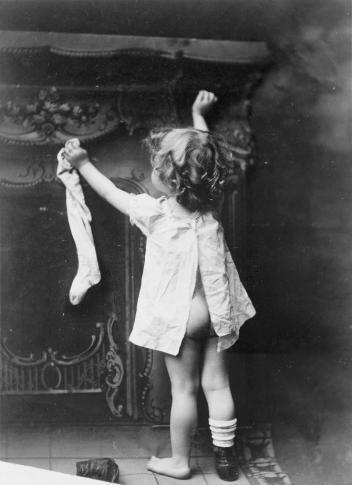 When I was little, I wanted Christmas. I didn't care that Hanukkah was eight days long, since I only got one present. People never talked about Hanukkah. Everything out there in the world was Christmas, Christmas, Christmas. The stores were all filled with trees and lights, Santas were on every corner ringing bells, my elementary school had Christmas decorations and we sang Christmas songs. I can still sing two entire Christmas carols in Spanish, just in case anyone is interested. Christmas was the Big Kahuna, the Whole Ball of Wax.

My parents had tried, even before I started school, to nip my desire in the bud. When I was three, my mother told me there was no such thing as Santa Claus. I was undaunted. Each year I waited for Santa to discover me. One year, I took a knee sock and hung it from the light switch near the front door. The next morning, the sock was there, hanging limply like an, uh, empty sock. Even a piece of coal would have been better than nothing. For the next 10 years, I lusted after Christmas in my heart, even as I sang "Oh Dreidel, Dreidel, Dreidel," in my temple Sunday School.

I was finally rewarded when I became seriously involved with Ron, a strawberry blond Methodist who would become my first husband. Finally, I could lay claim to the wonders of the holiday. The first Christmas I spent at my future in-laws' house, I helped decorate the tree, swooned over the carolers who strolled through the neighborhood, attended the special Christmas Eve midnight service at the church. That night, I didn't sleep for even a minute. I lay in bed like a five-year old, in a state of giddy excitement. At dawn, I jumped out of bed and snuck downstairs. I thought I was the luckiest Jew in the world. I had both bases covered.

Christmas Day was beyond my wildest imagination. Boxes and boxes of presents. A big stocking just for me, filled with chocolate, which I consumed before breakfast was served. A day of food, presents, visitors, more presents, more food. This was what life was meant to be.

At the end of the day, Ron borrowed his mother's car to drive me home. It was late Christmas Day evening. The roads were deserted. We took the East River Drive in Philadelphia, a beautiful road, similar to Rock Creek Parkway in DC. I sat in the passenger seat in a post-Christmas overstuffed swoon, completely at peace.

We turned a curve, and I watched Ron turn the steering wheel. I noted that the wheel was especially easy to turn since it was no longer attached to the steering column. Ron noticed the same thing as I did, because his response was to look over at me and scream "Holy Shit!" While we skidded sideways across the Parkway, he never did let go of the wheel, apparently hoping that it might decide to miraculously reattach itself.

The car finally came to rest when it climbed a little bit up the embankment on the far side. We scrambled out of the car and off the road. I'm sure Ron took the steering wheel with him. Eventually, the Parkway Police found us, kicked the tires to get the car half way up the embankment and out of traffic, then gave us a ride back to Ron's house. Had there been the usual traffic on the road then, I'd be writing this post from the Great Bloggers Beyond.

I did eventually get home that evening, although it was well past midnight, and I felt like my Christmas bubble had burst. In retrospect, I'm not sure if the experience was due to divine disappointment for my temporarily switching allegiance from the religion of my forefathers, or just a slight oversight by the mechanic when my future mother-in-law had her car inspected.

I've since learned to celebrate Hanukkah in a way that leaves me with no feeling of deprivation. And, of course, Christmas is still magical. For this reason, when my daughter lived in London, I sent my baby grandson eight Hanukkah presents. Then I sent him a Santa outfit. But I sent the Hanukkah gifts first. I don't need to be taught any more lessons.