Grocery stores are jammed with people planning for July 4th. Packages of hot dogs, chicken and steaks are piled into carts. People chat. "I've got 36 people coming, and they love to eat!" a bulky woman behind me explains as I eye her cart.

Burgers, hot dogs, barbecued chicken, egg salad, and other July 4th favorites might taste delicious. But they are also products of intensive confinement and systemic torture. To put it bluntly, on July 4, we torture many species as we celebrate one species' freedom.

Lots of folks know that a plant-based diet is an excellent choice for our health and a great way to combat global warming. But that's not the purpose of this post. Rather, I'd like to introduce three of my friends--animals who, but for luck, would have been confined, yanked in the air by one leg, slit open, skinned, and cut up into parts to put on plates. But for luck, they could have been the ones in your shopping carts at Whole Foods, Walmart, Safeway, or Kroger as you prepared for this July 4.

Inside the pig barn, young Dylan asks about the spots on Franklin's side. "What's that gooey pink stuff?" he wants to know. Dylan is among over 150 school children who've visited CAS these last weeks in June. I explain that Franklin is an older pig who has lived at CAS since he was a four-pound runt (spared from having his skull crushed, a common practice of the industry--I leave out that detail.) Franklin has just had cancerous tumors removed.

"It's medicine," I explain. "Franklin had an operation."

While Franklin is recovering from cancer surgery in a deeply-bedded stall, his porcine pal Nadine grunts gleefully as one child after the next stretches out on top of her as if she's a sofa. Meanwhile, millions of pigs just like them--with distinct personalities, fierce intelligence, an emotional range identical to humans'--either spend their entire lives in metal "gestation" crates just a few inches wider than their bodies or are separated from mom and live short lives filled with pain, suffering, and confinement. 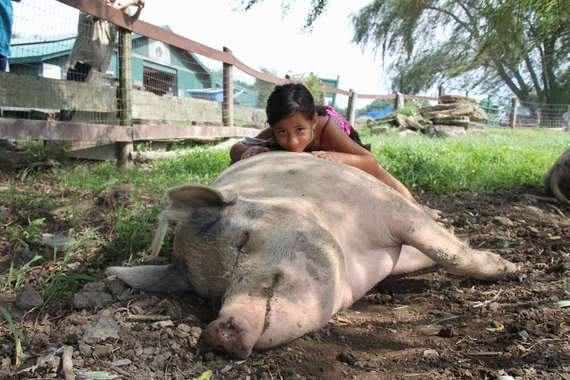 Nadine the pig loves when children give her big hugs!

Back on our tour, Emmett the rooster is falling asleep in a young child's arms. As a beaming boy holds Emmett, a few children give Emmett a neck massage. He blinks slowly and rapidly opens and shuts his beak--both signs of rooster rapture.

"He likes it!" a little one observes.

"This is kind of a happily ever after place," one insightful child says, a big grin plastered across her face. 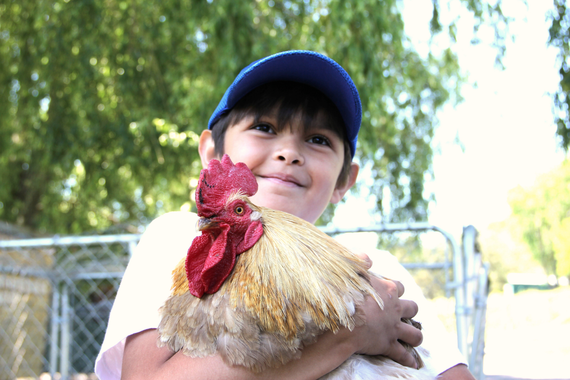 Emmett the rooster enjoys being the center of attention.

Yes... Emmett is one of the fortunate few. The egg industry grinds up newborn male chicks shortly after birth. Hens are shipped to laying factories and stuffed into "battery cages" with as many as ten birds. They spend their entire short lives in these tiny wire cages. Like mother pigs, their lives are short--under two years--because they're useless to the industry as soon as their egg production tapers off. The chicken meat industry, responsible for over 8 billion deaths annually in the U.S. alone, is no better.

I show the children a battery cage. A parent chaperone asks her child: "Does that look like a happily ever after life?"

"No," says the little girl. "It looks really, really sad." 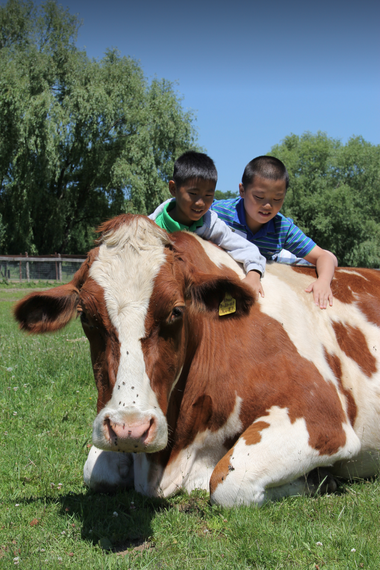 Tucker the cow is so gentle that when he's lying in the pasture, I occasionally take young visitors out to meet him.

How lucky I am to be able to publish articles and make speeches that challenge the status quo. I think about this freedom every July 4. But I think about something else as well: if you were lucky enough to know an Emmett or a Franklin, lucky enough to hold a big old cow's head in your hands as he bathed you in scratchy kisses, lucky enough to understand that ten chickens are as individual as ten humans, I believe you might begin to sound a lot like I do. And I believe that instead of piling your grocery cart full of the body parts of animals, you'd be piling it with meat substitutes like tempeh and seitan, and with fruits, and vegetables, and grains.

I hope you'll consider what I've said, and that you'll join me in a new kind of celebration this July 4.

There's no need to put away the charcoal, by the way. Go ahead and fire up the BBQ! Veggie dogs have come a long way over the years, and there are scores of recipes for great veggie burgers. For your potato salad, Vegenaise is indistinguishable from mayo. Check out our very own Chef Linda's vegan recipes, too.

Happy 4th from Emmett, Franklin, and the rest of us at Catskill Animal Sanctuary. 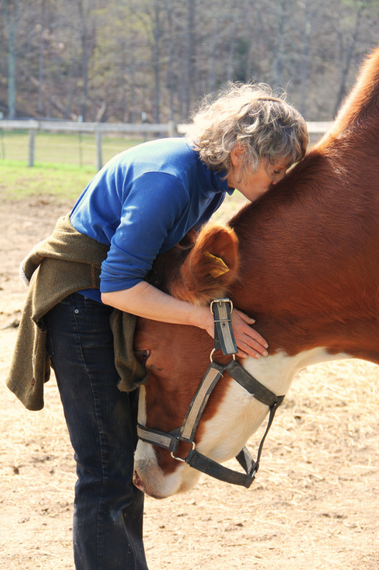 At 2,500 pounds, Tucker could easily trample a man and kill him. But he only wants love.