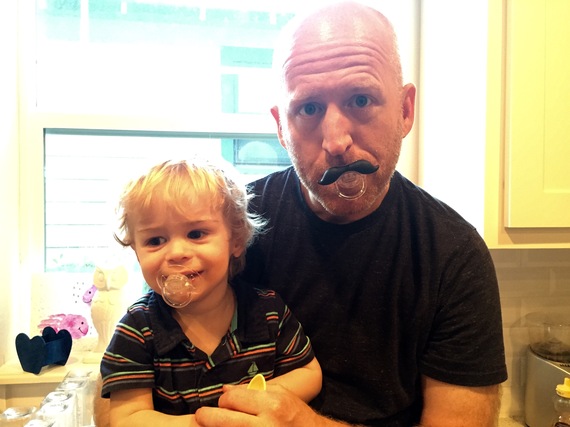 There it was on the screen. The heading read, New Study Shows Parents of Young Children Are Unhappy or some such nonsense. Now, I like to consider myself a temperate fellow. I have, after all, maintained the bulk of my sanity (I think) through the domestic gauntlet of the past several years. I'll admit, though, when I read this it took everything I had not to chuck my laptop through my bedroom window and then start eating the broken pieces in a psychotic act of protest. Really? Really?! I don't even know where to start...

First of all, if there has ever been a more apparently obvious journalistic entry I cannot imagine what it would be. "Scientific Research Suggests Weight Training Linked to Soreness" or "I'm A Little Winded: Interview With Marathoner At Mile Seventeen." Of course I'm "unhappy." I barely ever have any free time. I live in a state of almost constant sleep deprivation (mostly because I'm up late trying to steal back the free time). The level and cacophonous nature of the noise to which I am daily subjected is typically reserved only for Guantanamo residents. Interrogations- just the same. Most weeks my marriage feels like a game of Super Mario Bros. wherein I play the role of Mario, the kids all play Bowser, and even when I do manage to vanquish their nefarious efforts to tear us apart, the princess is always in another castle. Usually, already asleep. All of that coupled with the fact that Time has apparently started moving at roughly 11,743 times its normal rate, bringing on the rapid deterioration of what little faculties I still possess. So yea, it's a real carnival.

Second, I'm all for the advancement of scientific research, but are we seriously contending that something like "happiness" is privy to such quantification? This is a direct quote from the study: "On average, new parenthood led to a 1.4 unit drop in happiness. That's considered very severe." For perspective, the study goes on to compare this plummet to other negative life events, demonstrating how the ironically dubbed "bundle of joy" is considerably worse than losing your job, the death of a partner, or divorce (which registered a whopping "0.6 happiness unit drop.") Look, I don't consider myself a luddite. I'm not one of those folks who rails against the dangers of technology or gets overly concerned about the triumphant march of Science in our times. But, a "happiness unit"? The whole idea makes me quingigaflexotic with rage. I'll bet more than 0.6 anger units.

I know I'm being glib (and a bit silly) about it. I'm sure the research was done in earnest and I have no reason to doubt its findings. Getting better information about what people are experiencing at different intervals of life is useful, maybe even compassionate. Perhaps even some found it liberating to hear their experience normalized like that. That's good. However, the problem with approaching happiness in this way is: whatever rubric was constructed to yield the "funny" numbers mentioned above would have to include readily identifiable features of the subjects' experiences that could then be weighed against their general happiness. It likely would have included items such as:

If you have children, you're now chuckling knowingly at how seemingly custom made this list is-how it preys on exactly the areas that are most impacted in the beginning years of parenting. But, that's not really the issue. Here's the thing: I have experienced a deficit in every single one of these areas (and many more) over the course of the last six years, bringing up three children through toddler stage in that span. If someone asked me, "Are there any offsetting benefits of being a parent that mitigate or overwhelm these losses?" and then asked me to use the same type of rubric to counterbalance the debits, I know I couldn't do it...

... because the depth, height, and breadth of the joyful moments in parenting are, literally, incalculable. They aren't able to be leveraged against their prickly counterparts any more than a man is able to tell you how many 12's there are in a rainbow. What happened to me today-what wild thing burgeoned in my soul- as my little man walked so proudly up to his new classroom with his lunchbox in hand... its proper name is 'ethereal' and hence cannot be measured. Moments like these don't "offset" the difficulties of our vocation. They don't rend them infinitesimal.

The broader point, whether you're a parent or not, is to challenge this definition of "happiness" that is quickly seeping into the water table of our generation. Levity, leisure, and long money are bandied as vital for our good pleasure. You'll even hear a parent say, "So long as my kid is happy, that's all that matters." But, what if we forget about the spiritual nature of sorrow and struggle in our quest to continually keep happiness, both ours and our kids', "in the black"?

I don't want just a happy life. I want a thunderous, rollicking, expansive Life! But, that attempt to soar into greatness will at some point bring me crashing headlong into my limitations and flailings. It will necessitate the painstaking development of character, the humility of work, and the breaking of my will against itself.

I'll take meaning over happiness any day. For me, and for them.