In the famous 75-year long Harvard Grant Study, it is revealed that the essence of a fulfilling life is about love instead of money, power or achievement. This stunning result has triggered my further thinking towards the happiness level of a nation. What if the numerous numbers, ratios and indicators of economy that we carefully measure and monitor are not as important as we previously considered?

In microeconomic theory, there will be decreasing marginal utility of consumption as well as wealth for an individual. Nevertheless, I argue that there will not be decreasing marginal utility of happiness or satisfaction level. Therefore, I further propose that the happiness level of a nation is not all about economic growth. Besides economic growth, the average national subjective well-being or the happiness level of each individual is another pertinent issue to be considered by politicians and economic decision makers.

Compared with utility, happiness is a more pertinent and subtle measure of satisfaction derived from utility. Therefore, from my perspective, the happiness levels of each individual as well as of a nation are alternatives to economic growth. Though contingent on social economic progress, happiness level or well-being is not a mere function of aggregate economic growth.

I. The Economics of Happiness: Study on Average National Subjective Well-being
Yearly data of 121 countries were used for the regression model. The dependent variable is Life Ladder, which is a measure of subjective well-being (SWB). The Cantril ladder questions consist of questions on the quality of lives and the choices range from 0 to 10 (World Happiness Report 2015). The SWB is measured based on survey method in the Gallup World Poll (GWP), as of December 26, 2014. The dependent variables are chosen according to economic intuition and with reference to World Happiness Report 2015.

It could be inferred that people might react to the benefits and welfare resulting from higher GDP per capita of the country. Hence, money alone might not add to more happiness; rather it is the well-functioning government system, better health care, enhanced social support and decreasing unemployment rate that determine the happiness level.

II. Happiness is not only a Concept for Individual but also for a Nation
According to Figure 1, determinants of happiness in most countries cluster in the bundle. Nevertheless, there exist several outliers, potential reasons of which include war, extreme poverty and inefficient government.

As the famous quote from Anna Karenina written by Leo Tolstoy, "Happy families are all alike; every unhappy family is unhappy in its own way." Economic growth is an important component of happiness level but definitely not a universal remedy for unhappiness. Though economic policies of each country are different, well-being of her people is an indispensable component to be considered. Therefore, it can be concluded that there exists idiosyncratic components in the happiness level whereas there is always a different reason for departing from happiness, which holds true for the national level. 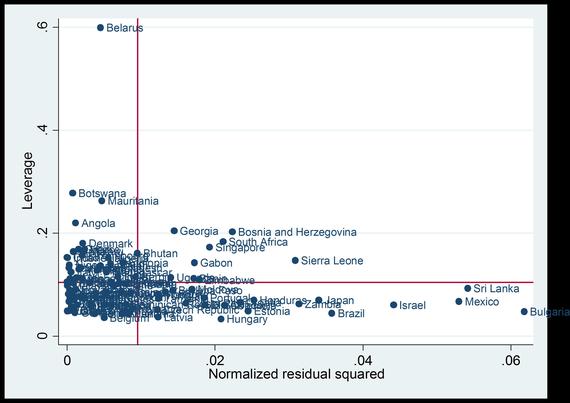 III. The Way Out: Happiness as a Macro-Micro Equilibrium
My analysis adds to the existing literature a robust way of examining the potential factors that influence average national happiness level, by incorporating both macroeconomic and microeconomic components in the analysis.

While designing policies focusing on economic growth, equal attentions are deserved to improve health systems, to build a more efficient government, to prove more social support and to create a more favorable living environment. As my study suggests, happiness shall be a universal concept and individual well-being shall enter into both macro and micro areas as an important concept. Languages spoken by people of the country might also be taken into consideration. According to Keith Chen (2013), language could influence people's economic behavior, including savings rates, health behaviors and retirement assets. It is therefore further hypothesized that languages spoken by people might play a role in determining happiness level.

Therefore, instead of focusing on the mere number indicating economic growth, governments shall put more weight on the well-being of individuals. It is therefore suggested that a certain proportion of budget be allocated to improve the health systems and social welfare systems. Meanwhile, a more efficient government without corruption is highly advocated.