On a corner in Anacortes, Wash., months before the 2012 presidential election, Republicans and Democrats stood, holding signs and yelling about whose political ideology was the right one.

Laura Lavigne decided she, too, wanted to stand on that corner. But she wouldn't wear red or blue -- she'd wear yellow. And she'd hold up a sign that'd spread a different ideology: happiness.

Lavigne and some friends gathered at the corner on May 22. Each person held a black and white sign. The messages were simple: "You Rock!," "Be YOU," "You Are Enough" and "You Are Loved," to name a few. Their goal was equally simple: To make passersby happy and perhaps turn someone's bad day around.

"That was the first day of Happiness Sprinkling Project," Lavigne told The Huffington Post. 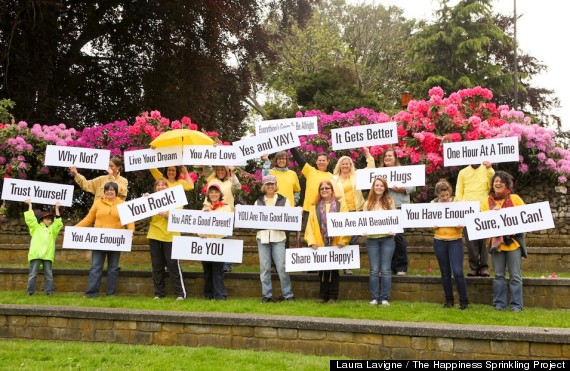 Lavigne, a life coach and the founder of the Anacortes Center for Happiness, has since organized "happiness sprinkling" groups throughout the U.S. and Canada. The most recent one hit Riverside, Calif., on Tuesday. At each gathering, people hold Lavigne's original signs for a few hours -- the hosting town then mails the signs to the next location. Sometimes the groups play music, sometimes they dance, sometimes they invite strangers to join along.

In almost two years, more than 40 cities have been "sprinkled," according to Lavigne. And the requests keep coming in. She's currently trying to figure out how to send the signs to Italy. 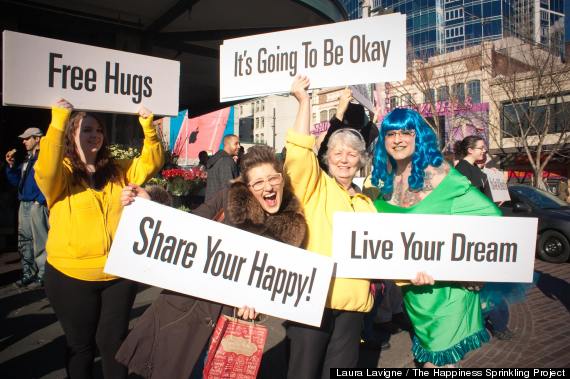 Lavigne doesn't make a profit off the Happiness Sprinkling Project. "It's just plain joy for the sake of joy," she says.

"I think we all walk around with worry and questions," Lavigne told HuffPost. "Sometimes just a stranger coming up to you with those words out of nowhere can shift us."

Lavigne told HuffPost that wearing yellow and holding the original signs are the project's only stipulations.

But Susan Shields was the exception.

Last June, Shields, a 59-year-old from Ames, Iowa, was battling cancer when she missed her town's "sprinkling," Lavigne told HuffPost. When Shields reached out to the organization and asked them to hold another, they planned a second gathering and sent the signs back to Ames that October. But, surrounded by people in yellow shirts on her 60th birthday, Shields held her own sign that read, "Life is good."

Shields died shortly after, according to Lavigne. But her memory is what the Happiness Sprinkling Project is all about -- "Life is good" is now a permanent sign. 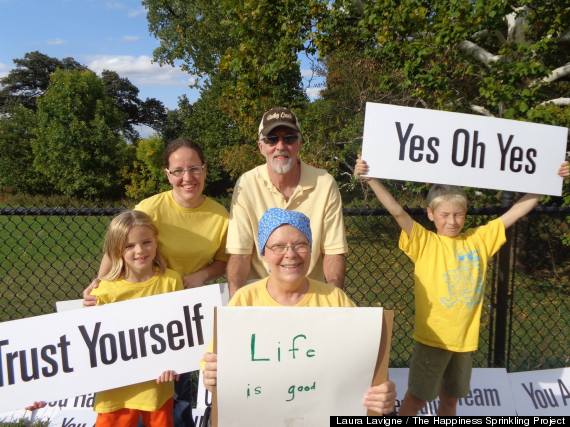 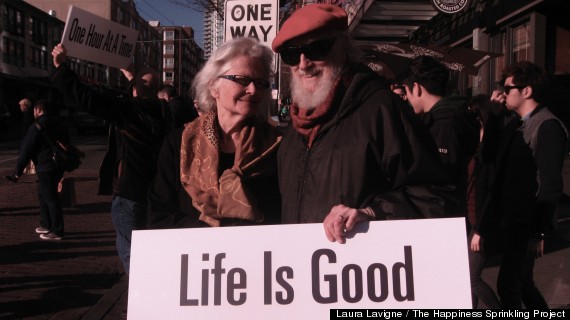 Lavigne has dedicated her life to spreading happiness because she believes in its importance.

"I don't want people to underestimate the power they have to make someone's day by a smile, a touch on the arm, eye contact," Lavigne told HuffPost. "What I'm learning through doing this is how tender we all are and how little it takes to turn someone's day around."

To keep up with the Happiness Sprinkling Project, head to its Facebook page.