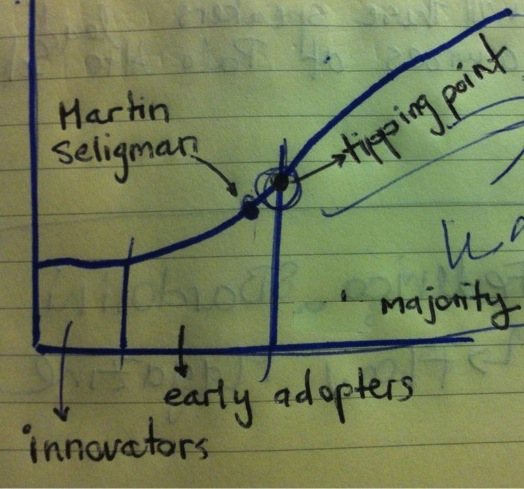 "I think it's here," Prof. Martin Seligman said as he made a blue dot only millimeters to the left of the tipping point on the diffusion of innovations graph I had sketched in my Moleskine notebook. Martin Seligman, the "father of positive psychology," had just lectured on Well-being at Work to over 500 business professionals at the Positive Business Forum in Milan. The two-day conference can be understood as the latest manifestation of a larger global phenomenon, labeled by the media as the "happiness movement" or "happiness industry." With initiatives springing up in every sector -- academic, cultural, spiritual, economic, public and private -- what is the big picture? Does it matter? And are we actually approaching a tipping point?

The origins of this growing phenomenon go back to what has popularly been called the "science of happiness" or, in more scholarly terms, Positive Psychology. In his book Flourish, Prof. Seligman explains that while the goal of psychology has traditionally been to relieve human suffering, the goal of positive psychology -- a field that is just 15 years old -- is different. It is about actually raising the bar for the human condition and enabling individuals and communities to flourish.

Since the field's humble beginnings in the late '90s, it has seen considerable growth. In 1999, the late Philip J. Stone, Professor of Psychology at Harvard University, taught one of the first positive psychology courses to just 20 students. Ten years later, the landscape had changed. You can find over 200 university courses across the United States, a master's degree program at the University of Pennsylvania and almost 1,000 articles related to the field published in peer-reviewed journals. Other fields have taken notice, too. In 2003, London School of Economics Professor Richard Layard founded the Wellbeing Program after giving a series of public lectures titled Happiness: Has Social Science a Clue? The publication of his book, Happiness: Lessons from a New Science, soon followed and set the stage for a major upswing in interest in "happiness economics."

As with several big, potentially game-changing ideas in the past 15 years -- think Facebook, Google and WordPress -- university students are at the forefront of their implementation. The happiness phenomenon is no exception to this pattern. On a national level, USA Today ran a story just last month on how "Happiness Clubs Spread Positive Vibes on Campus." In the same month, the topic also surfaced in the oldest student-run daily newspaper, the Yale Daily News, which devoted its monthly magazine to college happiness movements.

So might this indicate that Prof. Seligman is right? A tipping point is defined as the point at which the buildup of minor incidents cause a larger, more significant change. So, is all this activity at universities going to tip this world towards happiness? Certainly, some of the world's most influential social movements started on university campuses. And yet, I'll refrain from carving out this argument any further because it is not just about what is unfolding on some American college campus. The most powerful evidence can be uncovered in "the real world."

On a policy level, happiness made its debut on the world stage on March 20, 2013, when the first official United Nations International Day of Happiness took place. This was only months after the UN had released its inaugural World Happiness Report and England adopted the "Wellbeing Index." As the first country in the Western hemisphere, England now complements the Gross Domestic Product figure with the Wellbeing Index "to measure what matters most."

Politics is a reactive force rooted in a wide array of community organizations, artistic initiatives and popular support. In the case of happiness, the most notable community organizations are the London-based non-governmental organization Action for Happiness, Sustainable Seattle's Happiness Initiative and the New York-based H(app)athon project. As for the arts, the popular documentary HAPPY comes to mind, as does graphic designer Stefan Sagmeister's currently displayed Happy Show exhibition at the Los Angeles Museum of Contemporary Art and Jonathan Harris' remarkable interactive art project, Balloons of Bhutan.

When academia, politics and the arts are on to something, business cannot be far. On the consumer side, a keen observer will note the ever-increasing number of books, magazines, blogs, online courses and conferences on happiness-related topics. But it is not just a consumer demand that the business sector seeks to satisfy. Ever since Tony Hsieh, CEO of Zappos, authored the #1 New York Times bestseller Delivering Happiness - A Path to Profits, Purpose and Passion, and Google became famous for its culture of workplace satisfaction, happiness is perceived as a powerful competitive advantage in the job market as well. This idea received so much traction that the Harvard Business Review picked it up and devoted its entire January-February 2012 issue to the Value of Happiness: How Employee Well-being Drives Profits. This argument has also recently gained momentum in Europe, in part due to the inaugural Positive Business Forum in Milan in March 2013. Hundreds of human resource professionals diligently took notes as Shawn Achor lectured on The Happiness Advantage and Paul Zak explained the neuroscientific link between purpose and employee happiness.

The forum also brings me back to Prof. Seligman. After decades of scientific study, he makes one point very clear: happiness is not about smiley faces, unicorns and light-hearted merriment. Nor is it about self-proclaimed gurus and their self-help anecdotes of supposed enlightenment. When put in these contexts, happiness becomes an unworkable term for science or for any practical goal such as education, therapy, public policy, or even just changing your personal life, according to Prof. Seligman. Rather, happiness -- or "well-being" as he prefers to call it -- should be understood as a comprehensive, holistic framework consisting of five measurable and buildable components summarized by the acronym P.E.R.M.A. (Positive Emotion, Engagement, Positive Relationships, Meaning and Accomplishment). It is this scientifically grounded understanding that lies at the heart of the global happiness phenomenon this article and many "happiness" experts seek to portray. And it is a much needed understanding too. With burn-out, stress and depression rates skyrocketing and mental health costs in 2010 hitting $2.5 trillion globally, we must find ways to reverse this shocking development.

Coming back to my initial question of whether we are reaching a tipping point, the answers appears to be as follows: Some fascinating and potentially powerful happiness-related frameworks and initiatives exist on multiple levels and across geographic regions. Happiness matters for many reasons, but most of all, because business as usual is leading to a staggering increase in mental disorders, mental health costs and a massive loss of human potential. Arguably, it should therefore become a key agenda item in boardroom meetings and at policy roundtables. Yet, it remains to be seen who and what will hit off the tipping point.