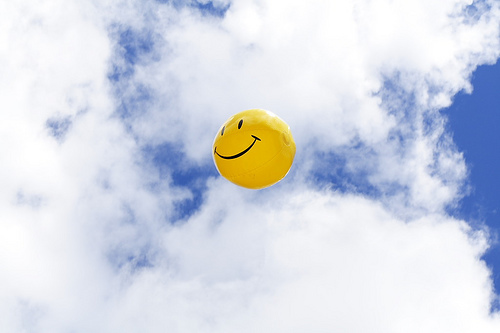 When we're asked what our ultimate life goal is, we often reply, "to be happy."

Happiness is certainly a worthwhile life goal, especially if by "happiness" we mean the Greek eudaimonia, which Daniel Gilbert, in Stumbling on Happiness, translates as "good spirit ... human flourishing ... [and] life well lived."

But do we ever ask, "Why pursue happiness?" The question itself sounds subversive, even anti-American.

Let me assure you I am emphasizing the verb, not the direct object, in that question.

Though we're obsessed with pursuing happiness, many experts would tell us that our very pursuit is what sabotages our efforts to find it.

In his classic work Flow: The Psychology of Optimal Experience, psychologist Mihaly Csikszentmihalyi writes, "It is by being fully involved with every detail of our lives, whether good or bad, that we find happiness, not by trying to look for it directly."

Happiness is a byproduct of an engaged, connected, and meaningful life. Yet we still pursue happiness as if it were the ultimate goal, as if it existed somehow in a vacuum.

In The Antidote: Happiness for People Who Can't Stand Positive Thinking, Oliver Burkeman challenges the conventional wisdom about happiness, as well as the advice of motivational speakers, for they continually persuade us to pursue pathways to happiness that are not borne out by the research. Burkeman advocates what he calls the "negative path" to happiness, in that it involves embracing the negative, as well as a more relaxed not-doing. He suggests several ways that we need to think differently about happiness.

1. Instead of positive thinking, practice mindful, nonjudgmental awareness of your thoughts.

Motivational speakers tell people to think positively and banish the word "impossible!" There's no room for negativity if you want to be happy!

But tell someone to think only positive thoughts, and what do they think about? All those negative thoughts running through their mind! In fact, putting effort into positive thinking only draws more attention to our negative self-talk, because we are looking for it... and then we get mad at ourselves for not being more positive!

Instead of banishing negative thoughts (which is nigh impossible), we should bring our mindful awareness to them, examining them with calm indifference. We cannot overcome our negative thoughts by simply denying or repressing them -- mindfulness teaches us to acknowledge them, but not be driven by them.

2. Instead of setting audacious goals for success, practice non-attachment to the outcome of your actions.

Burkeman cites several corporations that have abandoned goal-setting, after finding goal-odicy often had unintended consequences, such as diverting resources away from other important work and ignoring (or even covering up) evidence of failure.

Goals can also be limiting. Ever wonder why it's so hard to get a taxi in New York City when it's raining? It's not just supply and demand. Taxi drivers work to meet a quota each day; when they've hit their goal, their day is done. On a rainy day, they hit their goal sooner, so most decide to end their shift early, and there really ARE fewer cabs on the street! Often, our goals limit our pursuit of maximum happiness (additional income and dry commutes for all).

If we ask people to focus instead on form, and not on the end result, they actually perform better. Burkeman argues we're better off if we don't "strive too ardently for any single vision of the future."

3. Instead of seeking stability, dance with uncertainty and even failure.

So much of our pursuit of happiness consists of seeking stability and permanence, when those things don't really exist. Buddhism, and biology, teach us that we are a constantly shifting collection of cells, thoughts, emotions, breath, sensations, and form. We are impermanent. We are always changing, flowing just like that river we can never step in twice. So why do we pursue something that doesn't exist? Burkeman advises, "The point is not to 'confront' insecurity, but to appreciate that you are it."

If you fail, embrace it. We need to think like scientists, who learn as much from the experiment that fails as the one that succeeds. Dance with your uncertainty.

And be wary of those books that identify all the criteria of "successful" people (risk-taking, goal-setting, teeth-brushing, etc.) -- those things probably characterize unsuccessful people, too. But researchers usually don't study them.

4. Instead of envisioning your completely satisfied self, consider the worst possible scenarios.

This seems to fly in the face of the advice of many popular self-help titles in which people are told to envision themselves holding their ideal job or completing the great American novel. While daydreaming can have positive psychological benefits, researcher Gabrielle Oettingen has found that "spending time and energy thinking about how well things could go ... actually reduces most people's motivation to achieve them." Visualizing the good outcome produces relaxed and happy thoughts, which, to the brain, feel just like actually having accomplished it!

Burkeman instead recommends envisioning the worst case scenario. This will likely will remind us that 1) we can find a way to cope with the negative outcomes, and 2) most often, things rarely go as wrong as we fear they will. Daniel Gilbert writes, "anticipating unpleasant events can minimize their impact.... [F]ear, worry, and anxiety have useful roles to play in our lives ... [and] motivate people to engage in prudent, prophylactic behavior."

5. Instead of waiting for inspiration, just do it!

If, as Daniel Gilbert writes, happiness comes through "being effective -- changing things, influencing things, making things happen," and, as Csikszentmihalyi states, it occurs "when a person's body or mind is stretched to its limits in a voluntary effort to accomplish something difficult and worthwhile," then we need to take action.

Burkeman claims that the problem with much of the self-help literature, and with motivational speakers, is that they're about "how to feel in the mood for getting things done." But feeling like doing something, and actually doing it, are two different things. If, instead of waiting for inspiration, we take "a non-attached stance towards procrastination," we'll discover that our "reluctance about working isn't something that needs to be eradicated or transformed into positivity.... [We] can note the procrastinatory feelings and act anyway."

This negative path to happiness suggests we abandon our pursuit, and instead practice mindfulness, embrace uncertainty and insecurity, drop our obsession with goals, and take inspired action. That sounds pretty positive to me.