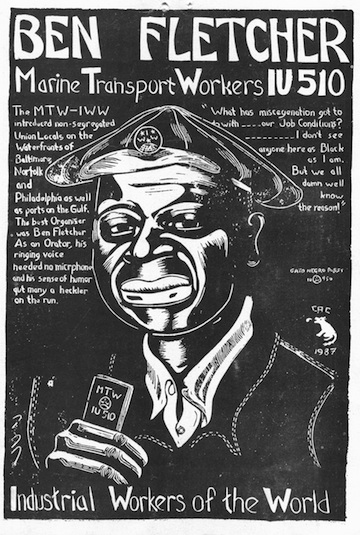 By Tukufu Zuberi and Peter Cole

This week we celebrate the centennial of the founding of Philadelphia's most historically important and interesting labor union--the Industrial Workers of the World (IWW, nicknamed the Wobblies). Sadly, you may be like most, and have never heard of this union. Nevertheless, the five thousand men who founded Local 8 deserve to be not only remembered but also emulated for overcoming intense economic, ethnic, and racial prejudices to form a union that improved their lives and more deeply sowed the seeds of equality in the City of Brotherly Love. African Americans have a long history of fighting to redefine freedom on the Delaware River. Among the 20th century leaders who carried this banner was Ben Fletcher, one of the most important African American organizers in the history of Philadelphia.

Local 8 represented longshoremen--at that time, there were no women on the waterfront. The longshoremen's work lives were miserable. They toiled long hours, sometimes thirty-six hours straight for "the ship must sail on time." The work proved incredibly dangerous, as it was easy to fall into a hold, for a cargo sling lifting several tons to snap, or to slip on a wet deck on a dark night. The work paid poorly and was irregular. Even getting hired was an enormous challenge. Yet, employers enjoyed huge profits because of the desperate poverty among the hundreds of thousands of European immigrants and African American migrants from the South streaming into the industrial giant of Philadelphia, which manufactured everything "from battleships to buttonhooks."

Ben Fletcher and the IWW entered this world in the early 1900s. Fletcher was born in Philadelphia to parents who had moved, in the late 19th century, from Virginia and Maryland. Fletcher was a radical, a member of the IWW as well as the recently formed Socialist Party. He was committed to overthrowing the capitalist system that exploited the hard work of the nation's majority so that a few could amass fortunes. As another Wobbly said at the time, "I've never read Marx but I've got the marks of capital all over me." The Wobblies believed in building a new order but also in getting a better deal for workers in the here and now.

Of course, organizing longshoremen meant convincing native born-whites that ethnic and racial discrimination was less important than a united workforce. In this regard, the Wobblies were ahead of their time and many would argue they still are. They were fiercely committed to fighting racism, xenophobia, and other forms of prejudice that weakened ordinary people and only benefited their bosses.

Nevertheless, Fletcher and other Wobbly organizers convinced Philadelphia's longshoremen to join together in "one big union." In May 1913, after two weeks on strike that effectively shut down the port--one of the nation's largest at the time--they won significant raises and established their union.

Over the next decade, Local 8 was one of the most fully integrated institutions in the United States. In the 1910s there was a handful of truly integrated and egalitarian organizations. Fletcher and other African Americans shared leadership posts with Poles, Lithuanians, Swedish Americans, and Irish Americans. Under the leadership of the IWW their wages improved, as did their work conditions.

Around the 1920's, native-born whites became increasingly concerned about immigration, ethnicity, religion, and racial change. Many were concerned about African Americans leaving the south and moving north, seeking better economic opportunities. Others felt that African Americans had become "arrogant" after fighting in World War I. The Klan found new life in the Midwest, West, and the North. In the years after World War I, a huge backlash against African Americans, immigrants, and unions occurred that ultimately destroyed Local 8. However, the idea of a longshore union on the Delaware River and of integration lived on.

Later in the 1920s, another union arose on the waterfront, the International Longshoremen's Association (ILA). This union was not nearly as progressive as the IWW, it did help longshoremen achieve middle class lifestyles and include both black and white members, yet it reinstituted the Jim Crow practices, which highlighted this era of separate and unequal. The union has come a long way since these old backward days. ILA 1291--to this day--represents Philadelphia-area longshore workers though, as with other unions, it has been weakened by decades of employer assaults upon them and a lack of cohesion within the union itself.

Philadelphia's own Independence Seaport Museum just opened a wonderful new exhibit, Tides of Freedom: African Presence on the Delaware River, curated by Tukufu Zuberi. This show highlights, among others, an African American from Philadelphia named Royce Adams. Adams has fought for decades to make sure that working people have a living wage and to abolish the color line. A leader in the global fight against apartheid in South Africa, he has fought long and hard to bring racial equality home as well as abroad.

Join us in celebrating Local 8's birthday, a shining star in the labor movement "that brought you the weekend." Even better, visit the Tides of Freedom exhibit to learn more about the African Americans who contributed to the great maritime history of Philadelphia.

"[We] respect the Industrial Workers of the World as one of the social and political movements in modern times that draws no color line." -W.E.B. Du Bois in the Crisis, June 1919

Peter Cole is a Professor of History at Western Illinois University in Macomb and author of Wobblies on the Waterfront: Interracial Unionism in Progressive-Era Philadelphia.