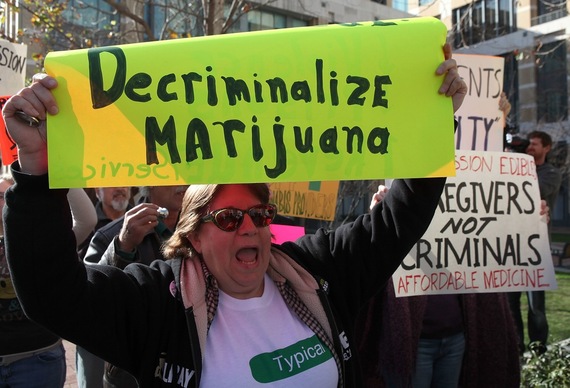 Marijuana has been sold for recreational use in Colorado and Washington state since 2014. Things seem to be going pretty smoothly, on the whole. There has been some trouble with edible dosages -- notably in the case of the Colorado man who killed his wife while high on a brownie. Still, most consumers are being responsible, and Colorado and Washington both fetched $70 million in tax revenue in the last fiscal year. Those figures are only supposed to increase.

Last November, Oregon, Alaska and D.C. joined the other two states by passing recreational legislation. So, how is it going?

It's going ... just OK. As of February, residents of the District can consume weed as well as grow it and share in small quantities. But they can't buy it. As with just about anything else, Congress is to blame.

Alaska, like D.C., ain't exactly open for business. The tricky and unusual aspect of the Last Frontier's situation is that marijuana consumption and cultivation has actually been legal for almost 40 years. Now, the state is attempting to regulate it. The Marijuana Control Board has until November 24th to set up retail and cultivation rules for the state. The latest set of rules is here and Alaska is in kind of a holding pattern until they are adopted. Then, licenses have to be approved and so on and so forth. You probably won't see the first joint sold retail in Alaska until the end of 2016.

"Frankly, I don't know if we have answers to your questions yet," The Oregonian staff writer Noelle Crombie tells me. "There's still a lot we don't know about the regulated recreational market in Oregon."

Crombie covers the marijuana beat for the Portland daily newspaper and points out some differences. She says:

The law directs the Oregon Liquor Control Commission to set up the framework for an industry it will ultimately regulate. Under the original timeline, stores would roll out sometime in late 2016. Changes to statutes related to marijuana possession, however, changed in July of 2015. Some key Oregon lawmakers thought the gap in timing between legal possession and legal purchases was too great, so they approved a temporary early sales program under which hundreds of existing medical marijuana dispensaries would be allowed to sell to 21-plus customers starting October 1st. The stores, which are overseen by the Oregon Health Authority, didn't have to do much to sign up for legal sales. So, right away we had something like 200 stores eligible to sell to the rec market on day one, which sets Oregon apart from Colorado and Washington.

Crombie also highlights that there are no edibles or concentrates for sale in Oregon. And there was a minor hiccup with a shop giving, um, product away. It was fined. "Also, no taxes," she says. "Oregon's taxes on marijuana won't kick in until January 2016, so the market opened with an immediate tax holiday." Buy your plane tickets now, people.

"How have sales gone? Hard to say," Crombie adds. "The state isn't tracking sales at this point. There was one widely disputed report from an industry group that claimed $11 million in rec sales on week one. The shops I've spoken with have said they did terrific business on day one and then things stabilized. Portland has tons of shops so it's hard to make general statements about how well they are doing." Crombie adds that next year's regulations have been approved by the Oregon Liquor Control Commission.