It seems like just yesterday that Republicans, wingnuts and teabaggers suffered a collective schizoid embolism over the passage and signing of the American Recovery and Reinvestment Act.

One year ago today, the president signed the bill amidst protestations from Fox News, talk radio and Rick Santelli about how the "porkulus" spending bill wouldn't work -- how it wouldn't stimulate economic growth or create jobs. It was called generational theft, socialism, communism, Nazism and any other -ism that could be quickly plucked from the glossary of Glenn Beck's fifth grade social studies textbook.

Nearly all Republican members of Congress voted against it -- the first shot in their "trash and cash" strategy whereby they screech about the evil stimulus and how it's an unmitigated catastrophe, while also gleefully celebrating the incoming cash in their districts, scores of Republican lawmakers outright begging various cabinet-level agencies for stimulus grant money. In all, 111 members of Congress have engaged in this hypocrisy. One of many reasons why they're consistent only in their unapologetic self-contradictions.

And, at the end of the day, they can get away with it because of annoyingly common misconceptions about the bill. Chief among these misconceptions is the mixing up of the stimulus and the bailout. A recent CNN poll shows that only 25 percent of Americans think the stimulus helped the middle class, while a majority think it helped bankers. Of course the stimulus had nothing to do with bankers.

CNN Polling Director Keating Holland: "It's possible that the belief that the stimulus bill helped bankers and CEOs is due to the public confusing the stimulus bill with the various bailout bills that were passed at roughly the same time last year."

So let's clear this up.

The American Recovery and Reinvestment Act is "the stimulus." Those signs you see along the highway just before driving onto super-smooth new asphalt? That's the stimulus. The recovery act. When you hear "stimulus," it references this $787 billion spending bill, and it contains the following key provisions.

1) Financial assistance to states that were about to fire scores of workers, from firefighters to police officers to teachers, as well as an extension of unemployment benefits and generous COBRA health insurance subsidies. 2) Spending on new infrastructure and manufacturing: those newly smoothed roads and highways on your commute to work, along with spending on transit and green energy technology. 3) The largest middle class tax cut in American history -- $288 billion in tax relief which, I might add, every Republican (save for three) voted against.

TARP, on the other hand, is not the stimulus. The Troubled Asset Relief Program is the $700 billion bank bailout signed by George W. Bush. Not to get too remedial with this, but hundreds of banks were rescued with this money. Some of the larger ones have paid the money back, and others haven't. For example, the piddly little bank that owns my mortgage here in Pennsylvania received $300,000,000 in TARP funds. It's repaid only around $13 million. But when you hear someone talking about the bailout, they're talking about this program. Not the stimulus. The stimulus is the recovery act.

If I were to pinpoint the Obama administration's first political mistake, it would have to be the piss poor framing of the stimulus. From the outset, they should've called it "the recovery bill" or "the recovery plan" or "the jobs bill" but somehow the word "stimulus" was injected into the debate and unfortunately it stuck. A year ago, in fact, it was mainly known as "the stimulus package," which sounds a little bit like a sex toy. Now it's just "the stimulus." Nevertheless, with such a technocratic frame, it's been easier for people to confuse it with the bank bailout, and it's been easier for Republicans to take advantage of this confusion. (Incidentally, the administration's first big policy mistake was to lowball the dollar amount of the stimulus in the name of bipartisan compromise.)

But the question remains: has it worked? The answer is an unequivocal "yes." Despite the fact that the amount was lower than it should have been, the recovery act has not only been successful in preventing a second Great Depression, but contrary to the far-right's fear-mongering, we're not an enslaved Nazi-commie OLIGARHY controlled by a radical Muslim tyrant because of it.

Remember a year ago when Sean Hannity and others were breathlessly repeating the phrase "The Obama Bear Market?" Well, here's the DJIA since Fall 2008.

You might be saying, Good for Wall Street. But what about me? The snark is partly justified, but at the same time, with a recovering Dow, we're also seeing the recovery of 401(k) retirement plans, mutual funds and other market driven investments held by average Americans. So yes, Wall Street continues to get away with murder, but the recovery of the Dow is not entirely in favor of the crooks.

Let's say, though, that the visibly upward slope of the Dow beginning just after the passage of the recovery act is a coincidence. What about jobs? The following chart has been widely circulated recently: 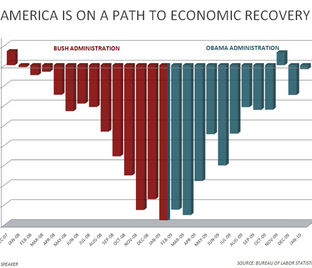 Perhaps the best-known economic research firms are IHS Global Insight, Macroeconomic Advisers and Moody's Economy.com. They all estimate that the bill has added 1.6 million to 1.8 million jobs so far and that its ultimate impact will be roughly 2.5 million jobs. The Congressional Budget Office, an independent agency, considers these estimates to be conservative.

1.8 million new jobs on its way to 2.5 million new jobs. And that's somehow a failure? Unemployment is still high, and another spending bill is mandatory to really bring that number down, but the above chart clearly illustrates that the jobs are coming back. Not as quickly as we'd all prefer, but there they are. It's also worth noting that the recovery act kept "6 million Americans out of poverty and reducing the severity of poverty for 33 million more," according to the Center on Budget Policy Priorities.

And finally, what about the economy as a whole? Has the stimulus actually stimulated economic growth, as promised. Here's the GDP chart: 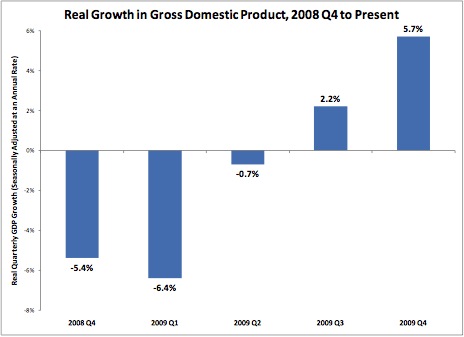 There's no gray area here. The recovery act has worked. For now. I believe we still need serious health care reform in the mix, and, of course, the major caveat here is that nothing is permanent. A sudden and premature shift to deficit reduction and spending cuts, or a failure on health care reform could instigate a backslide.

Referencing back, though, to what I wrote last week, another key factor here is the ability for the Democrats in Congress and the White House to get loud about these successes. So far, the message hasn't really broken through the wingnut noise. Consequently, most Americans think their taxes are being raised and the recovery act hasn't worked. Both are untrue. Who's to blame? I would suggest it's the Democrats who are mostly good on policy, but notoriously awful at framing and bragging.

Regardless of the inability of the Democrats to sell their most successful policies, along with the inability of the Republicans to tell the truth about all of those check-cashing ceremonies they're attending, the recovery act has worked. But while there's much to be proud of, merely rescuing the economy from the brink isn't enough. The thing needs to be made prosperous again, and it needs to achieve this without quick-fix bubbles. I tend to believe that in four or five years, the economy will be cranking along with sustainable growth. I also believe that had the Republicans been in charge, we'd all be living in hollowed out moose carcasses for warmth -- without an angry tea party in sight.