"Only You Can Prevent Forest Fires." "Friends Don't Let Friends Drive Drunk." "Loose Lips Sink Ships." "Take a Bite Out of Crime. "A Mind is a Terrible Thing to Waste." You've heard these slogans, right? Whether you're old enough to remember them or they're familiar because they've seeped through our popular culture (Rosie the Riveter paraphernalia is everywhere these days), they ring a bell. They're memorable and iconic. And they were created by the Ad Council.

We've been at it for 70 years. It all started back in 1942, when a small group of men -- the leading advertising executives of the day -- were invited by FDR to the White House. They were asked to dedicate their best and brightest to help rally Americans around the war effort -- to ask the public to pitch in, plant a victory garden, buy a war bond. And they did it hand-in-hand with the titans of the media, who donated valuable space to these early public service advertisements (PSAs). Seven decades ago, the advertising and media industries answered the call to help the nation and they've been doing it ever since.

You know about Rosie the Riveter, but did you know that she helped recruit over two million women to join the workforce during the war? And that PSAs about the polio vaccine in the early '60s helped increase inoculations to over 90 million? We also worked with the American Red Cross for over 50 years on campaigns to recruit blood donors, enlist volunteers and raise funds for their life-saving work. And almost immediately after ads featuring "The Toughest Job You'll Ever Love," 30,000 young people applied to the Peace Corps. When child abuse was a hidden crisis, PSA campaigns talked about it, resulting in nine in 10 people coming to recognize that it was a major social problem. Simply put, our PSAs reflect the social condition of our times.

In the '70s we tackled environmental issues (remember the Crying Indian, the focus of our anti-littering campaign?) and in the '80s, it was the tragedy of AIDS that initiated several campaigns, including one where the Ad Council became the first to use the word "condom" in an ad. It was also that time period when the Crash Test Dummies were introduced and advertising (along with new laws) helped increase seat belt use from 14 percent to 85 percent, saving countless lives.

Today, we're communicating about bullying, obesity and the foreclosure crisis, and raising awareness about the early warning signs of autism.

After 70 years, it's safe to say we have had a few changes. What's stayed the same?

We're still committed to tackling the most pressing social issues of our time. That's our mission and it'll never change.

We've had the unwavering support of the ad industry -- in fact we've had the same agencies for Smokey Bear and the United Negro College Fund for over 65 and 40 years, respectively. And while it's no longer a three-network -- ABC, NBC, CBS -- world, we continue to receive incredible support from the media: over $1.5 billion each year from TV, radio, print, outdoor and online media properties.

What's changed? We all know the answer to this. There's no simple way to reach the consumer anymore. We're getting our news, email, social networking in so many forms and platforms. So, we've had to evolve like everyone else -- yes, Smokey has a Facebook page -- all of our campaigns must adapt to the ever-changing media landscape.

An anniversary is typically a time for reflection and perhaps, of what's to come. Today, we're living in such challenging times. People are really suffering -- they've lost jobs, their homes, their life savings, spouses to the war. Seventy years ago, Americans were trying to crawl out of the Depression, facing unemployment, poverty, war. I won't try to compare the two times -- it's impossible. But what strikes me is the Ad Council had its roots in helping America face adversity and we're still doing it today. And I suspect we'll be doing it for another 70 years.

In celebration of this landmark anniversary, tell me what your favorite campaign is, or what has had the most significant impact on your life.

You can also "rosify" yourself using our new Facebook app, created as part of the celebration of our 70th birthday. Here's mine below: 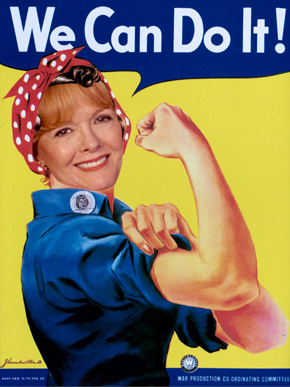 President and CEO, The Advertising Council